This article describes the containers in which milk may be kept. Wikipedia does not have an article on the British sweet of the same name. 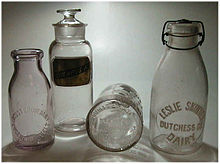 Examples of milk bottles from the late 19th century made by the Warren Glass Works Company.

Milk bottles are bottles used for milk. They may be reusable glass bottles used mainly for doorstep delivery of fresh milk by milkmen. Customers are expected to rinse the empty bottles and leave on the doorstep for collection. The standard size of a bottle varies with location; common sizes are 1 pint or 1 quart, although cream may be delivered in smaller bottles.

More recently, plastic bottles have been commonly used for milk. These are often made of high-density polyethylene (HDPE), are used only once, and are easily recycleable. 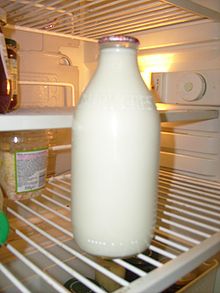 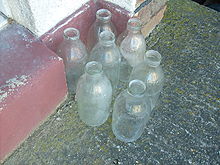 Before milk bottles, milkmen filled the customers' jugs. For many collectors, milk bottles carry a nostalgic quality of a bygone age. The most prized milk bottles are embosed or pyroglazed (painted) with names of dairies on them, which were used for home delivery of milk so that the milk bottles could find their way back to.

It is not clear when the first milk bottles came into use. However, the New York Dairy Company is credited with having the first factory that produced milk bottles, and the first patents for a milk container is held by the Lester Milk Jar on January 29, 1878 - US patent number 199837, filed on September 22, 1877 [1]). There are many other similar milk containers from around this period, including the Mackworh Pure Jersey Cream crockery type jar, the Manorfield Stock Farm, the Manor, the Pa glass wide mouth jar, and the Tuthill's Dairy Unionville, NY.

Lewis P. Whiteman holds the first patent for a glass milk bottle with a small glass lid and a tin clip (US patent number 225,900, granted March 23, 1880, filed on January 31, 1880 [2]). The next earliest patent is for a milk bottle with a dome type tin cap and was granted September 23, 1884 to Whitemen's brother, Abram V. Whiteman (US patent number 305,554, filed on January 31, 1880 [3]). This bottle has been found with cream line marks and is very valuable. The Whiteman brothers produced milk bottles based on these specifications at the Warren Glass Works Company in Cumberland, Maryland and sold them through their New York sales office.

The Original Thatcher is one of the most desirable milk bottles for collectors. The patent for the glass dome lid is dated April 27, 1886. There are several variations of this early milk bottle and many reproductions. During this time period, many types of bottles were being used to hold and distribute milk. These include a pop bottle type with a wire clamp, used by the Chicago Sterilized Milk Company, Sweet Clover, and others. Fruit jars were also used, but only the Cohansey Glass Manufacturing plant made them with dairy names embossed on them.

The commonsense milk bottle with the first cap seat was developed as an economical means for sealing a reusable milk bottle by the Thatcher Manufacturing Company around 1900. Most bottles produced after this time have a cap seat.

Milk bottles before the 1930s were round. In the 1940s, a square squat bottle become the more popular style. Milk bottles since the 1930s have used pyroglaze or ACL (Applied Color Label) to identify the bottles. Before the 1930s, names were embossed on milk bottles using a slug plate. The name was impressed on the slug plate, then the plate was inserted into the mold used to make the bottle - the result was the embossed name on the bottle. By the 1960s, in the United States, glass bottles had largely been replaced with paper cartons.

In some locations, silver, red, blue, yellow or striped aluminium tops on today's bottles indicate the fat content. Unpasteurised is green-topped. Other dairies use other color designations. Bottles may also be marked or stamped with the name of the dairy.

In the United Kingdom, milk sold to the door is still be in Imperial pints (but labelled 568ml), because the glass bottles are 'returnable', which means they were excluded from metrication. Often, in supermarkets they are sold in pints but labelled with their metric equivalent (568ml). Quantities larger than a pint are generally sold in metric units or multiples of a pint.

With lesser milk consumption, milk in Hong Kong is sold in both glass and plastic bottles.

Orange juice is also sold in doorstep deliveries in the same style of bottle used for milk. Typically these have an orange top[citation needed].

In some countries, it is common to buy milk in a milk bag