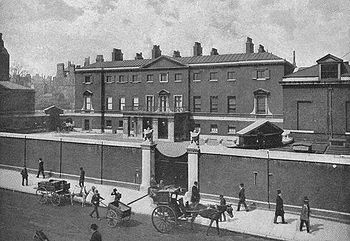 Devonshire House in Piccadilly was the London residence of the Dukes of Devonshire in the 18th and 19th centuries. It was built for William Cavendish, 3rd Duke of Devonshire in the Palladian style, to designs by William Kent. Completed circa 1740, empty after World War I, it was demolished in 1924.

Before the early 20th century, many of Britain's peers maintained large London houses which carried their name, As a ducal house (only in mainland Europe were such houses referred to as palaces) Devonshire House was one of the largest and grandest, ranking alongside Burlington House, Montague House, Lansdowne House, Londonderry House Northumberland House and Norfolk House. All of these, like most of the great London free-standing houses are now long demolished, apart from Burlington and Lansdowne (which have both been substantially altered).

Today, the site is occupied by offices, known as Devonshire House. 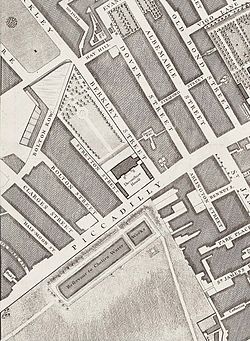 Devonshire House was built on the site of Berkeley House, which John, Lord Berkeley, erected at a cost of over £30,000 on his return from his tenure of the viceroyalty of Ireland; it was constructed from 1665 to 1673. The house was later occupied by Barbara Villiers, Duchess of Cleveland, a mistress of Charles II. The house, a classical mansion built by Hugh May, had been purchased by William Cavendish, 1st Duke of Devonshire in 1697 and subsequently renamed Devonshire House.

On 16 October 1733, the former Berkeley House, while undergoing refurbishment, was destroyed by fire. The cause was attributed to careless labourers.[1] Ironically, the Duke's former London residence, Old Devonshire House, at 48 Boswell Street, Bloomsbury, survived both its successors until the Blitz of World War II.

During the 18th century, existing forms of entertainment began to change and large sophisticated receptions came into fashion, often taking the form of concerts and balls. Initially, hosts would hire one of many new assembly rooms built to indulge the fashion. However, it was not long before the more frequent and wealthy hosts began to add a ballroom to their town houses and the more wealthy still to forsake their smaller town houses in favour of a new and vast palace designed purely for entertaining. The Duke of Devonshire, an owner of vast estates, belonged to the latter category.[2] Thus the fire of the Devonshire House in 1733 provided the opportunity to build a house at the height of contemporary fashion.

For his architect, the Duke chose the fashionable architect William Kent, for whom this was a first commission for a London house. The house was constructed between 1734 and about 1740.[3] Kent was the protegee of the immensely cultivated 3rd Earl of Burlington and had worked at Chiswick House, built by the 3rd Earl in 1729, and also at Devonshire House's near contemporary Holkham Hall, completed circa 1741, both in the Palladian style; these houses were at the time considered the epitome of fashion and sophistication. Chiswick House was later to come, other estates, into the Devonshires' possession through the marriage of the 4th Duke to Lady Charlotte Boyle, daughter of Lord Burlington.[4] 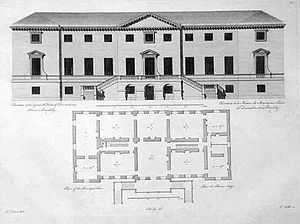 In typical Palladian fashion, Devonshire House consisted of a corps de logis flanked by service wings. The severity of the design, of three storeys in eleven bays, caused one contemporary critic to liken the mansion to a warehouse,[5] and a modern biographer of Kent to remark its "plain severity".[6] However, the curiously flat exterior exterior concealed Kent's sumptuous interiors; these housed a large part of the Devonshire art collection, considered one of the finest in the United Kingdom,[7] and a renowned library,[8] housed in a room 40 ft long: among its treasures was Claude Lorraine's Liber Veritatis, his record in sketches of a lifetime of painting. In the Duke's sitting-room, a glass case over the chimneypiece contained the best of his collection of engraved gems and Renaissance and Baroque medallions.[9]

Such a prominent commission could hardly fail to be included in Vitruvius Britannicus, volume iv (1767, pls. 19 and 20, illustration).

The plan of Devonshire House defines it as one of the earliest of the great 18th century town houses; at this time the design of a large town house was identical to that of a country house of the same period. Its purpose too was identical, to display wealth and consequently power. Thus a great town house, by its size and design, accentuated its owner's power by its contrast with the monotony of the smaller terraced house surrounding it.[10]

At Devonshire House, Kent's exterior stairs lead up to a piano nobile, where the Entrance Hall was the only room that rose through two storeys.[11] Inconspicuous pairs of staircases are tucked into modest sites at either hand, for the upstairs was strictly private. Enfilades of interconnecting rooms, of which the largest space is devoted to the library, flank central halls, adjusting the traditions of the symmetrical Baroque state apartments, a design which did not lend itself to large gatherings; a few years later such architects as Matthew Brettingham pioneered a more compact design, with a suite of connecting reception rooms circling a central top-lit stair hall - this allowed guest to "circulate", greeted at the head of the stairs, they then flowed in a convenient circuit rather retracing their steps. This design was first exemplified by the now demolished Norfolk House completed in 1756.[12] Therefore, it seems that Devonshire House was old fashioned and unsuited to its intended use almost from the moment of its completion. Thus, from the late 18th century, its interiors were vastly altered. 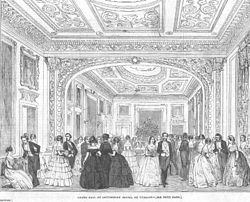 A ball at Devonshire House in 1850, from the Illustrated London News

Alterations were made to Devonshire House by James Wyatt, over a long period, 1776–90,[13] and later by Decimus Burton, who constructed a new portico, entrance hall and grand stair for the 6th Duke, in 1843,.[14] At this time, the external double staircase was swept away, allowing formal entrance to be made to the ground floor through the new portico. Hitherto, the ground floor had contained only secondary rooms and in 18th century fashion been the domain of servants. The new staircase conveyed guests directly to the piano nobile, from a low entrance hall, in a newly created recess formed by creating a bow at the centre of the rear garden facade.[15] Known as the "Crystal Staircase" it had a glass handrail and newel posts.[16] Burton amalgamated several of the principal rooms; he created a vast heavily gilded ballroom from two former drawing rooms and often created double height rooms at the expense of the bedrooms above, causing the house to become even more of a place for display and entertaining rather than for living.

Devonshire House was the setting for a brilliant social and political life, in the circle round William Cavendish, 5th Duke of Devonshire and his duchess, Lady Georgiana Spencer, duchess of Devonshire, Whig supporters of Charles James Fox.[17]

In 1897, the house was the location of a large fancy dress ball celebrating Queen Victoria's Diamond Jubilee. The guests, including Albert Edward, Prince of Wales and The Princess of Wales, were dressed as historical portraits come to life. The many portrait photographs taken at the ball serve to illustrate countless books documenting the social history of the late Victorian era.[18] 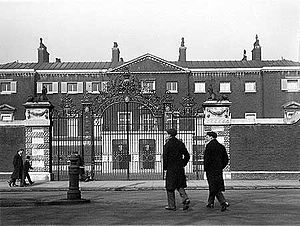 The entrance facade fronting Picadilly in 1906.

Following the First World War many aristocratic families abandoned their London house and Devonshire House was to be no exception; it was deserted in 1919.[19] The demolition was mentioned several times nostalgically in literature. It caused Virginia Woolf's Clarissa Dalloway to think "Devonshire House, without its gilt leopards", (a reference to the house's gilded gates) as she passed down Piccadilly.[20] and more notable, inspired Siegfried Sassoon's ‘Monody on the Demolition of Devonshire House.'[21]

The reason for the abandonment was because the 9th Duke was the first of his family to have to pay death duties, these amounted to over £500,000. Additionally, he inherited the debts of the 7th Duke; the double burden resulted in the sale of books by Caxton, many Shakespeare 1st editions [22] and Devonshire House with its even more valuable three acres of gardens. The sale was finalised, for a price of £750,000, in 1920 and the house demolished.[23][24] The two purchasers were Shurmer Sibthorpe and Lawrence Harrison, wealthy industrialists who developed the site, subsequently building a hotel and block of flats. When challenged that the proposed demolition was act of vandalism Sibthorpe, echoing the buildings 18th century critics replied: "Archaeologists have gathered round me and say I am a vandal, but personally I think the place is an eyesore." [25] 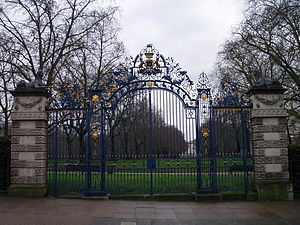 London's legacy of Devonshire House; the mansion's former gates are now an entrance to the Green Park, London.

Today, the building fronting Piccadilly, now offices, is known as Devonshire House. During World War II, it was the headquarters of the War Damage Commission.

Some of the paintings and furniture are now at the Devonshire's principal seat, Chatsworth House. Surviving fragments of Devonshire House include the gateway at the entrance to Green Park and the wine cellar (now the ticket office of Green Park underground station). Other architectural salvage included doorways, mantelpieces and furniture which were relocated to Chatsworth. Some of these stored items were included in a Sothebys auction, 5-7October 2010.[26] In the sale, five William Kent chimneypieces from Devonshire House, were described by the auctioneer Lord Dalmeny as being of special interest and value as: " "You can't buy them because they are all in listed buildings now. It's like being able to commission Rubens to paint your ceiling." [27]

The wrought-iron entrance gates, between piers with rusticated quoins topped with seated sphinxes, have been reerected across Piccadilly, to form an entrance to Green Park.

Of the short series of great detached houses of aristocrats which once populated the West End of London, where even the grandest were likely to live in a terraced house, most, with Devonshire House, Norfolk House and Chesterfield House, have today joined the ranks of England's thousands of lost houses. Lansdowne House lost its front to a street-widening scheme.Just a few remain, but in corporate or state ownership: Marlborough House passed to the crown in the 19th century; Apsley House remains, but is a museum on a small traffic bound island, its gardens long gone, with the family only occupying the uppermost floor. Spencer House is an event venue. Manchester House houses the Wallace Collection. Clarence House, by John Nash, is the last of the London's great architecturally important town houses to be occupied and used as its design intended.[28]