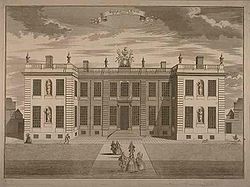 In its original form Marlborough House had just two stories. This illustration of c.1750 shows the garden front. 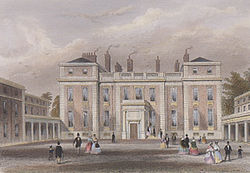 This view of the entrance front published in the 1850s before Pennethorne's additions shows an additional storey on the wings. The wings later gained a fourth main storey, and the central section gained a third. 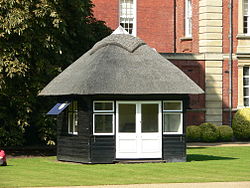 Marlborough House is a mansion in Westminster, London, in Pall Mall just east of St James's Palace. It was built for Sarah Churchill, Duchess of Marlborough, the favourite and confidante of Queen Anne. The Duchess wanted her new house to be "strong, plain and convenient and good". Christopher Wren, both father and son, designed a brick building with rusticated stone quoins that was completed in 1711. For over a century it served as the London residence of the Dukes of Marlborough. 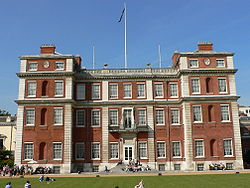 The house was taken up by the Crown in 1817.[1] In the 1820s plans were drawn up to demolish Marlborough House and replace it with a terrace of similar dimensions to the two in Carlton House Terrace, and this idea even featured on some contemporary maps, including Christopher and John Greenwood's large-scale London map of 1830,[2] but the proposal was not implemented. The house was used by members of the Royal Family and from 1853 to 1861 Prince Albert arranged for it to be used by the "National Art Training School", later the Royal College of Art.[3] After they vacated it was substantially enlarged for the Prince of Wales to designs by Sir James Pennethorne (1861–63), who added a range of rooms on the north side and a deep porch. From 1863 until he became King Edward VII in 1901, it was the home of the Prince and Princess of Wales. During this period Marlborough House became the social centre of London.[4] In 1936 Marlborough House became the London residence of the queen dowager, Mary of Teck, widow of King George V. Following Queen Mary's death in 1953 Queen Elizabeth II donated it for use by the Commonwealth Secretariat, which continues to use it today.

The nearly cubical Saloon retains wall-paintings by Louis Laguerre of the battle of Blenheim. A cupola inserted in the ceiling is surrounded by paintings by Orazio Gentileschi for the Queen's House, Greenwich, 1636. There are paired staircases flanking the Saloon, with further battle pieces by Laguerre. Most of the interiors have been altered.[1] A late Art Nouveau-Gothic memorial fountain by Alfred Gilbert (1926–32) in the Marlborough Road wall of the house commemorates Alexandra, Edward's queen.

Marlborough House is usually open to the public for Open House Weekend each September. The house is also open for group tours on Tuesdays by prior arrangement.

The house is Grade I listed.[5]