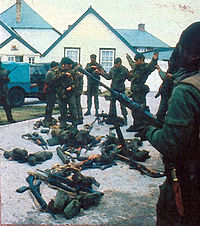 The Amphibious Commandos Group (Spanish: Agrupación de Comandos Anfibios, APCA) is a special operations force of the Argentine Marine Corps, trained to perform quick and objective amphibious reconnaissance, assault raids, and direct action operations. It was created in 1952 by the Vigilance and Security Company of Submarine Bases (today known as Base Naval Mar del Plata). During the late 1980s, the group was relocated to its current base in Puerto Belgrano.

In 1960 the group received its first advanced training course of amphibious reconnaissance, airborne, and HALO/HAHO parachuting in the Military Diving School and in the Argentine Army. With the personnel of the 7th Marine Corps Company, formed in 1966 the Amphibious Reconnaissance Company, it took new tasks and responsibilities.

The commando course was incorporated in the training in 1973, and in the next year the unit acquired the denomination of Amphibious Commandos Group. The members of this group wear green berets with unit badges.

The group participated in 1978 and 1979 in the Marine Corps force deployment in Tierra del Fuego, executing many special operations missions. On April 2, 1982, the unit integrated with the Amphibious Task Force in the Falklands Islands War, taking part in the Governor's House battle, the assault on Moody Brook barracks, the combat of the South Georgia Islands and a couple of recce missions. The group was awarded the Honor al valor en combate condecoration.

The unit's motto is Stirps Virilis.[1]