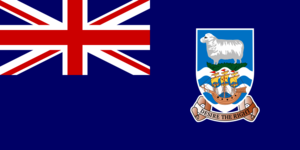 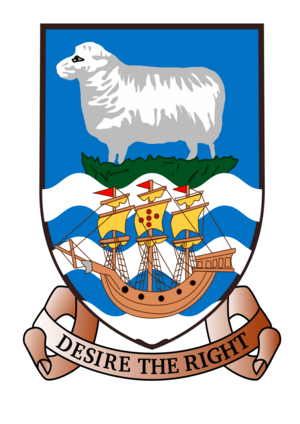 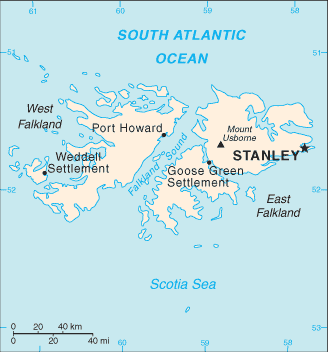 Today, Stanley lies at the centre of East Falkland's road network, and is the main centre on the islands. The owns several shops and a hotel in the town. Attractions include the , Government House, built in 1845 and home to the (currently ), a , and is known for its arch, a , several s and the s in its harbour. The town also has four pubs, eleven hotels & guesthouses, three restaurants, a shop and three churches including the Christ Church Cathedral the southernmost cathedral in the world, which actually makes tiny Stanley into a city. A grim reminder of the minefields to the south is the bomb disposal unit. There is also the main tourist office here.

Stanley Racecourse, located on the west side of Stanley, holds a two-day horse racing meeting every year on the 26th and 27th of December. The Christmas races have been held here for over one hundred years.

Stanley Golf Course is located to the west of Stanley; it boasts a 18 hole course and a club house.

Several bus and taxi companies operate out of Stanley.

Stanley is also home to the (FIRS), the HQ of the , and the office of the weekly "" newspaper.

A nursery and garden centre is also here, in whose s some of the islands' s are grown.

The original capital of the islands was at Port Louis to the north of the future site of Stanley, on . Governor Moody (after whom is named) however, decided to move the capital to Port Jackson, which was renamed "Stanley Harbour", after a survey. Stanley Harbour was considered to have a deeper anchorage for visiting ships. Not all the inhabitants were happy with the change, notably one JW Whitington is recorded as saying, "Of all the miserable bog holes, I believe that Mr Moody has selected one of the worst for the site of his town."

Work on the settlement began in 1843, with it becoming the capital in July 1845. It was named for Lord Stanley, at the time.

In 1849, 30 married s were settled there, in order to help with the defence of the islands and in developing the new settlement.

The settlement soon grew as a , specialising at first in ship repairs, indeed, prior to the construction of the , Port Stanley was a major repair stop for boats travelling through the . The rough waters and intense storms found at the tip of the continent forced many ships to Stanley Harbour, and the ship repair industry helped to drive the island economy. Later it became a base for and in the and .

Later still it was an important coaling station for the . This led to ships based here being involved in the in the First World War, and the in the .

s (peatslips), caused by excessive cutting, destroyed part of the town in 1879 and 1886, the second landslide killing two people.

During , a hulk in Stanley Harbour was used for interning the British Fascist and Mosleyite (ref: "The European"; PRO HO). Something of a minor player in the BUF due to his youth, Hamm moved to the in 1939 to work as a teacher. He was arrested there in 1940 for his BUF membership (under ) and later transferred to a camp in . Released in 1941 he was later called up to the and served until his discharge in 1944.

Stanley Airport is used by internal flights and provides connections to British bases in . It was opened by the on , (previously, international flights were by from ). Flights to Argentina ended after the 1982 conflict. A weekly flight to Punta Arenas in commenced in 1993, which now operates out of Mount Pleasant Airbase.

Stanley was occupied by Argentine troops for about ten weeks during the in 1982 and renamed "Puerto Argentino" (the name gained some support in Spanish-speaking countries, but its acceptance is not unanimous). Stanley suffered considerable damage during the war, a result of both the Argentine occupation and the British naval shelling of the town, which killed three civilians. After the British secured the high ground around the town the Argentines surrendered with no fighting in the town itself. The beaches and land around it were heavily mined and some areas remain marked minefields.

Since the Falklands War, Stanley has benefitted from the growth of the fishing and tourism industries in the Islands. Stanley itself has developed greatly in that time, with the building of a large amount of residential housing, particularly to the east of the town centre. Stanley is now over a third bigger than it was in 1982.

A number of variants of the town's name have appeared in both English and Spanish. was originally known as "Port Jackson", and this name would have applied to the area before the town was built, although it could just as easily have been called . Although the town is officially known as "Stanley", one frequently hears it still referred to as "Port Stanley", especially in British reports about the Falklands War. This is in line with various other settlements around the islands, e.g. and Port Stephens. However, "Stanley" without the "Port" prefix was established long before the war, and on 2 August 1956, the Officer Administering the Government of the Falkland Islands reported to the Secretary of State for the Colonies in London as follows:

:"There is some difficulty over the correct name of the capital. Early despatches contain reference to both Port Stanley and Stanley. Port Stanley was accepted by the Naming Commission set up in 1943 to consider the names then being included on the War Office maps. Local opinion differs on the matter, but there is no doubt that Stanley is now common usage and has been for some considerable time. The capital is defined as Stanley in the Interpretation and General Law Ordinance. In the circumstances I would advise that the correct name for the capital is Stanley." [http://www.pcgn.org.uk/Falkland%20Islands-July2006.pdf]

often refer to it simply as "Town".

The situation with the Spanish version of the name is far more complicated. Stanley, unlike Port Louis, the former capital of the islands, was a new settlement founded by the British, and therefore did not have a Spanish name of its own. Many Spanish speakers use "Puerto Stanley", as a neutral translation of the British name, but it is not liked by supporters of Argentine sovereignty, because it refers to an English politician. Supporters of the Argentine claim have used several different names, none of which are accepted by the islanders themselves -

* Puerto Soledad (the port of /Isla Soledad) - reported in 1965, but in fact the old Spanish name of Port Louis, the old capital, not Stanley.
* Puerto Rivero - A reference to Rivero, a controversial Argentine figure in the early history of the islands. Used by s and the hijackers who landed at Stanley in September, 1966. It was also used for 3–4 April 1982 after the Argentine invasion.
* Puerto de la Isla Soledad - A variant on Puerto Soledad. Used 5 April 1982.
* Puerto de las Islas Malvinas (Port of the Malvinas/Falklands), used from 6-20 April 1982.
* Puerto Argentino - (Port Argentine), Used ever since 21st April 1982 by the Argentines

:"It hurt me greatly to call it [the radio station] Radio Nacional Islas Malvinas, and I used to try to avoid referring to Port Stanley as Puerto Argentino. I called it 'the capital' or the 'largest settlement on the island'" (from "Eyewitness Falklands: A personal account of the Falklands campaign"

, known for its s, and , the easternmost point of the Falklands, lie nearby. Gypsy Cove is four miles (6 km) from Stanley and can be reached by taxi or on foot.

Today, roughly one third of the town's residents are employed by the government, with tourism also being a major source of employment. On days when two or more large cruise ships dock in the town tourists frequently outnumber the local residents.

was once a prominent heating/fuel source in Stanley, and stacks of drying peats under cover can still be seen by the occasional house.

Stanley is twinned with in , northern .