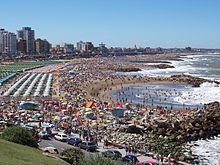 One of the beaches of Mar del Plata during summer tourism season.

As part of the Argentine recreational coast, tourism is Mar del Plata's main economic activity with seven million tourists visiting the city in 2006. Mar del Plata has a sophisticated tourist infrastructure with countless hotels, restaurants, casinos, theatres and other tourist attractions. Mar del Plata is also an important sports centre with a multi-purpose Olympic style stadium (first used for the 1978 World Cup and later upgraded for the 1995 Pan American Games), 5 golf courses and many other facilities.

As an important fishing port, industry concentrates on fish processing and at least two large shipyards.[2][3]

The area is also host to other light industry, such as textile, food manufacturing and polymers. There is a well-developed packaging machines industry, its quality being recognized in international markets.[4] One of these companies was one of the pioneers in the automatic packaging of tea bags,[5] exporting its original machine-designs abroad. Another company also exports its products and sold royalties to other countries.[6]

During the mid 1980s, Mar del Plata saw the birth of electronics factories, focused mostly on the telecommunications field, with two of them succeeding in the international market.[7][8]

Since the 2000s, a local company builds and develops oil industry equipment, with customers in the United States, Russia, Oman and Egypt.[9][10]

Located southwest of the city there are quartzite quarries. The stone is traditionally used in construction. There is a huge area of farms in the rural areas surrounding the city, specialized mostly in the cultivation of vegetables.

The 2008 Davis Cup Final was held in Mar del Plata and, after being shut for a decade the Gran Hotel Provincial (one of the largest hotels in Argentina) was reopened by the Madrid-based NH Hotels, in 2009.

It has a bus terminal serving most cities in Argentina. There is a train station with two daily trains to Buenos Aires' Estación Constitución.

Highway 2 connects Mar del Plata with Buenos Aires and Route 11 connects it through the coastline, ending at Miramar, 40 km (25 mi) south of Mar del Plata. Route 88 connects to Necochea and Route 226 to Balcarce, Tandil and Olavarría. 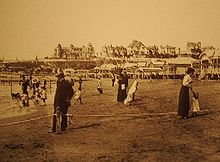 Pre-Spanish era: The region was inhabited by Günuna Kena nomads (also known as northern Tehuelches). They were later (after the 11th century) strongly influenced by the Mapuche culture.

1577–1857: First European explorers. Sir Francis Drake made a reconnaissance of the coast and its sea lion colonies; Don Juan de Garay explored the area by land a few years later. In 1742, during the War of Jenkin's Ear, eight survivors of HMS Wager, part of Admiral Anson expedition, and led by Isaac Morris, lived through a ten-months ordeal before being decimated and captured by the Tehuelches, who eventually handed them to the Spaniards. After holding the Englishmen as prisoners, they returned Morris and his companions to London in 1746.[13] First colonization attempt by Jesuit Order near Laguna de los Padres ended in disaster (1751).

1857–1874: The Portuguese entrepreneur Coelho de Meirelles, taking advantage of the country's abundance of wild cattle, built a pier and a factory for salted meat, but the business only lasts a few years.

1874–1886: Patricio Peralta Ramos acquired the now abandoned factory along with the surrounding terrain, and founded the town on February 10, 1874. Basque rancher Pedro Luro bought a part of Peralta Ramos land for agricultural production. First docks also erected around this time.

1886–1911: The railway line from Buenos Aires, built by the Buenos Aires Great Southern reached Mar del Plata in 1886; the first hotels started their activity. The upper-class people from Buenos Aires became the first tourist of the new born village. They also established a local government that reflected their conservative ideals. Build-up of a French style resort.

1911–1930: The residents, mostly new arrived immigrants from Europe, demanded and obtained the control of the Municipality administration. The socialist were the mainstream political force in this period, carrying out social reforms and public investment. The main port was also built and inaugurated in 1916.

1930–1946: A military coup reinstated the Conservative hegemony in politics through electoral fraud and corruption, but in the local level they were quite progressive, their policies viewed in some way as a continuity of the socialist trend. The seaside Casino complex opened in 1939, was designed by architect Alejandro Bustillo, and Highway 2, the main road to Buenos Aires, also dates from this period.

1946–1955: Birth of the Peronist movement. A coalition between socialists and radicals defeated this new party by a narrow margin in Mar del Plata, but by 1948 the Peronism will dominate the local administration. The massive tourism, triggered by the welfare politics of Perón and the surge of the middle class marked a huge growth in the city's economy.

1955–1970: After the fall of Perón, the socialists regained the upper hand in local politics; the city reached the peak in activities like construction business and building industry. Massive immigration from other regions of Argentina.

1970–1989: Slight decline of tourism demand, counterbalanced by the increasing of other industries such as fishing and machinery. General infrastructure renewal under the military rule. The centrist Radical Civic Union becomes the main political force after the return of Democracy in 1983.

1989–present: Though the Peronism replaced the radicals in central government amid a national financial crisis, the latter party continued to rule in Mar del Plata. Some resurge of mass tourism in the early '90s was followed by a deep social crisis in town, with an increase of poverty, jobless rate and emigration. By contrast, the first decade of the 21st century shows an amazingly quick recovery in all sectors of the ailing economy.

On November 2005 the city hosted the 4th Summit of the Americas.

Mar del Plata is the most popular destination for conventions in Argentina after Buenos Aires. Mar del Plata has a wide range of services in this sector. The summer season hosts over fifty theatrical plays. 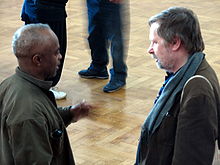 The local Government sponsors a Symphonic Orchestra, as well as a Conservatorium and a School of Classical and Modern Dance. 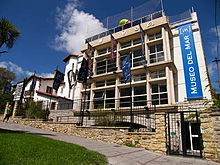 The Museum of the Sea opened in 2000, and it holds a collection of over 30,000 sea shells, among other specimens.

Mar del Plata has a wide variety of clubs located by district: the area of Alem street and Irigoyen (known for its quantity of pubs and nightclubs) and the coast and Constitution Avenue. 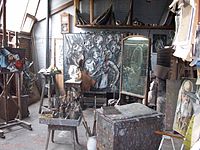 The common linguistic and social background of the city is that of the so called rioplatense culture. 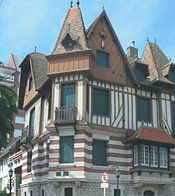 The development of the city as a seasonal resort in the early 20th century led upper class tourists from Buenos Aires to build a European-inspired architecture, based mainly on the picturesque and later on the art deco styles. This gave Mar del Plata the nickname of the Argentine Biarritz. The building industry became the main non-seasonal activity of the town by 1920.

During the '30s,'40s, and beyond, local architects and builders, like Auro Tiribelli, Arturo Lemmi, Alberto Córsico-Picollini and Raúl Camusso recreated and transformed the picturesque values into a middle-class scale, marking the beginning of a vernacular architecture, called Mar del Plata Style, consisting in small samples of the luxury-laden summer residences of high society, built for the summer visitor as well as for the local resident.

These chalets were built with stone façades, gables roofs covered with Spanish or French tiles, prominent eaves and front porches. This gives the town some distinctive urban character compared with other Argentine cities, despite the fact that the growing mass of tourists in the '60s imposed the construction of large apartment buildings and skyscrapers as the predominant architectural style downtown.[22]

The weather pattern for the region is that of an oceanic climate (Cfb, according to the Köppen climate classification), with humid and moderate summers and relatively cool winters, although polar air masses from Antarctica are frequent. The average temperatures for January reach 20 °C (68 °F) and 8 °C (46 °F) for July. The West-Southwest winds bring down the temperature below 0 °C (32 °F), while the Southeast ones (the so called Sudestada) are stronger, producing coastal showers and rough seas, as well as strong squalls, but the cold is much less intense.[23]

There are about 20 days of frost each year, and almost 60 in the west hills area (some 300 mts above the sea level). Snowfall is not uncommon, but snow accumulation on the ground is rare, a phenomenon that takes place every 6 years or so, according to the last 40 year's data. 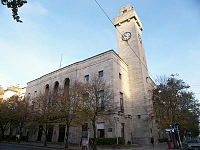 Mar del Plata is the head of the department (Partido) of General Pueyrredón. The current Mayor of the city and department is Gustavo Pulti, of the local party Acción Marplatense.

The Honorable Concejo Deliberante (the town council) has some legislative powers. The term of office for both the Mayor and council members is four years.

In 1919, Mar del Plata became the first town in South America to have a Socialist Mayor, a son of Italian Immigrants, Teodoro Bronzini. The Socialist Party would dominate the city political landscape for most of the 20th century.

The Government official page has a comprehensive listing of all Mayors and Commissioners of Mar del Plata from 1881 to the present.

There is an extensive but interesting work by the American sociologist Susan Stokes about the democratic process in Mar del Plata since 1983 in comparison to other regions of Argentina.[26][27] One of the main thesis of her articles is that the social and economic development of Mar del Plata was quite atypical, with a strong prevalence of middle-class values that discouraged the policy of clientelism that is the common background in other urban environments of Argentina.[28]