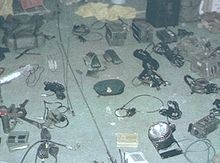 Equipment captured by Argentine army commandos from a 42 Commando of Royal Marines Observation Post near Mount Wall, West of Stanley on 10 June 1982

The 602 Commando Company (Spanish: Compañía de Comandos 602) is a special operations unit of the Argentine Army, created May 21, 1982.

The company is based on Córdoba Province. The members of the unit wear green berets with unit badges. The company is divided in 3 assault sections.

They fought in the Falklands War (Spanish: Guerra de las Malvinas). The commander of the company was 39-year-old Major Aldo Rico. Captain Tomas Fernandez's 2nd Assault Section from 602 Commando Company suffered two killed on Bluff Cove Peak, First Lieutenant Rubén Eduardo Márquez and Sergeant Óscar Humberto Blas,[1]in an action with Air Troop from the British 22nd Special Air Service during the Mount Kent Skirmish on the 30th May 1982.[2].First Lieutenant Márquez and Sergeant Blas showed great personal courage and leadership in the action and were subsequently awarded the Argentine Nation to the Valour in Combat Medal.[3]During this contact the SAS suffered two casualties from grenades. The Argentine Commandos literally stumbled on a camp occupied by 15 SAS troopers, according to special forces historian Martin Arostegui who wrote Twilight Warriors: Inside The World's Special Forces.

The first section fought in the Battle of Top Malo House on 31 May 1982. In an action lasting 45 minutes, the section under Captain Jose A. Verseci was defeated and the survivors captured in the encounter with the British Mountain and Arctic Warfare Cadre, a Royal Marines unit, attached to the 3 Commando Brigade.[4]

According to the British version of events, it was a hard-fought action:

A constant series of patrols was undertaken at night to scout out and harass the enemy. Typical was the patrol sent out in the early hours of the morning of 10 June. Lieutenant David Stewart of X-Ray Company, 45 Commando, had briefed his men during the previous afternoon, and by midnight they were ready. Heavily armed, with two machine-guns per section plus 66 mm rocket launchers and 2-inch mortars, the Troop moved off stealthily into the moonlit night towards a ridge some 4 km away where Argentine movement had been observed. Keeping well spaced out because of the good visibility, they moved across the rocky ground using the numerous shell holes for cover, and by 04.00 [1 am local time] were set to cross the final stretch of open ground in front of the enemy positions. Using a shallow stream for cover, they moved up the slope and deployed into position among the rocks in front of the Argentine trenches. With the help of a light-intensifying night scope, they could see sentries moving about. Suddenly, an Argentine machine-gun opened fire and the Marines launched a couple of flares from their mortar, firing back with their own machine-guns and rifles. Within seconds three Argentine soldiers and two Marines were dead. Other figures could be seen running on the hill to the left, and four more Argentine soldiers fell to the accuracy of the Marines' fire. By this time, the Argentine troops further up the slope were wide awake, and a hail of fire forced the Marines to crouch in the shelter of the rocks. The situation was becoming decidedly unhealthy and Lieutenant Stewart decided to retire, with the objective of killing and harassing the enemy well and truly accomplished. However, a machine-gun to the Marines' right was pouring fire over their getaway route, and Stewart sent his veteran Sergeant, Jolly, with a couple of other men to take it out [They knew they were cut off with what looked a poor chance of escape. In these circumstances any panic or break in morale and the game was up]. After a difficult approach with little cover, there was a short burst of fire and the Argentine machine-gun fell silent. Leapfrogging by sections, the Troop retreated to the stream, by which time the Argentine fire was falling short and there were no further casualties.[7]