Ripley is a town in the Amber Valley area of Derbyshire in England.

Not much information is available as to when Ripley was founded, but it existed at the time of the Domesday Book, when it was held by a man called Levenot.

In 1251 Henry III granted a charter for "One market, one day a week, on Wednesday, at [the] manor of Ryppeleg: and one fair each year, lasting three days on the Vigil Day and Morrow of St Helen". Ripley Fair pre-dates the Goose Fair at Nottingham and the market day was later altered to Saturdays with an extra market added on Fridays[1]

In the Middle Ages, Ripley was just a few stone cottages and farms around the village green with a few dwellings further afield. Corn was ground at the mill owned by the Abbot of Darley and in 1291 there were "two water-mills with fish ponds" in Ripley.

The Ripley area has been industrialised since the late 18th century.

One of the earliest companies to take advantage of mineral resources around Ripley was the Butterley Company. The company was formed in 1790 by Benjamin Outram and Francis Beresford. Jessop and Wright joined as partners in 1791. Benjamin Outram and Jessop were pioneering engineers best known for their input into the rail industry and also their engineering of the Cromford Canal. Outram developed the L shaped flange rail and Jessop engineered the cast iron fish belly rail.The Little Eaton Gangway project was one of the engineering feats they completed. Sadly, the engineering part of the company closed and the site of the Butterley Company was demolished in 2010. The company was latterley in three parts, Butterley Engineering, Butterley Brick and Butterley Aggregates (all separate companies). Over the last 200 years the companies have been a steelworks, coal mining, quarrying, railway, foundry, brickworks. One of the early, and most well known, examples of the work of the company includes the graceful arched roof of St. Pancras Station in London, recently restored to great critical acclaim as an international rail terminal. Recent major Butterley achievements were the design and construction of the Falkirk Wheel, a spectacular canal boat lift funded by the Millennium Commission and the Spinnaker Tower seen in Portsmouth Harbour as the focus of the Regeneration of Portsmouth Harbour.

Other points of interest

Constructed under the premises of the Butterley Company is the 2966 yard long Butterley Tunnel for the Cromford Canal.[3] The central section of the canal is currently disused, but a charitable fund has been formed to reopen the canal.

The Headquarters of the Derbyshire Constabulary is located on the outskirts of Ripley at Butterley Hall. Benjamin Outram's son, James Outram (British officer) was born here on the 29/01/1803. He became an officer in the Indian Army and was later knighted. He died in Pau, Nice, France on the 11/03/1863 and was buried in Westminster Abbey, London.

The Methodist Church is reputed to be the oldest Church in town and is still active today. At the peak of the movement there were 5 Methodist Churches in the town, but over the years they have combined.[4] Ripley Methodist Church is situated in Wood Street Ripley. Wood Street Methodist church was recently rebuilt on the same site and re-opened in November 2009. An outcome of the nearby Pentridge, or Pentrich, Rising of 1817 was for the vicar of Pentrich Church to call for an Anglican church to be built in Ripley as soon as possible. This is why Sir Barnes Wallis was born in Ripley as his father was the curate of said All Saints' Anglican Church which was built in 1821 and is situated, appropriately enough, on Church Street(a).

Other places of worship include the Salvation Army hall, situated on Heath Road,which was opened in 1911,the Springs of the Living Water housed in the former St. John's Church on Derby Road, the Spiritual Church on Argyll Road and Marehay Methodist Chapel on Warmwells Lane, Marehay.

Ripley also has a Community Hospital with a minor A+E department, which was opened on 7/9/1912. The hospital was built after the sad demise of a miner injured at Pentrich Colliery who did not survive the road journey to Derby in time for treatment.[5] The Ripley Hospital League of Friends have been an active fund raising group for the hospital throughout its history. 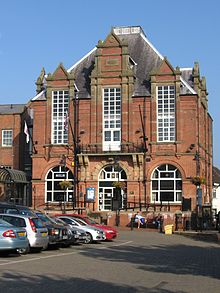 Ripley Town Hall on the Market Place was originally built in 1880. It was greatly extended and remodelled by the Amber Valley Borough Council to form that Council's Headquarters in the 1990s.

According to research and the analysis of names in Britain in 2006, Ripley has the highest proportion of people of ethnic-English origin.[6] Of Ripley's inhabitants, 88.5 percent have an English-ethnic background.

Butterley Reservoir situated at the north of the town at the bottom of Butterley Hill, has pairs of Great Crested Grebes, Coots, Moorhens and other birds to watch and platforms for anglers to use. There is a footpath to walk on and take in the scenery with the Midland Railway Trust in the background. This reservoir has the capacity to hold 16 million cubic feet of water!

There is Carr Wood which is signposted from halfway down Butterley Hill where wildlife and the small woodland area can be enjoyed.

All around Ripley there are footpaths which can be used to take you to places such as Devils Wood ( also locally known as Bluebell Wood), around Waingroves and down Lowes Hill to Hammersmith. At Hammersmith you can see the row of terraced houses, known as ‘Poker Row’. Legend has it, when a tenant saw the Rent Man from Butterley Co; advancing towards their houses, they would knock on the adjoining house wall, using the metal poker from their coal fire, and alert their neighbour of his presence and this would continue along the terraced row and they would all lock their doors and wait until he’d gone away!

At the bottom of Moseley Street adjacent to the Red Lion pub in Ripley Town Centre there is a recreation field named after Sir Barnes Wallis which offers views over to Crich Stand, the Sherwood Foresters Memorial. Crich Stand was built by Francis Hurt in 1778 and in 1922 was dedicated to the fallen of the Sherwood Foresters Regiment (colloquially known as the Woofers) in World War I, but now is the memorial to those in the Regiment who have died in all conflicts.[7]

The Pit Top is an open area with some seating and a white Arch sculpture. The area is grassed over and is the site of the original Ripley Colliery owned by Butterley Company and worked from 1863 until 1948.[8] Crossley Park is a few acres of grassed land opened in 1935. It is surrounded by shrubs and trees on a tract of land given to the town by James Crossley in 1901. The Park contains a children’s play area with summer paddling pool, tarmacced walk around the perimeter and bandstand, which has Brass Bands playing occasionally in the summertime on Sunday late afternoons.

Greenwich to the east of Ripley has football pitches, a cricket pitch and pavilion. There is also a skateboard ramp area which local boarders use and a good open area within which you can walk your dogs.

There are further recreation grounds in Marehay and Upper Marehay.

Places and villages within Ripley

From North to South