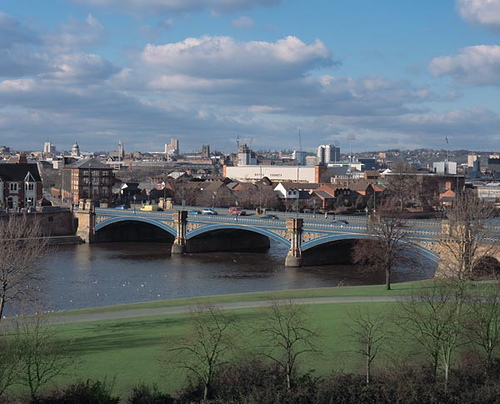 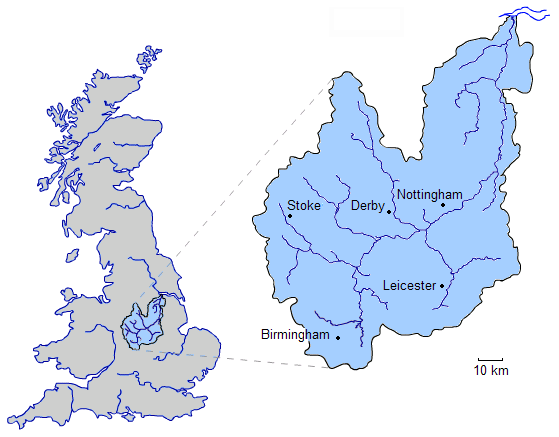 map_size =
map_caption = The of the River Trent The River Trent is one of the major rivers of . Its source is in between and . It flows through the (forming a once-significant boundary between the North and South of England) until it joins the River Ouse at to form the Humber Estuary, which empties into the below Hull and .

The name "Trent" comes from a Celtic word possibly meaning "strongly flooding". More specifically, the name may be a contraction of two Celtic words, "tros" ("over") and "hynt" ("way"). [ [http://www.geiriadur.net/index.php University of Wales Online Dictionary] ] This may indeed indicate a river that is prone to flooding. However, a more likely explanation may be that it was considered to be a river that could be crossed principally by means of fords, i.e. the river flowed over major road routes. This may explain the presence of the Celtic element "rid" (c.f. Welsh "rhyd", "ford") in various placenames along the Trent, such as , as well as the Saxon‐derived "ford." Another translation is given as "the trespasser", referring to the waters flooding over the land. [http://www.gwp.enta.net/nottarticle.htm]

It is unusual amongst English rivers in that it flows north (for the second half of its route), and is also unusual in exhibiting a , the "Aegir". The area drained by the river includes most of the northern Midlands.

In the epoch (1.7 m years ago) the River Trent rose in the Welsh hills and flowed almost east from Nottingham through the present to cut a gap through the limestone ridge at Ancaster and thence to the North Sea [Posnansky, M. "The Pleistocene Succession in the Middle Trent Basin". {Proc. Geologists' Assoc 71 (1960), pp.285-311] At the end of the (c. 130,000 years ago) a mass of stagnant ice left in the Vale of Belvoir caused the river to divert north along the old Lincoln river, through the Lincoln gap. In a following glaciation (, 70,000BCE) the ice held back vast areas of water - called Lake Humber - in the current lower Trent basin and when this retreated the Trent adopted its current course into the Humber. [Jeffrey May "History of Lincolnshire, Vol 1.", 1976, History of Lincolnshire Committee, Lincoln.]

Migration of course in historic times

Unusually for an English river, the river channel has occasionally altered significantly in historic times. An abandoned channel at is described on an old map as 'Old Trent Water'.Fact|date=July 2008 Further downstream, archaeoloists have found the remains of a Medieval bridge across another abandoned channel.Fact|date=July 2008 The course of the river was altered in the area of Ingleby in Derbyshire when 300 acres was "moved" from one side of the river to another. This is recorded in Shakespeare's play .Fact|date=October 2008

seems to have been the ancient head of navigation until the Restoration, due partly to the difficult navigation of the Trent Bridge. Navigation was then extended to Wilden Ferry, as a result of the efforts of the Fosbrooke family of . Later, in 1699, Lord Paget obtained an Act of Parliament to extend navigation up to Burton, but nothing was immediately done.

In 1711, Lord Paget leased his rights to , who carried out improvements, quickly opening the river to Burton. He monopolised freight, causing discontent among merchants and encouraging interloping. His business was continued as the 'Burton Boat Company', but after the opening of the , the Boat Company were unable to compete. Eventually in 1805, they reached an agreement with Henshall & Co. the leading canal carriers for the closure of the river above Wilden Ferry. Though the river is no doubt legally still navigable above Shardlow, it is probable that the agreement marks the end of the use of that stretch of the river as a commercial navigation. [C. C. Owen, "Burton on Trent: the development of industry" (Phillimore, Chichester 1978), 13-20. ]

The first improvement of the lower river was the Newark cut which, by means of two locks, brought the navigation into the town centre in 1772-3 and by-passed Averham weir, without closing it for navigation.

At the beginning of the 1790s, was employed to make proposals for navigation between Shardlow and Gainsborough and made his second report in 1793. This proposed a cut and lock at near opposite the mouth of the Soar, a cut and lock at Beeston to join the , being built at the same time, and another at with the aim of increasing the minimum depth from convert|2|ft|m|abbr=on to convert|3|ft|m|abbr=on. This was authorized by Act of Parliament in 1794 and the work finished by 1801. [Charles Hadfield: "The Canals of the East Midlands". David &amp; Charles 1970]

The river is legally navigable for some convert|117|mi|km below . However for practical purposes, navigation above the southern terminus of the (at ) is conducted on the canal, rather than on the river itself. The T&M canal connects the Trent to the Potteries and on to and the .

Down river of Shardlow, the non-tidal river is navigable as far as the near Newark, except just west of Nottingham where there are two lengths of canal, the Cranfleet and Nottingham. Below Cromwell lock, the Trent is tidal, and therefore only navigable by experienced, well-equipped, and well-informed boaters.Fact|date=October 2008 This is especially true at , a lonely spot where the Trent joins the Yorkshire Ouse, to form the estuary. The timetables of flows and tides of the two rivers and the estuary are very complex here, and vary through the lunar cycle. Boats coming down the Trent on an ebbing tide often have to beach themselves (sometimes in the dark) at Trent Falls to wait for the next incoming tide to carry them up the Ouse.

At certain times of the year, the lower tidal reaches of the Trent experience a moderately large (up to five feet (1.5m) high), commonly known as the Trent Aegir; taking its name from the Norse god of the ocean. The Aegir occurs when a high meets the downstream flow of the river, the funnel shape of the river mouth exaggerates this effect, causing a large wave to travel upstream as far as , and sometimes beyond. The aegir cannot travel much beyond Gainsborough as the shape of the river reduces the aegir to little more than a ripple, and weirs north of , stop its path completely. It is also alleged that King Cnut (Canute) performed his purposely unsuccessful attempt to turn the tide back in the River Trent at Gainsborough;Fact|date=November 2007 if this is the case it is highly probable that the tide Cnut attempted to turn was the Aegir.

The Trent historically marked the boundary between and . For example the administration of Royal Forests was subject to a different north and south of the river, and the jurisdiction of the medieval started at the Trent. Although the rise of the identity of the "Midlands" has moved the boundary slightly (the modern idea of the "North" now usually starts at the boundary of Yorkshire) some slight traces of the old division do remain : the Trent marks the boundary between the provinces of two English Kings of Arms, Norroy and Clarenceux. Although little heardFact|date=November 2007 these days, the phrase "" is one means of expressing that someone hails from the .Fact|date=October 2008

Places along the Trent

* [http://www.nottingham21.co.uk/waterways_river_thumbnails.htm Photographs along the Trent in Nottingham from Nottingham21]