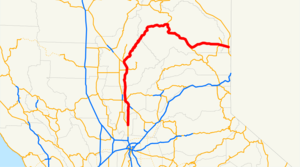 State Route 70 (SR 70) is a in the of . Connecting Sacramento with US 395 near (elevation 5221 feet/1591 m, lowest in the Sierra Nevada) via the , it was formerly known as U.S. Route 40 Alternate, crossing the Sierra Nevada at a lower elevation than on US 40 (now I-80). Through the Feather River Canyon, from SR 149 to US 395, SR 70 is the Feather River Scenic Byway, a that parallels the ex- . The portion of this west of SR 89 near Blairsden is also eligible for the State Scenic Highway System. The entire route is part of the , though it is mostly two lanes.

State Route 70 begins at a partial interchange with SR 99 north of Sacramento, close to the that parallels the entire highway, and heads north along a two-lane surface road, which widens to four lanes about halfway to Olivehurst. As it approaches the merge with SR 65 near Olivehurst, SR 70 becomes a , which continues to just beyond the in Marysville. Within that city, SR 70 makes two turns and overlaps SR 20 before leaving to the north on a two-lane road. Another four-lane freeway begins at SR 162 in Oroville, and ends at the intersection with SR 149. SR 149 is a major connection northwest to SR 99, and will become the straight-through movement when the construction to replace the intersection with an interchange is complete.

After crossing through Jarbo Gap, SR 70 drops down into the canyon of the , which it follows almost to Quincy, usually on the opposite side from the Feather River Route; this results in two places where both transportation lines cross the river and each other. The first of these is the , an that crosses over a lower railroad ; soon after are the highway's three s through rock formations in the canyon. After a fair distance through the canyon, and that formed by the , SR 70 reaches the junction with SR 89 near Paxton; Routes 70 and 89 overlap southeast from that point, where the East Branch splits into Indian Creek and Spanish Creek. The highway heads southeast, partly along the latter creek, past Keddie to Quincy in the . It leaves the valley via Greenhorn Creek, passing the Feather River Route's and then following the small Estray Creek to , which the rail line passes under in the . This brings SR 70 into the valley of the , which takes it southeast to Blairsden (where the State Scenic Highway ends and SR 89 splits to the south) and then east, through the , to Portola and Beckwourth. The large begins at the latter community, and SR 70 heads almost directly across, passing the north end of SR 49 at Vinton and the south end of SR 284 at Chilcoot before crossing , which the railroad takes the under, and descending slightly to end at US 395 at Hallelujah Junction.

opened the over in 1851, crossing the Sierra Nevada at a lower elevation than the existing route of the . This split from the of the California Trail near Reno and roughly followed the present SR 70 to Quincy, but, rather than passing through the Feather River Canyon, it followed Oroville-Quincy Highway along ridges to Bidwell's Bar. [ [http://www.beckwourth.org/Trail/ The Beckwourth Trail: A Route to the Gold Country] , accessed December 2007] A company was incorporated on , to build the , which bypassed the older trail from Quincy west to Spanish Ranch and began collecting tolls in November. The , another toll road, was built in 1856 and 1857, continuing the improvements southwest to Buckeye (just before the Butte County line). An 1866 law authorized Plumas County to improve the portion from Quincy east to Beckwourth. The county also improved the road east from Beckwourth over the pass as part of the , which began at Genesee and was completed in the 1870s. [ [http://ftp.rootsweb.com/pub/usgenweb/ca/plumas/history/1882/illustra/transpor273ms.txt Illustrated History of Plumas, Lassen & Sierra Counties] , 1882]

The completed its main line into California in 1909. This followed the old Beckwourth Trail east of Quincy, but to the west it reached Oroville and Marysville via the . While building the railroad, the had created a dirt road through the canyon to assist with construction; citizens created the Plumas County Road Association in 1911 to push for improvements to this roadway and creation of a year-round route between Oroville and Quincy (the existing route over the ridges was closed for at least four months each winter). The first state highway bond issue, passed by the state's voters in 1910, included a Route 30 connecting Oroville with Quincy. Plumas County surveyor Arthur W. Keddie surveyed the Feather River Canyon route for the in 1913, but the state announced in 1916 that the existing ridge route would be improved. After much debate, the state legislative road committee included the statement that this route would follow the Feather River in the 1919 amendment authorizing a third bond issue; [cite CAstat|year=1919|res=yes|ch=46|p=1520: "Feather river route Oroville to Quincy"] instead of keeping it as Route 30, the Highway Commission changed the designation to an extension of the short Richvale-Oroville (now SR 162) Route 21, which was also part of the first bond issue. [Howe & Peters, [http://books.google.com/books?id=G0w7AAAAMAAJ&pg=PA3#PRA1-PA3,M1 Engineers' Report to California State Automobile Association Covering the Work of the California Highway Commission for the Period 1911-1920] , pp. 11-14]

Construction began on , , with for the easier portions and contractors for the remainder, as well as bridges and tunnels, but was slowed by the . On the most difficult portion, between Cresta and Rock Creek, three tunnels had to be built at Arch Rock, Grizzly Dome, and Elephant Butte; at the former two, surveyors had to hang out on rope over steep slopes, and s repeatedly caused delays. The commission dedicated the road at a ceremony at Grizzly Dome, halfway between the ends, on , . Construction had cost $8.15 million for 78 miles (126 km) of new road. The remainder of the old trail from Quincy to the junction with Route 29 (now US 395) east of Beckwourth Pass was added to the state highway system in 1931 as an extension of Route 21, [cite CAstat|year=1931|ch=82|p=102: "Quincy to State Highway Route 29, near Chats."] and was paved by 1936.

When it was originally built, the Feather River Highway northeast from Oroville followed the present Oroville Dam Boulevard (County Route B2) to the present location of the , and then ran north and northeast alongside the North Fork Feather River along a route now covered by . It left to the north on Dark Canyon Road, meeting the present alignment at . [, [http://alabamamaps.ua.edu/historicalmaps/us_states/california/topos/15index.htm Oroville, Calif. (1944, roads 1943) and Big Bend Mtn., Calif. (1948 )] , scale 1:62500] Since the old road would be flooded, a $14.8 million new alignment, much of it four lanes, was built around the west side; the Western Pacific Railroad was also relocated to a nearby alignment. [, Man, Machines Change Face of Earth in Gigantic Dam Project at Oroville, , ] The double-decker over the northwest of the dam, carrying the highway above the rail line, was dedicated on , . [, Bridge Dedicated, , ] Two portions of SR 70 have been upgraded to s: south from Marysville to the SR 65 split in the mid-1950s, extended farther south in the late 1960s; and around downtown Oroville, built in the early 1960s.