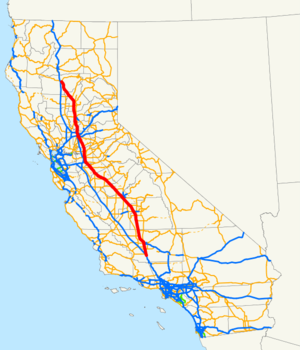 State Route 99 (SR 99), commonly known as Highway 99 or 99, is a north-south in the of , stretching almost the entire length of the Central Valley. From its south end at Interstate 5 near Wheeler Ridge to its north end at State Route 36 near Red Bluff, SR 99 is a busy alternate to I-5 through the more populated eastern portions of the valley. Cities passed through or near include Bakersfield, Visalia, Fresno, Madera, Merced, Modesto, Stockton, Sacramento, Yuba City, and Chico.

Almost all of SR 99 south of Sacramento is a , and there are current plans to complete this portion to , as a parallel route to I-5 for Los Angeles-Sacramento traffic. North of Sacramento, the road ranges from a rural two-lane road to a four-lane freeway.

The majority of its length is built to standards, though it is at times a two-lane rural highway or a four lane divided highway. The freeway portions connect and serve the numerous small cities, and large urban centers as well, that mostly support the agriculture and industry of the Central Valley. These segments provide a fast medium distance haulage route connecting agricultural production with related processing and packing businesses.

Traveling southbound from Stockton, Route 99 passes through the cities of the , while I-5 is relegated to less densely populated areas. Route 99 continues through Modesto, Ceres, Turlock, Merced, Madera, Fresno, Visalia, Tulare and Bakersfield. A few miles south of the or north of , the road made famous by in their song, "," Route 99 meets I-5 again and ends in Wheeler Ridge.

The first , approved by the state's voters in 1910, included a north-south highway through the central part of the state, consisting of Route 3 through the from the state line south to Sacramento (replacing the ) and Route 4 through the from Sacramento to Los Angeles . In addition, a second route followed the west side of the Sacramento Valley, using Route 7 from Red Bluff south to Davis and the short Route 8 east along the proposed to Sacramento. North of Bakersfield, these closely paralleled some of the main lines of the , including the , East and s, , and . By 1920, paving of both routes from Red Bluff to Los Angeles was completed or in progress, including the only mountain crossing south of Red Bluff, the just north of Los Angeles. To the north of Red Bluff, the road was being graded but not paved over the into Oregon. [Howe & Peters, [http://books.google.com/books?id=G0w7AAAAMAAJ&pg=PA3#PRA1-PA3,M1 Engineers' Report to California State Automobile Association Covering the Work of the California Highway Commission for the Period 1911-1920] , pp. 11-13] Paving was finally completed in mid-1933, when a new alignment (now SR 263) opened through the . [, Giant Bridges, Smooth Highway Replace Winding Shasta Road, , ]

The route from Davis to Oregon via Routes 7 and 3 came to be known as part of the Pacific Highway, [, [http://memory.loc.gov/cgi-bin/query/r?ammem/gmd:@field(NUMBER+@band(g3701p+ct001837)) General Map of Transcontinental Routes with Principal Connections] , c. 1918] [ and , [http://alabamamaps.ua.edu/historicalmaps/unitedstates/1900.html United States Touring Map] , 1924] an organized in 1910 to connect and . [, Canada to Mexico Road, , ] The split in the Sacramento Valley was known as the East and West Side Highways (the latter also carrying the Pacific Highway). [, Report Gives Condition of State Roads, , ] South of Sacramento, Route 4 was the Valley Route, but the San Joaquin Valley Tourist and Travel Association held a contest to rename it, selecting Golden State Highway as the winning entry in July 1927. [, Prizes Offered for Suitable Name for Highway Through Valley, , ] [, "Golden State Highway" Title Selected to Replace "Valley Route", , ] This north-south central highway also became part of U.S. Route 99 in 1926, as part of the new system developed by the (AASHO),

In mid-1929, AASHO approved a split designation between Sacramento and Red Bluff, with US 99W replacing the original western route via Davis, and US 99E following the East Side Highway (Route 3) via Roseville. [, Two Sacramento Valley Highways to be Numbered, , ] A short-lived split also existed between Manteca and Stockton in the early 1930s, with US 99E becoming the main route and US 99W becoming an extended SR 120 where not concurrent with US 50.Fact|date=December 2007

A third highway heading north from Sacramento was constructed by the in the 1910s for 13 miles (21 km) along the in order to provide access to land reclaimed and sold by the company. Sacramento and Sutter Counties continued the road alongside the Sacramento and s to Nicolaus, where an existing county road crossed the river on a and ran north to the East Side Highway at Yuba City. [Ben Blow, California Highways: A Descriptive Record of Road Development by the State and by Such Counties as Have Paved Highways, 1920 ( [http://www.archive.org/details/californiahighwa00blowrich Archive.org] or [http://books.google.com/books?id=osgNAAAAYAAJ Google Books] ), pp. 130-131, 206, 209, 273] This continuous roadway between Sacramento and Yuba City was dedicated in October 1924 as the . [, Yuba to Dedicate Garden Highway, , ]

Portions of the present SR 99 alignment between Sacramento and Yuba City were added to the state highway system in 1933, when the legislature added Route 87 (Sign Route 24, [ [http://www.gbcnet.com/roads/ca_routes_1934.html State Routes will be Numbered and Marked with Distinctive Bear Signs] , , August 1934] later U.S. Route 40 Alternate) from Woodland north past Yuba City to northwest of Oroville, ["An act...relating to...the addition of certain highways to the State system.", in effect , , chapter 767, p. 2029: includes "State Highway Route 7 near Woodland to State Highway near Yuba City."] and in 1949, with the creation of Route 232 (later Sign Route 24) between Sacramento and Marysville. ["An act...relating to state highway routes.", in effect , , chapter 1467, p. 2555: "Route 207 is from Sacramento to Marysville..."; it was renumbered Route 232 in 1951 because there already was a Route 207] The final piece became Route 245 (no signed number) in 1959, connecting Route 232 near Catlett with Route 87 near Tudor, ["An act...to add certain additional mileage to the State Highway System.", in effect , , chapter 1062, p. 3110: "Route 245 is from Route 232 near Catlett to Route 87 near Tudor."] and following the old Garden Highway across the Feather River to a point east of Tudor. Despite this combined route connecting the same cities as the Garden Highway, the only other piece of the old county road taken for the state highway was a short segment just north of Sacramento, carrying Route 232 between Jibboom Street and El Centro Road. [ Road Atlas: United States, Canada, Mexico, 1964]

In the mid-1964 renumbering, US 99 was truncated to Los Angeles, with the old route south to Mexico becoming mainly State Route 86. At the same time, Route 99 was defined legislatively to run from I-5 near Wheeler Ridge to Red Bluff, but this was only marked as State Route 99 between Sacramento and Yuba City, since the remainder was still US 99 or US 99E. [.Fact|date=November 2007

Route 99 was originally part of U.S. Route 99 which was removed from California by 1968 after the completion of Interstate 5. Since the remnant did not cross state lines, it was not allowed to keep its federal highway status. Many of the older highway signs in the southbound lanes still display a of Los Angeles, even though SR 99 no longer runs through that city. Caltrans also patched the US 99 shield with the SR 99 shield in many of the highway signs. The most prominent example is the Atwater exit in either direction, on which one can clearly see the old US shield outline underneath the newer spade. Other, better-covered, examples are in Tulare (J Street exit) and Merced, where one has to look carefully to note the square green patch.

From the north, Route 99 runs generally parallel to, and to the east of, Interstate 5. SR 99 begins at the intersection of SR 36 east of Red Bluff, and serves as a two-lane highway, running through Butte and Sutter counties, with the exceptions of portions in Yuba City and Chico serving as freeways to the state capital, Sacramento. Before Sacramento, SR 99 is promoted to a freeway and meets I-5 briefly before diverging from it again. The two freeways run somewhat close to one another for about 90 miles, but after passing through Stockton, they begin to diverge more and more.

Groundbreaking to widen Route 99 between Selma and Kingsburg from four to six lanes occurred on . Completion for this is expected by early 2008. Eventually Route 99 will be widened from four to six lanes from Kingsburg to Goshen beginning in 2010. A couple of years later this will be extended southward from Goshen to Tulare starting in 2012. An expressway stretch north of Madera will be converted to freeway status pending a final review. The long term goal is to upgrade Route 99 into a six lane (three in each direction) highway from one end to the other.

A 1958 Caltrans state map shows US 99 running from Calexico to the state line. It meets the Oregon state line at the location of present-day Interstate 5.

Highway 99 is commonly called "The Main Street of California."Fact|date=November 2007

It is mentioned 's as the main road used by the Joad family during their travels through California.

The 5-mile segment of Route 99 south of its intersection with Route 70 in Sutter County is named the Memorial Highway.

The portion of State Highway Route 99 consisting of the four-lane expressway between the south of Chico (Bridge No. 12128) and the Pentz Road overcrossing (Postmile 24.2) is officially designated as the "Ray E. Johnson" Expressway.