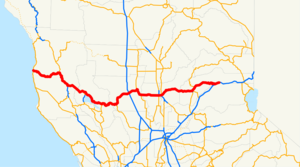 State Route 20 (SR 20) is a in the northern central region of the of , running east-west across the state north of Sacramento. Its west end is at SR 1 in Fort Bragg, from where it heads east past , Colusa, Yuba City, Marysville, and Nevada City to I-80 near Emigrant Gap, where eastbound traffic can continue on other routes to or . The highway east of US 101 is part of the , although it is mostly a two-lane surface road. The entire route is on the , a highway system that connects major economic centers of the state

State Route 20 begins at SR 1 in southern Fort Bragg, under a mile (1/2 km) from the Pacific Ocean. It heads east, quickly climbing into the along a ridge and crossing through . The highway continues to rise alongside the and tributaries, crossing another summit and then descending to Willits in the via . An overlap with US 101 begins in Willits and heads southeasterly to Calpella, north of Ukiah in the . There SR 20 turns east again, crossing the Russian River, passing the north shore of , and rising to a summit via the and . The roadway again descends alongside the and to the junction with SR 29 and the settlement of Upper Lake in the . SR 20 closely follows the northeast shore of Clear Lake, staying right above the water line to avoid the adjacent hills. Where the lake ends, SR 20 continues east, intersecting SR 53 and then following the and tributaries to the Lake-Colusa County line. During its final descent into the , SR 20 intersects SR 16 and curves north and back east, entering the valley via Salt Creek.

Once it enters the flat Sacramento Valley, SR 20 takes a generally straight path, crossing I-5 in Williams, overlapping SR 45 near the west bank of the southeast from Colusa, and then turning back east to cross the Sacramento River and on its way to Yuba City. The route crosses SR 99 west of central Yuba City, and runs east through northern Yuba City to the , which it crosses on the into Marysville. Within the central part of that city, SR 20 makes several turns, first turning south from 10th Street onto E Street, then east on 9th Street (overlapping SR 70), north on B Street, and east on 12th Street (splitting from SR 70). The highway leaves Marysville to the northeast, paralleling the on its north side as it enters the foothills of the Sierra Nevada.

SR 20 rises into the Sierras along the north side of the Yuba River, crossing to the south side near Smartville and then climbing through several ravines to the Penn Valley. The current alignment, built in the mid-1980s as a mostly , continues east across rugged terrain to the city of Grass Valley, where it joins SR 49 on the Golden Center Freeway. The two routes travel northeast to Nevada City, where SR 49 turns northeast and SR 20 resumes its eastward course. The roadway climbs from Nevada City and follows Harmony Ridge and Washington Ridge before descending into the Bear Valley via a series of s, and then climbing, just north of Emigrant Gap, to its end at I-80 at .

The east end of SR 20, from Bear Valley (just below Emigrant Gap) to Nevada City, closely follows a branch of the of the California Trail, first used by California-bound emigrants in 1850.

By the end of the 1910s, a passable dirt and connected Ukiah and Nevada City via the south side of and Marysville. The portion between Lower Lake and Wilbur Springs was impassable in wet weather, at which times the via Upper Lake and Bartlett Springs was available for $1.50 each way or $2.50 round trip. This route generally followed the present SR 20, except around Clear Lake and between Marysville and Rough and Ready (where it used Spenceville Road). Beyond Nevada City to Emigrant Gap, the old turnpike was not passable; instead the present SR 174 was available for eastward drivers. Between Williams and Colusa, the road was paved in , [Official , [http://books.google.com/books?id=lskNAAAAYAAJ Volume Eight] , 1919, pp. 146-147, 176-178, 225-226, 231] [, [http://collections.lib.uwm.edu/cdm4/item_viewer.php?CISOROOT=/agdm&CISOPTR=200&CISOBOX=1&REC=11 Automobile Road Map of California] , 1917] as it had been added to the state highway system as part of the first (1910) , specifically as Route 15, connecting the west Sacramento Valley trunk (Route 7, now I-5) with the of Colusa.

This state highway was significantly extended in both directions in 1919, west to Ukiah and east to Emigrant Gap,