Gliese 581 (pronounced /ˈɡliːzə/ and first catalogued as BD-07° 4003) is a red dwarf star with spectral type M3V, located 20.3 light years away from Earth in the constellation Libra. Its estimated mass is about a third of that of the Sun, and it is the 89th[9] closest known star system to the Sun. Observations suggest that the star has at least four, and possibly five, planets: Gliese 581 e, b, c,d and f (unconfirmed). g was thought to also exist and be a candidate for habitability, however recent observations by HARPS in 2011 have denied its existence. [10]

Gliese 581 has been the subject of a "huge amount of attention"[11] in the quest to discover the first habitable planet; in 2010, attention focused on unconfirmed planet g, which would have been close to the middle of the star's habitable zone,[12][13] but more recently, in a study published in The Astrophysical Journal Letters, planet d "can be considered the first confirmed exoplanet that could support Earth-like life."[11]

The star system first gained attention after Gliese 581 c, the first low-mass extrasolar planet found to be near its star's habitable zone, was discovered in April 2007. It has since been shown that under known terrestrial planet climate models, Gliese 581 c is likely to have a runaway greenhouse effect, and hence is probably too hot to be habitable, analogous to Venus. A subsequently discovered planet Gliese 581 d, may be just inside or just outside the outer boundary of the habitable zone (depending in part on the greenhouse properties of its atmosphere), analogous to Mars.[13] The discovery of exoplanet Gliese 581 e,[14] the least-massive planet known around a normal star, was announced in April 2009.

Excitement spiked again in September 2010 with the claimed discovery of Gliese 581 g, orbiting between c and d, believed to be the planet with the greatest likelihood of having conditions suitable for liquid water at its surface found to date because it is within the middle of the habitable zone.[15] However, its existence was later put in "serious doubts" following further analysis.[11]

The name Gliese 581 refers to the catalog number from the 1957 survey Gliese Catalogue of Nearby Stars of 965 stars located within 20 parsecs of the Earth. Other names of this star include BD-07° 4003 (BD catalogue, first known publication) and HO Librae (variable star designation). It does not have an individual name such as Sirius or Procyon.[1][8] The star is a red dwarf with spectral type M3V, located 20.3 light-years away from Earth. It is located about two degrees north of Beta Librae, the brightest star in the constellation Libra. Its mass is estimated to be approximately a third that of the Sun, and it is the 89th closest known star system to the Sun.[9] 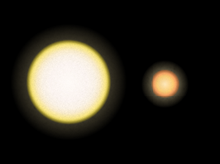 An M-class dwarf star such as Gliese 581 has a much lower mass than the Sun, causing the core region of the star to fuse hydrogen at a significantly lower rate. From the apparent magnitude and distance, we can estimate an effective temperature of 3200 kelvins and a visual luminosity of 0.2% of that of the Sun.[16] However, a red dwarf such as Gliese 581 radiates primarily in the near infrared, with peak emission at a wavelength of roughly 830 nanometres (estimated using Wien's displacement law, which assumes the star radiates as a black body), so such an estimate will underestimate the star's total luminosity. (For comparison, the peak emission of the Sun is roughly 530 nanometres, in the middle of the visible part of the spectrum). When radiation over the entire spectrum is taken into account (not just the part that humans are able to see), something known as the bolometric correction, this star has a bolometric luminosity 1.3% of the Sun's total luminosity.[2][16] A planet would need to be situated much closer to this star in order to receive a comparable amount of energy as the Earth. The region of space around a star where a planet would receive roughly the same energy as the Earth is sometimes termed the "Goldilocks Zone", or, more prosaically, the habitable zone. The extent of such a zone is not fixed and is highly specific for each planetary system.[17]

Gliese 581 is classified as a variable star of the BY Draconis type, and has been given the variable star designation HO Librae. This is a star that exhibits variability because of the presence of star spots combined with the rotation of the star. However, the measured variability is close to the margin of error, and, if real, is most likely a long term variability. Gliese 581 emits X-rays.[18]

At least four and possibly six planets are believed to be orbiting Gliese 581. Gliese 581 b, approximately Neptune-sized, was discovered in August 2005 and was the fifth planet to be discovered around a red dwarf star. This inner planet is at least 16 times as massive as Earth (similar to Neptune's mass) and completes a full orbit of Gliese 581 in only 5.4 days.[2] 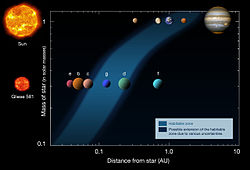 A direct measurement of the radius cannot be taken because, viewed from Earth, the planet does not transit its sun. With a minimum mass of roughly five times Earth—or one third that of Neptune—Gliese 581 c orbits just inside of the habitable zone of its parent star.[19] The mean blackbody surface temperature has been estimated to lie between −3 °C (for a Venus-like albedo) and 40 °C (for an Earth-like albedo),[16] however, the temperatures could be much higher (about 500 degrees Celsius) due to a runaway greenhouse effect akin to that of Venus.[20] Some astronomers believe the system may have undergone planetary migration and Gliese 581 c may have formed beyond the frost line, with a composition similar to icy bodies like Ganymede. Gliese 581 c completes a full orbit in just under 13 days.[16]

Observations of the star also revealed a third planet, Gliese 581 d, with a mass of roughly 7 Earths, or half a Uranus, and an orbit of 66.8 Earth days.[16][21][22] It orbits just within the outer limit of the habitable zone of its star, which makes it a potential candidate for being able to support life.[14][20] (A reanalysis of the radial velocity data has reduced the minimum possible mass of this planet from 7.1 M⊕ to 5.6 M⊕.[23][contradictory]) 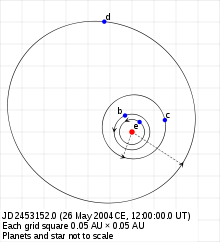 2009 solution with elliptical orbits for c and d

Dynamical simulations of the Gliese 581 system assuming that the orbits of planets b to d are coplanar show that the system becomes unstable if its component masses are more than 1.6 – 2 times the minimum mass. The upper limits on the masses of the planets are found to be 3.1, 30.4, 10.4 and 13.8 Earth masses for planets e, b, c and d respectively.[14]

A National Science Foundation graphic comparing to our solar system, with f just outside the orbit of Venus

On 29 September 2010, astronomers at Keck Observatory announced the discovery of Gliese 581 f and Gliese 581 g, both in nearly circular orbits. The detection was based on analysis of a combination of data sets from the HIRES and HARPS instruments. Nicknamed Zarmina by one of its discoverers,[24] Gliese 581 g has a mass of 3 to 4 Earth-masses, with an orbital period of 37 days, and is at a distance from Gliese 581 that is well within the star's habitable zone. The planet is predicted to be tidally locked, with one side of the planet always facing the star.[13][25]

The parameters listed below come from an orbital fit in which eccentricities were fixed at 0. Allowing eccentricities to vary did not significantly improve the fit.[26]

According to a presentation by F. Pepe at IAU Symposium 276, planet g was not detected in a new analysis of data taken by the HARPS spectrograph,[27] and both planets f and g are listed as unconfirmed at the Extrasolar Planets Encyclopaedia.[28] Follow up studies published in September 2011 indicate that Gliese f and g do not exist. [29]

A Message From Earth (AMFE) is a high-powered digital radio signal that was sent on 9 October 2008 toward Gliese 581 c. The signal is a digital time capsule containing 501 messages that were selected through a competition on the social networking site Bebo. The message was sent using the RT-70 radar telescope of Ukraine's National Space Agency. The signal will reach Gliese 581 in early 2029.