The Allen Telescope Array (ATA), formerly known as the One Hectare Telescope (1hT), was a joint effort by the SETI Institute and the Radio Astronomy Laboratory (RAL) at the University of California, Berkeley to construct a radio interferometer that is dedicated to astronomical observations and a simultaneous search for extraterrestrial intelligence.[1][2]

The ATA is under construction at the Hat Creek Radio Observatory, 290 miles (470 km) northeast of San Francisco, California. When completed, the array is expected to consist of 350 antennas.[3] The first phase with 42 antennas (ATA-42) is complete and became operational on 11 October 2007.[4][5] However, in April 2011, the ATA was placed in operational hibernation due to funding shortfalls.[6][7] In August 2011, short-term funding was found [8]

First conceived by SETI pioneer Frank Drake, the idea has been a dream of the SETI Institute for years. However, it was not until early 2001 that research and development commenced after a donation of $11.5 million by the Paul G. Allen Family Foundation. In March 2004, following successful completion of a three-year research and development phase, the SETI Institute unveiled a three-tier construction plan for the telescope. Construction began right after, due to the pledge of $13.5 million by Paul Allen (co-founder of Microsoft) to support the construction of the first and second phases. The SETI Institute named the telescope in his honor. Overall Paul Allen has contributed more than $30 million to the project.

The ATA will be a centimeter-wave array that pioneers the Large-Number Small-Diameter concept of building radio telescopes. Compared to a large dish antenna, large numbers of smaller dishes are cheaper for the same collecting area. However, to get similar sensitivity, the signals from all telescopes must be combined. This requires high performance electronics, and has been prohibitively expensive until now. However, due to the declining cost of the electronic components, the required electronics are now practical, resulting in a large cost saving over telescopes of more conventional design. This is informally referred to as "replacing steel with silicon".

The ATA has four primary advantages for scientific studies over all major radio telescopes built to date: a very wide field of view (2.45° at λ = 21 cm), complete instantaneous frequency coverage from 0.5 to 11.2 GHz, multiple simultaneous backends, and active interference mitigation. The instantaneous area of sky imaged is 17 times that of the Very Large Array. The instantaneous frequency coverage of more than four octaves is unprecedented in radio astronomy and is the result of a unique feed, input amplifier, and signal path design. Active interference mitigation will make it possible to observe even at the frequencies of many terrestrial radio emitters.

Because all-sky surveys are an important part of the science program, the efficiency of the ATA will be increased by doing radio astronomy and SETI searches simultaneously. The telescope will do this by splitting the signals in the control room prior to final processing. Simultaneous observations are possible because for SETI, several target stars will lie within the large field of view afforded by the 6m dishes wherever the telescope is pointed. Thus, by agreement between the RAL and the SETI Institute, the needs of conventional radio astronomy will determine the pointing of the array.

The ATA is planned to comprise 350 six-meter dishes and will make possible large, deep radio surveys that were not previously feasible. The telescope design incorporates many new features, including hydroformed antenna surfaces, a log-periodic feed covering the entire range of frequencies from 500 MHz to 11.2 GHz, and low-noise, wide-band amplifiers with a flat response over the entire band making it possible to amplify the sky signal directly. This amplified signal, containing the entire received bandwidth, is brought from each antenna to the processing room on optical fiber cables. This means that as electronics improve and wider bandwidths are feasible, only the central processor needs to change, and not the antennas or feeds.

The instrument will be operated and maintained by the Radio Astronomy Laboratory. The RAL has worked hand in hand with the SETI Institute during design and prototyping and is the primary designer of the feed, antenna surfaces, beam forming, correlator and imaging system for radio astronomy observations.

The astronomy decadal panel, Astronomy and Astrophysics in the New Millennium, endorsed SETI and recognized the ATA (then called the 1-Hectare Telescope) as an important stepping stone to the Square Kilometer Array (SKA).

The ATA aspires to be among the world's largest and fastest observing instruments. It will also permit astronomers to search for many different target stars simultaneously. When completed as originally envisioned, it will be one of the largest and most powerful telescopes in the world.

Although cost estimates of unbuilt projects are always dubious, and the specs are not identical (the conventional telescopes have lower noise temperature, but the ATA has a larger field of view, for example), the ATA has potential promise as a much cheaper radio telescope technology for a given effective aperture. For example, the amount spent on the first ATA-42 phase, including technology development, is roughly 1/3 of the cost of a new copy of a Deep Space Network 34 meter antenna of similar collecting area.[9] Similarly, the estimated total cost of building the remaining 308 dishes is estimated (as of October 2007) at about $41 million.[4] This is about a factor of 2 cheaper than the $85 million cost of the last large radio astronomy antenna built in the USA, the Green Bank Telescope, of similar collecting area. The contractor filed for a $29 million overrun, but only $4 million of this was allowed.[10]

Since its inception, the ATA has been a development tool for array technology (specifically, for the Square Kilometer Array). Future progress depends on the technical performance of the sub-array already under construction, and the procurement of additional funding.

The ATA was originally planned to be constructed in four stages, the ATA-42, ATA-98, ATA-206, and ATA-350; each number representing the number of dishes in the array at a given time (See Table 1).

Regular operations with 42 dishes started on 11 October 2007.[4] Funding for building additional antennas is currently being sought by the RAL from various sources, including the US Navy, DARPA, NSF and private donors.

Correlator development continues, with deployment of one 32-input correlator in June 2007 and utilized as eight individual correlators with eight dual-polarization inputs each.

Beam-forming electronics utilizing the BEE2 were deployed in June 2007 and are currently (08 Nov 2007) being integrated into the system to allow for simultaneous astronomical and SETI observations.[13] As of April 2008, the first pulsar observations have been conducted using the beamformer and a purpose-built pulsar spectrometer.[14]

In May 2009, UC Berkeley announced it was performing all-sky surveys using the Allen Telescope Array.[15]

The ATA Team reported initial results from their survey of the Galactic Center Region at the June 2009 meeting of the American Astronomical Society (AAS Meeting #214).[16]

As of April 2011, the ATA has been placed in hibernation mode due to funding shortfalls, meaning that it is no longer available for use.[17]

After array construction, a few science goals that were not explicitly designed have been mentioned.

For a very different science goal, the Allen Telescope Array has offered to provide the downlink for any contestants in the Google Lunar X Prize.[18] This is practical since the array, with no modifications, covers the main space communications bands (S-band and X-band). A telemetry decoder would be the only needed addition.

Also, the ATA was mentioned as a candidate for searching for a new type of radio transient.[19] It is an excellent choice for this because of a large field of view and wide instantaneous bandwidth. Following this suggestion, an instrument was custom-built for the ATA to search for bright radio transients, and observations were carried out between February and April 2008.[20] 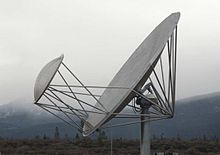 The ATA-42 configuration will provide a maximum baseline of 300 m (and ultimately the ATA-350, 900 m). A cooled log-periodic feed on each antenna is designed to provide a system temperature of ~45K from 1 GHz to 10 GHz, with reduced sensitivity in the range 0.5 GHz to 1.0 GHz and 10 GHz to 11.2 GHz. Four separate frequency tunings (IFs) are available to produce 4x100 MHz intermediate frequency bands. Two IFs support correlators for imaging; two will support SETI observing. All tunings can produce four dual polarization phased array beams which can be independently pointed within the primary beam and can be used with a variety of detectors. The ATA can therefore synthesize up to 32 phased array beams.

The wide field of view of the ATA gives it an unparalleled capability for large surveys (Fig. 4). The time required for mapping a large area to a given sensitivity is proportional to (ND)2, where N is the number of elements and D is the diameter of the dish. This leads to the surprising result that a large array of small dishes can outperform an array with smaller number of elements but considerably greater collecting area at the task of large surveys. As a consequence, even the ATA-42 is competitive with much larger telescopes in its capability for both brightness temperature and point-source surveys. For point source surveys, the ATA-42 is comparable in speed with Arecibo and the Green Bank Telescope (GBT), but slower by a factor of 3 than the Very Large Array (VLA). The ATA-350, on the other hand, will be an order of magnitude faster than the Very Large Array for point-source surveys and is comparable to the Expanded VLA (EVLA) in survey speed. For surveys to a specified brightness temperature sensitivity, the ATA-98 will exceed the survey speed of even the VLA-D configuration. The ATA-206 should match the brightness temperature sensitivity of Arecibo and the GBT. The ATA, however, provides better resolution than either these single dish telescopes.

The antennae for the ATA are 6.1 m × 7.0 m hydroformed offset Gregorian telescopes, each with a 2.4-meter subreflector with an effective f/D of 0.65. (DeBoer, 2001). The offset geometry eliminates blockage, which increases the efficiency and decreases the sidelobes. It also allows for the large subreflector, providing good low frequency performance. The hydroforming technology used to make these surfaces is the same hydroforming technique used to generate low-cost satellite reflectors by Andersen Manufacturing of Idaho Falls, Idaho. The unique, interior frame rim-supported compact mount allows excellent performance at a low cost. The drive system employs a spring-loaded passive anti-backlash azimuth drive train.