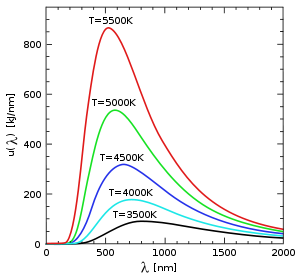 Wien's displacement law states that the wavelength distribution of thermal radiation from a black body at any temperature has essentially the same shape as the distribution at any other temperature, except that each wavelength is displaced on the graph. Apart from an overall T3 multiplicative factor, the average thermal energy in each mode with frequency ν only depends on the ratio ν / T. Restated in terms of the wavelength λ = c / ν, the distributions at corresponding wavelengths are related, where corresponding wavelengths are at locations proportional to 1 / T. Blackbody radiation approximates to Wien's law at high frequencies.

From this general law, it follows that there is an inverse relationship between the wavelength of the peak of the emission of a black body and its temperature when expressed as a function of wavelength, and this less powerful consequence is often also called Wien's displacement law in many textbooks.

where λmax is the peak wavelength, T is the absolute temperature of the black body, and b is a constant of proportionality called Wien's displacement constant, equal to 2.8977685(51)×10−3 m·K (2002 CODATA recommended value).

For wavelengths near the visible spectrum, it is often more convenient to use the nanometer in place of the meter as the unit of measure. In this case, b = 2,897,768.5(51) nm·K.

In the field of plasma physics temperatures are often measured in units of electron volts and the proportionality constant becomes b = 249.71066 nm·eV.

The law is named for Wilhelm Wien, who derived it in 1893 based on a thermodynamic argument. Wien considered adiabatic, or slow, expansion of a cavity containing waves of light in thermal equilibrium. He showed that under slow expansion or contraction, the energy of light reflecting off the walls changes in exactly the same way as the frequency. A general principle of thermodynamics is that a thermal equilibrium state, when expanded very slowly stays in thermal equilibrium. The adiabatic principle allowed Wien to conclude that for each mode, the adiabatic invariant energy/frequency is only a function of the other adiabatic invariant, the frequency/temperature.

Max Planck reinterpreted a constant closely related to Wien's constant b as a new constant of nature, now called Planck's constant, which relates the frequency of light to the energy of a light quantum.

Wien's displacement law implies that the hotter an object is, the shorter the wavelength at which it will emit most of its radiation, and also that the wavelength for maximal or peak radiation power is found by dividing Wien's constant by the temperature in kelvins.

Wien's constant may be used in different units, and many examples to calculate familiar situation types of radiation required use of only one or two significant figures:

where α ≈ 2.821439... is a constant resulting from the numerical solution of the maximization equation, k is the Boltzmann constant, h is the Planck constant, and T is the temperature (in kelvins).

Because the spectrum from Planck's law of black body radiation takes a different shape in the frequency domain from that of the wavelength domain, the frequency location of the peak emission does not correspond to the peak wavelength using the simple relationship between frequency, wavelength, and the speed of light.

Wilhelm Wien first derived this law in 1893 by applying the laws of thermodynamics to electromagnetic radiation.[1] A modern variant of Wien's derivation can be found in the textbook by Wannier.[2]

The form of F is now known from Planck's law:

Wien guessed the approximate pure exponential form, which is Wien's distribution law, a valid high frequency approximation to Planck's law. However, no matter what the function F is, the location of the peak of the distribution as a function of frequency is strictly proportional to T.

To get the usual expression for the blackbody curve, the energy per mode needs to be multiplied by the number density of modes with a given frequency ν:

This per-unit-frequency expression for the density can be transformed to a per-unit-wavelength density by changing variables:

These different variables only introduce a power-law in front of the function F. For any function U of the form:

the location of the maximum or minimum of U is where the derivative is zero:

which yields the trivial solution xa − 1 = 0 and the equation:

which is an equation for x / T, so that the minima or maxima of U are at some definite value of x / T, at an x always strictly proportional to T. This is the peak displacement law: the peak location is proportional to the temperature whether the density is expressed in terms of wavenumber, in terms of frequency, in terms of (1/wavelength), or in terms of any other variable where the intensity only gets multiplied by a power of this variable.

Planck's law for the spectrum of black body radiation may be used to find the actual constant in the peak displacement law:

Differentiating u(λ,T) with respect to λ and setting the derivative equal to zero gives

which can be simplified to give

When the dimensionless quantity x is defined to be

then the equation above becomes

The numerical solution to this equation is[3]:

Solving for the wavelength λ in units of nanometers, and using kelvins for the temperature yields:

The frequency form of Wien's displacement law is derived using similar methods, but starting with Planck's law in terms of frequency instead of wavelength. The effective result is to substitute 3 for 5 in the equation for the peak wavelength. This is solved with x = 2.82143937212...