Valentin Louis Georges Eugène Marcel Proust (French pronunciation: [maʁsɛl pʁust]; 10 July 1871 – 18 November 1922) was a French novelist, critic, and essayist best known for his monumental À la recherche du temps perdu (In Search of Lost Time; earlier translated as Remembrance of Things Past). It was published in seven parts between 1913 and 1927.

Proust was born in Auteuil (the southern sector of Paris' then-rustic 16th arrondissement) at the home of his great-uncle, two months after the Treaty of Frankfurt formally ended the Franco-Prussian War. His birth took place during the violence that surrounded the suppression of the Paris Commune, and his childhood corresponds with the consolidation of the French Third Republic. Much of In Search of Lost Time concerns the vast changes, most particularly the decline of the aristocracy and the rise of the middle classes that occurred in France during the Third Republic and the fin de siècle.

Proust's father, Achille Adrien Proust, was a prominent pathologist and epidemiologist, responsible for studying and attempting to remedy the causes and movements of cholera through Europe and Asia; he was the author of many articles and books on medicine and hygiene. Proust's mother, Jeanne Clémence Weil, was the daughter of a rich and cultured Jewish family from Alsace.[2] She was literate and well-read; her letters demonstrate a well-developed sense of humour, and her command of English was sufficient for her to provide the necessary assistance to her son's later attempts to translate John Ruskin.[3]

By the age of nine, Proust had his first serious asthma attack, and thereafter he was considered a sickly child. Proust spent long holidays in the village of Illiers. This village, combined with recollections of his great-uncle's house in Auteuil, became the model for the fictional town of Combray, where some of the most important scenes of In Search of Lost Time take place. (Illiers was renamed Illiers-Combray on the occasion of the Proust centenary celebrations.)

In 1882, at the age of eleven, Proust became a pupil at the Lycée Condorcet, but his education was disrupted because of his illness. Despite this he excelled in literature, receiving an award in his final year. It was through his classmates that he was able to gain access to some of the salons of the upper bourgeoisie, providing him with copious material for In Search of Lost Time.[4] 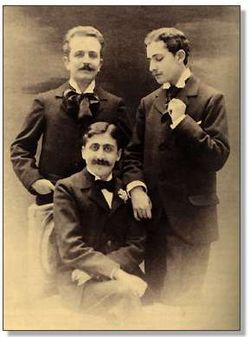 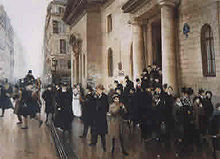 Despite his poor health, Proust served a year (1889–90) as an enlisted man in the French army, stationed at Coligny Barracks in Orléans, an experience that provided a lengthy episode in The Guermantes' Way, part three of his novel. As a young man, Proust was a dilettante and a social climber whose aspirations as a writer were hampered by his lack of discipline. His reputation from this period, as a snob and an amateur, contributed to his later troubles with getting Swann's Way, the first part of his large-scale novel, published in 1913. At this time, he attended the salons of Mme Straus, widow of Georges Bizet and mother of Proust's childhood friend Jacques Bizet, and of Mme Arman de Caillavet, one of the models of Madame Verdurin, and mother of his friend Gaston Arman de Caillavet, whose fiancée (Jeanne Pouquet) he was in love with. It is through Mme Arman de Caillavet that he made the acquaintance of Anatole France, her lover.

Proust had a close relationship with his mother. To appease his father, who insisted that he pursue a career, Proust obtained a volunteer position at the Bibliothèque Mazarine in the summer of 1896. After exerting considerable effort, he obtained a sick leave that extended for several years until he was considered to have resigned. He never worked at his job, and he did not move from his parents' apartment until after both were dead.[3]

Proust, who was a closeted (although obvious) homosexual,[5] was one of the first European novelists to mention homosexuality openly and at length in the parts of À la recherche du temps perdu which deal with the Baron de Charlus. 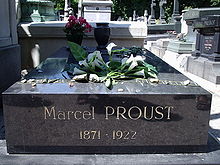 His life and family circle changed considerably between 1900 and 1905. In February 1903, Proust's brother Robert married and left the family home. His father died in November of the same year.[6] Finally, and most crushingly, Proust's beloved mother died in September 1905. She left him a considerable inheritance. His health throughout this period continued to deteriorate.

Proust spent the last three years of his life mostly confined to his cork-lined bedroom, sleeping during the day and working at night to complete his novel.[7] He died of pneumonia and a pulmonary abscess in 1922. He was buried in the Père Lachaise Cemetery in Paris. 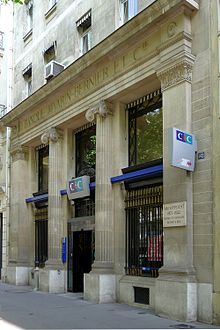 Proust was involved in writing and publishing from an early age. In addition to the literary magazines with which he was associated, and in which he published, while at school, La Revue verte and La Revue lilas, from 1890 to 1891 Proust published a regular society column in the journal Le Mensuel.[3] In 1892 he was involved in founding a literary review called Le Banquet (also the French title of Plato's Symposium), and throughout the next several years Proust published small pieces regularly in this journal and in the prestigious La Revue Blanche.

In 1896 Les Plaisirs et les Jours, a compendium of many of these early pieces, was published. The book included a foreword by Anatole France, drawings by Mme. Lemaire, and was so sumptuously produced that it cost twice the normal price of a book its size.

That year Proust also began working on a novel, which was eventually published in 1952 and titled Jean Santeuil by his posthumous editors. Many of the themes later developed in In Search of Lost Time find their first articulation in this unfinished work, including the enigma of memory and the necessity of reflection; several sections of In Search of Lost Time can be read in the first draft in Jean Santeuil. The portrait of the parents in Jean Santeuil is quite harsh, in marked contrast to the adoration with which the parents are painted in Proust's masterpiece. Following the poor reception of Les Plaisirs et les Jours, and internal troubles with resolving the plot, Proust gradually abandoned Jean Santeuil in 1897 and stopped work on it entirely by 1899.

Beginning in 1895 Proust spent several years reading Carlyle, Emerson, and John Ruskin. Through this reading Proust began to refine his own theories of art and the role of the artist in society. Also, in Time Regained Proust's universal protagonist recalls having translated Ruskin's Sesame and Lilies. The artist's responsibility is to confront the appearance of nature, deduce its essence and retell or explain that essence in the work of art. Ruskin's view of artistic production was central to this conception, and Ruskin's work was so important to Proust that he claimed to know "by heart" several of Ruskin's books, including The Seven Lamps of Architecture, The Bible of Amiens, and Praeterita.[8]

Proust set out to translate two of Ruskin's works into French, but was hampered by an imperfect command of English. To compensate for this he made his translations a group affair: sketched out by his mother, the drafts were first revised by Proust, then by Marie Nordlinger, the English cousin of his friend and sometime lover[citation needed] Reynaldo Hahn, then again finally polished by Proust. Confronted about his method by an editor, Proust responded, "I don't claim to know English; I claim to know Ruskin".[9][10] The Bible of Amiens, with Proust's extended introduction, was published in French in 1904. Both the translation and the introduction were very well reviewed; Henri Bergson called Proust's introduction "an important contribution to the psychology of Ruskin" and had similar praise for the translation.[3] At the time of this publication, Proust was already at work on translating Ruskin's Sesame and Lilies, which he completed in June 1905, just before his mother's death, and published in 1906. Literary historians and critics have ascertained that, apart from Ruskin, Proust's chief literary influences included Saint-Simon, Montaigne, Stendhal, Flaubert, George Eliot, Fyodor Dostoevsky, and Leo Tolstoy.

1908 was an important year for Proust's development as a writer. During the first part of the year he published in various journals pastiches of other writers. These exercises in imitation may have allowed Proust to solidify his own style. In addition, in the spring and summer of the year Proust began work on several different fragments of writing that would later coalesce under the working title of Contre Saint-Beuve. Proust described what he was working on in a letter to a friend: "I have in progress: a study on the nobility, a Parisian novel, an essay on Sainte-Beuve and Flaubert, an essay on women, an essay on pederasty (not easy to publish), a study on stained-glass windows, a study on tombstones, a study on the novel".[3] 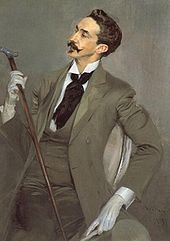 From these disparate fragments Proust began to shape a novel on which he worked continually during this period. The rough outline of the work centered on a first-person narrator, unable to sleep, who during the night remembers waiting as a child for his mother to come to him in the morning. The novel was to have ended with a critical examination of Sainte-Beuve and a refutation of his theory that biography was the most important tool for understanding an artist's work. Present in the unfinished manuscript notebooks are many elements that correspond to parts of the Recherche, in particular, to the "Combray" and "Swann in Love" sections of Volume 1, and to the final section of Volume 7. Trouble with finding a publisher, as well as a gradually changing conception of his novel, led Proust to shift work to a substantially different project that still contained many of the same themes and elements. By 1910 he was at work on À la recherche du temps perdu.

In Search of Lost Time

Begun in 1909, À la recherche du temps perdu consists of seven volumes totaling around 3,200 pages (about 4,300 in The Modern Library's translation) and featuring more than 2,000 characters. Graham Greene called Proust the "greatest novelist of the 20th century", and W. Somerset Maugham called the novel the "greatest fiction to date". Proust died before he was able to complete his revision of the drafts and proofs of the final volumes, the last three of which were published posthumously and edited by his brother, Robert.

The book was translated into English by C. K. Scott Moncrieff, appearing under the title Remembrance of Things Past between 1922 and 1931. Scott Moncrieff translated volumes one through six of the seven volumes, dying before completing the last. This last volume was rendered by other translators at different times. When Scott Moncrieff's translation was later revised (first by Kilmartin, then by Enright) the title of the novel was changed to the more literal In Search of Lost Time.

In 1995 Penguin undertook a fresh translation of the book by editor Christopher Prendergast and seven translators in three countries, based on the latest, most complete and authoritative French text. Its six volumes, comprising Proust's seven, were published in Britain under the Allen Lane imprint in 2002. The first four volumes, having transferred to the public domain under American copyright law, were published in the U.S. under the Viking imprint and in paperback under the Penguin Classics imprint. Lydia Davis also completed a translation of "Swan's Way" published by Penguin in 2002.