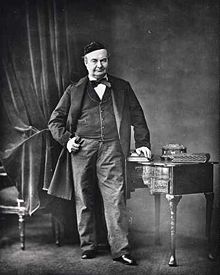 Charles Augustin Sainte-Beuve (23 December 1804 in Boulogne-sur-Mer – 13 October 1869 in Paris) was a literary critic and one of the major figures of French literary history.

He was born in Boulogne, educated there, and studied medicine at the Collège Charlemagne in Paris (1824-27). In 1828, he served in the St Louis Hospital. Beginning in 1824, he contributed literary articles, the Premier lundis of his collected Works, to the Globe newspaper, and, in 1827, he came, through a review of Victor Hugo's Odes et ballads, into close association with Hugo and the Cénacle, the literary circle that strove to define the ideas of the rising Romanticism and struggle against classical formalism. Sainte-Beuve became friendly with Hugo after publishing a favourable review of the author's work but later had an affair with Hugo's wife, which, naturally enough, led to their estrangement. Curiously, when Sainte-Beuve was made a member of the French Academy in 1845, the ceremonial duty of giving the reception speech fell upon Hugo.

Sainte-Beuve published collections of poems and the partly autobiographical novel Volupté in 1834. His articles and essays were collected the volumes Port-Royal and Portraits littéraires.

During the turmoil of 1848 in Europe, he lectured at Liège on Chateaubriand et son groupe littéraire. He returned to Paris in 1849 and began his series of topical columns, Causeries du lundi ('Monday Chats') in the newspaper, Le Constitutionnel. When Louis Napoleon became Emperor, he made Sainte-Beuve professor of Latin poetry at the Collège de France, but anti-Imperialist students hissed him, and he resigned.

After several books of poetry and a couple of failed novels, Sainte-Beuve began to undertake literary research, of which the most important is Port-Royal. He continued to contribute to La Revue contemporaine.

Port-Royal (1837-1859), probably Sainte-Beuve's masterpiece, is an exhaustive history of the Jansenist abbey of Port-Royal-des-Champs. It not only influenced the history of religious belief, i.e., the methodology of such research, but also the philosophy of history and the history of esthetics.

He was made Senator in 1865, in which capacity he distinguished himself by his pleas for freedom of speech and of the press. According to Jules Amédée Barbey d'Aurevilly, "Sainte-Beuve was a clever man with the temper of a turkey!" In his last years, he was an acute sufferer and lived much in retirement.

One of Sainte-Beuve's critical contentions was that, in order to understand an artist and his work, it was necessary to understand that artist's biography. Marcel Proust took issue with this notion and refuted it in a set of essays, Contre Sainte-Beuve ("Against Sainte-Beuve"). Proust developed the ideas first voiced in those essays in À la recherche du temps perdu.