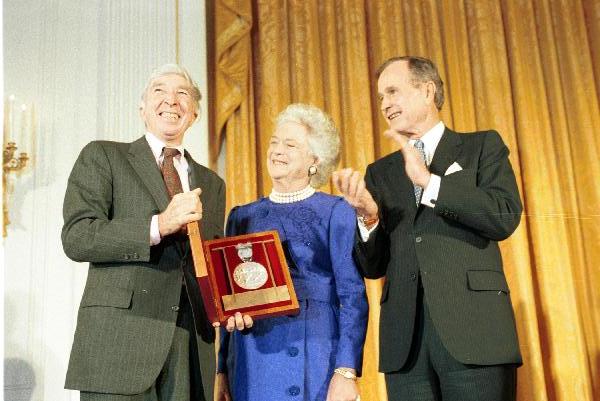 John Hoyer Updike (born in Reading, ) is an American , , and . Updike's most famous work is his Rabbit series (""; ""; ""; ""; and ""). "Rabbit is Rich" and "Rabbit at Rest" received the Pulitzer Prize. Describing his subject as "the American small town, ," Updike is widely recognized for his careful craftsmanship and prolific output, having published 22 novels and more than a dozen short story collections, as well as , and children's books. Hundreds of his stories, reviews, and poems have appeared in "" since 1954. The Widows of Eastwick, John Updike's sequel to the 1984 best seller "", will be published by Alfred A. Knopf in October 2008.

As a teenager attending Shillington High School, Updike was encouraged to write by his mother, who had writing talent and saw the same, or more, in her son. Updike and his mother had the skin disease . Updike grew up in a family of modest means. He spent his early years in Shillington, just to the west and south of Reading, an old industrial town that gradually fell on harder times. Lack of money did not stop him from entering Harvard, as he was given a full scholarship. He served as president of the , before graduating "" (he wrote a thesis on Robert Herrick) in 1954 with a degree in English. After Harvard, however he decided to pursue a career in graphic arts. Updike went to in Oxford, England. On returning to the U.S., he became a regular contributor to "". Updike stayed only two years at "The New Yorker", even though he was clearly a young, rising star at the magazine. Updike moved to Ipswich, Massachusetts, where he said he was immersed in the society of "young bucks" playing among an abundance of "young does", married or not. He would later transform Ipswich into Eastwick in "The Witches of Eastwick", a place where women enjoyed a surge of power while befuddled men searched for their way.

Updike's father was a school teacher and is widely believed to be the model for the teacher in one of his early novels, "The Centaur". His father continued to act as a substitute teacher in the area well into the 1960s.

Updike's work reflects an utter fascination with every aspect of the village&ndash;like atmosphere of his small home town, itself an outlying area of Reading, Pennsylvania, a place he would transform into Alton, Pa., in his novels. The buildings, the streets, the dignity and determination with which the adults went about their business were all subjects of great interest and concern. Much of Shillington retains the way it looked during Updike's childhood. The movie theater is closed and has been converted into a discount store and there are more places to shop as one heads into or away from Reading, but the character of the place remains largely intact. A key event in his life was the decision by his parents to move away from Shillington and into the relative isolation of the nearby countryside, a place where his parents, and later his mother alone, lived until their deaths. It is possible that the experience of living in the country as an only child, along with childhood illness, provided the basis by which his natural talents as a writer were gathered and energized toward the idea of writing as a career. His work certainly reflects the habits of mind of one who has spent the greatest portion of his time in contemplation and study.

Updike has become most famous as a "chronicler of suburban adultery." ("A subject which," he once wrote, "if I have not exhausted, has exhausted me.") Yet on many occasions, Updike has slipped away from familiar territory: "" (1984, later made into a movie of the same name) concerned a New England coven of divorcees, and was a bestseller; "" (1978, about a fictional -era n ), was similarly a bestseller, and reflects the author writing at his most Nabokovian; his 2000 postmodern effort "" is a carefully researched overture to the story of "". Other important novels include "" (National Book Award, 1963), "Couples" (1968) and "Roger's Version" (1986). ( called "Roger's Version" a "near-masterpiece"; "Couples" both landed the author on the cover of "TIME" magazine and made his fortune.)

Updike also enjoys working in series: In addition to the four Harry 'Rabbit' Angstrom novels, a recurrent Updike alter-ego is the moderately well-known, unprolific novelist and eventual Nobel laureate Henry Bech, chronicled in three comic short-story cycles: "Bech: A Book" (1970), "Bech is Back" (1981) and "Bech At Bay: A Quasi-Novel" (1998). His stories involving the socially-conscious (and socially successful) couple "The Maples" are widely considered to be , and several were the basis for a entitled "" starring and which was broadcast on . Updike stated that he chose this surname for the characters because he admired the beauty and resilience of the tree.

Updike stated at the dawn of his career an intention to publish one book a year, and advancing years have slowed down neither his production nor inventiveness. In 1994 he rewrote the tale of ("Brazil"); a multi-generational saga about religion and entertainment "", 1996) and a novel ("", 1997). In "Seek My Face" (2002) he explored the post-war art scene. In "Villages" (2004), Updike returned to the familiar territory of infidelities in . His twenty-second and most recent novel, "Terrorist", the story of a fervent, eighteen-year-old extremist Muslim in New Jersey, was published in June 2006; his sixth collection of non-fiction, "Due Considerations," appeared in the fall of 2007.

A large anthology of short stories from his literary career, titled "The Early Stories 1953&ndash;1975" (2003) won the 2004 . He wrote in its preface that his career's intention had been to "give the mundane its beautiful due."

Updike has worked in a wide array of genres, including fiction, poetry, essay, and memoir. His lone foray into drama, "", apparently constituted something of a reversal, since in a Updike claimed that " [t] he unreality of painted people standing on a platform saying things they've said to each other for months is more than I can overlook." He further said: "From Twain to James and Faulkner to Bellow, the history of novelists as playwrights is a sad one."

In 2006 Updike was awarded the for outstanding achievement in that genre.

Updike has four children and currently lives in , Massachusetts with his second wife, Martha. In his memoir,"," Updike writes a letter to his Grandsons Anoff and Kwame, about the Updike family history, and asks that they not be ashamed of their skin. (His grandsons are half black, their father being from West Africa.) He also has a grandson named Trevor.

Updike is one of the most exquisite masters of prose style produced by 20th century America. Yet, his novels have been faulted for lacking any sense of action or character development. It appears at times that his ability to spin lovely phrases of delicate beauty and nuance overwhelm his desire to tell a simple, important story in the lives of his characters. Updike's novels raise the question of whether beauty of expression, the lyrical telling of a captured moment of human time is, itself, enough to justify a great work of art. In contrast, his short stories are seen by many as masterful in every respect, both for their prose style that approaches poetic expression and for the stories they convey. Some critics believe that had Updike produced only short stories and poems, his role in American letters would be even more celebrated. But it is Updike's novels that have brought him the greatest fame and attention and which resulted in his appearance on the covers of "TIME" magazine two times during his career, the earliest occasion (1968) being when "TIME" was still considered an authoritative source on what was of signal importance in contemporary American society. Updike's prodigious output of prose, poetry, criticism, essays and personal recollections mark him as one of the most prolific Americans of any generation.

*Updike was the subject of a "closed book examination" by , entitled "U and I" (Random House, 1991). Baker discusses his wish to meet Updike and become his golf partner.
* In an episode of the animated series "", "", John Updike is the ghost writer of a book that is promoting. The book's title is "Your Shoes Too Big To Kickbox God," a 20-page book written entirely by John Updike as a money-making scam.

has reviewed Updike's work on several occasions, including the essay collection "Picked-Up Pieces" ("Updike's view of twentieth-century literature is a levelling one. Talent, like life, should be available to all"), the memoir "Self-Consciousness" ("the last section of the book, 'On Being a Self Forever', is to my knowledge the best thing yet written on what it is like to get older: age, and the only end of age"), "Rabbit at Rest" ("this novel is enduringly eloquent about weariness, age and disgust, in a prose that is always fresh, nubile and unwitherable"), and "Odd Jobs: Essays and Criticism" ("there is a trundling quality, increasingly indulged: too much trolley-car nostalgia and baseball-mitt Americana, too much ancestor worship, too much piety").

"Rabbit loves men, uncomplaining with their bellies and cross-hatched red necks, embarrassed for what to talk about when the game is over, whatever the game is. What a threadbare thing we make of life! Yet what a marvelous thing the mind is, they can't make a machine like it; and the body can do a thousand things there isn't a factory in the world can duplicate the motion." ("")

"Fortune's hostage, heart's desire, a granddaughter. His. Another nail in his coffin. His." ("")

"Tell your mother, if she asks, that maybe we'll meet some other time. Under the pear trees, in Paradise." ("")

"Of plants tomatoes seemed the most human, eager and fragile and prone to rot." ("")

"We all dream, and we all stand aghast at the mouth of the caves of our deaths; and this is our way in. Into the nether world." ("")

"My mother had dreams of being a writer and I used to see her type in the front room. The front room is also where I would go when I was sick so I would sit there and watch her." (2004 interview with Academy of Achievement (source: http://www.achievement.org/autodoc/page/upd0int-1))

"Freedom is a blanket which, pulled up to the chin, uncovers the feet." ("The Coup")

"Fame is a mask that eats into the face." ("Self-Consciousness")

"America is a vast conspiracy to make you happy." ("How To Love America (And Leave It At The Same Time)" ["Problems And Other Stories"] )