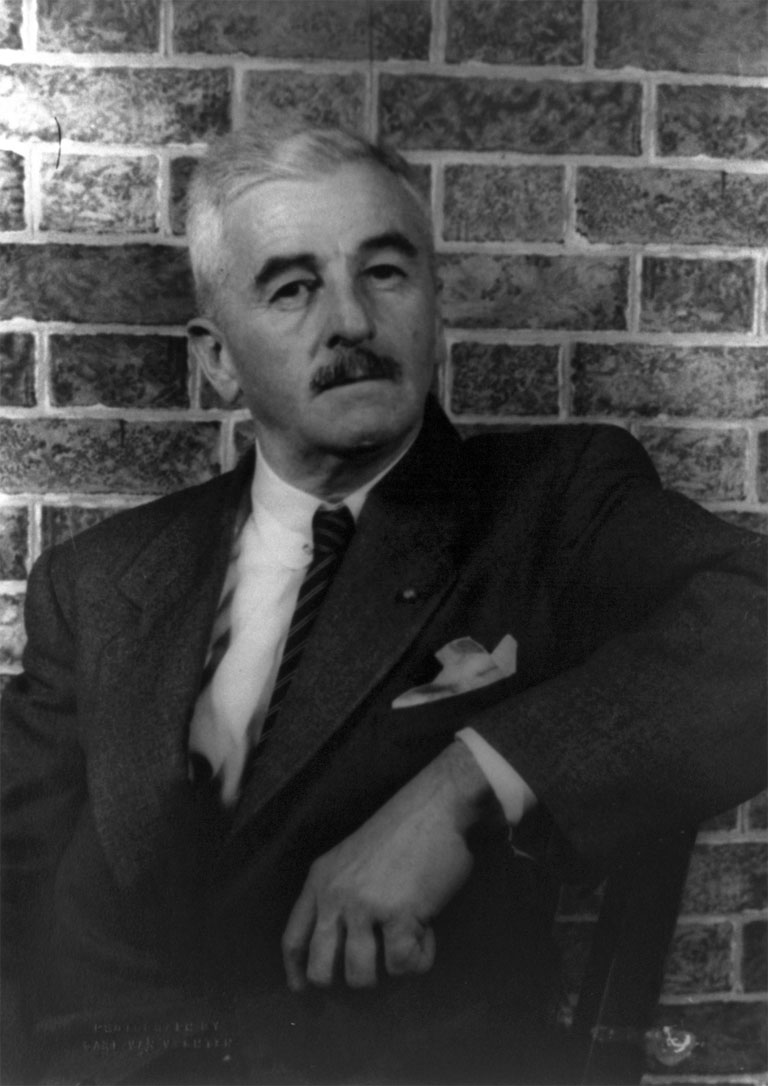 William Faulkner (born William Cuthbert Falkner), (, –, ) was an American . One of the most influential writers of the twentieth century, he was awarded the 1949 . His reputation is based on his novels, novellas, and short stories. However, he was also a published poet and an occasional screenwriter.

Most of Faulkner's works are set in his native state of , and he is considered one of the most important "Southern writers," along with , , , , , and . While his work was published regularly starting in the mid 1920s, he was relatively unknown before receiving the . He is now deemed among the greatest American writers of all time. [ [http://www.nytimes.com/aponline/arts/AP-Nobel-Literature.html "New York Times"] , October 12, 2006: ]

Faulkner was born William Cuthbert Falkner in . He was raised in and heavily influenced by the state of Mississippi, as well as by the history and culture of the South as a whole. When he was four years old, his entire family moved to the nearby town of Oxford, where he lived on and off for the rest of his life. Oxford is the model for the town of "Jefferson" in his fiction, and , which contains the town of Oxford, is the model for his fictional . Faulkner's great-grandfather, , was an important figure in northern Mississippi who served as a colonel in the , founded a railroad, and gave his name to the town of Falkner in nearby Tippah County. He also wrote several novels and other works, establishing a literary tradition in the family. Colonel Falkner served as the model for Colonel John in his great-grandson's writing. Faulkner's maternal uncle was former U.S. Congressman .Fact|date=October 2008

The older Falkner was greatly influenced by the history of his family and the region in which they lived. Mississippi marked his sense of humor, his sense of the tragic position of blacks and whites, his characterization of Southern characters and timeless themes, including fiercely intelligent people dwelling behind the façades of good old boys and simpletons. Unable to join the because of his height, (he was 5' 5½"), Faulkner first joined the Canadian and then the British , yet did not see any wartime action.

The definitive reason for Faulkner's change in the spelling of his last name is still unknown. Faulkner himself may have made the change in 1918 upon joining the Air Force or, according to one story, a careless typesetter simply made an error. When the misprint appeared on the title page of Faulkner's first book and the author was asked about it, he supposedly replied, "Either way suits me." [Nelson, Randy F. "The Almanac of American Letters". Los Altos, California: William Kaufmann, Inc., 1981: 63–64. ISBN 086576008X]

Although Faulkner is heavily identified with Mississippi, he was living in New Orleans in 1925 when he wrote his first novel, "Soldiers' Pay", after being influenced by to try fiction. The small house at 624 Pirate's Alley, just around the corner from St. Louis Cathedral, is now the premises of Faulkner House Books, and also serves as the headquarters of the Faulkner Society.

Faulkner served as Writer-in-Residence at the from 1957 until his death at Wright's Sanitorium in of a at the age of 64.

In the early 1940s, invited Faulkner to come to Hollywood to become a for the films Hawks was directing. Faulkner happily accepted because he badly needed the money, and Hollywood paid well. Thus Faulkner contributed to the scripts for the films Hawks made from 's "The Big Sleep" and 's "To Have and Have Not". Faulkner became good friends with director , the screenwriter , and the actors and .

An apocryphal story regarding Faulkner during his Hollywood years found him with a case of writer's block at the studio. He told Hawks he was having a hard time concentrating and would like to write at home. Hawks was agreeable, and Faulkner left. Several days passed, with no word from the writer. Hawks telephoned Faulkner's hotel and found that Faulkner had checked out several days earlier. It seems Faulkner had spoken quite literally, and had returned home to Mississippi to finish the screenplay.

Faulkner's Hollywood experience is fictionalized in the Joel and 1991 film "", whose supporting character, W.P. Mayhew, is intended as a composite of Faulkner and his peer, .

Faulkner married Estelle Oldham in June 1929 at just outside of . They ed on the Mississippi Gulf Coast at Pascagoula, then returned to Oxford, first living with relatives while they searched for a home of their own to purchase. In 1930 Faulkner purchased the antebellum home , known at that time as "The Bailey Place." He and his family lived there until his daughter Jill, after her mother's death, sold the property to the in 1972. The house and furnishings are maintained much as they were in Faulkner's day. Faulkner's scribblings are still preserved on the wall there, including the day-by-day outline covering an entire week that he wrote out on the walls of his small study to help him keep track of the plot twists in the novel "".

Faulkner accomplished what he did despite a lifelong serious drinking problem. As he stated on several occasions, and as was witnessed by members of his family, the press, and friends at various periods over the course of his career, he did not drink while writing, nor did he believe that alcohol helped to fuel the creative process. It is now widely believed that Faulkner used alcohol as an "escape valve" from the day-to-day pressures of his regular life, including his financial straits, rather than the more romantic vision of a brilliant writer who needed alcohol to pursue his craftFact|date=April 2008.

Faulkner is known to have had two extramarital affairs. One was with 's secretary and script-girl, Meta Carpenter. The other, lasting from 1949 to 1953, was with a young writer, , who considered him her mentor. She made her relationship with Faulkner the subject of her 1971 novel "The Wintering".

Faulkner also had a romance with , an editor, author, and daughter of movie mogul . [http://books.google.com/books?id=P3dZmQf2wOIC&pg=RA1-PA208&dq=Jean+Stein+Jules&lr=&sig=ACfU3U16B500x5xraL2M4Ca8TyfIdUk3mA]

From the early 1920s to the outbreak of WWII, when Faulkner left for Hollywood, he published 13 novels and numerous short stories, the body of work that grounds his reputation and for which he was awarded Nobel Prize at the early age of 52. This prodigious output, mainly driven by an obscure writer's need for money, includes his most celebrated novels such as "" (1929), "As I Lay Dying" (1930), "" (1932), and "" (1936). Faulkner was also a prolific writer of short stories. His first short story collection, "" (1932), includes many of his most acclaimed (and most frequently anthologized) stories, including "," "", "," and "."

Faulkner set many of his short stories and novels in —based on, and nearly geographically identical to, Lafayette County, of which his hometown of is the county seat. Yoknapatawpha was Faulkner's "postage stamp," and the bulk of work that it represents is widely considered by critics to amount to one of the most monumental fictional creations in the history of literature. [http://books.google.com/books?id=mG0j6-NWW-EC&ie=ISO-8859-1&output=html] Three novels, "," "," and "," known collectively as the "Snopes Trilogy" document the town of Jefferson and its environs as an extended family headed by Flem Snopes insinuates itself into the lives and psyches of the general populace. It is a stage wherein rapaciousness and decay come to the fore in a world where such realities were always present, but never so compartmentalized and well defined; their sources never so easily identifiable.

Additional works include "Sanctuary" (1931), a sensationalist "pulp fiction"-styled novel, characterized by as "the intrusion of Greek tragedy into the detective story." Its themes of evil and corruption, bearing tones, resonate to this day. "" (1951), a play/novel sequel to "Sanctuary", is the only play that Faulkner published, except for his "The Marionettes", which he essentially self-published -- in a few hand-written copies -- as a young man.

Faulkner is known for an experimental style with meticulous attention to and . In contrast to the minimalist understatement of his peer , Faulkner made frequent use of "stream of consciousness" in his writing, and wrote often highly emotional, subtle, cerebral, complex, and sometimes Gothic or grotesque stories of a wide variety of characters—ranging from former slaves or descendents of slaves, to poor white, agrarian, or working-class Southerners, to Southern aristocrats.

In an interview with "" in 1956, Faulkner remarked, "Let the writer take up surgery or bricklaying if he is interested in technique. There is no mechanical way to get the writing done, no shortcut. The young writer would be a fool to follow a theory. Teach yourself by your own mistakes; people learn only by error. The good artist believes that nobody is good enough to give him advice. He has supreme vanity. No matter how much he admires the old writer, he wants to beat him." Another esteemed Southern writer, , stated that, "The presence alone of Faulkner in our midst makes a great difference in what the writer can and cannot permit himself to do. Nobody wants his mule and wagon stalled on the same track the Dixie Limited is roaring down."

Faulkner also wrote two volumes of poetry which were published in small printings, "The Marble Faun" (1924) and "" (1933), and a collection of crime-fiction short stories, "".

Faulkner received the 1949 Nobel Prize for Literature for "his powerful and artistically unique contribution to the modern American novel." He donated a portion of his Nobel winnings "to establish a fund to support and encourage new fiction writers," eventually resulting in the . He donated another portion to a local Oxford bank to establish an account to provide scholarship funds to help educate education majors at nearby in .

In 1946, Faulkner was one of three finalists for the first " Mystery Magazine" Award. He came in second to . [ [http://www.oregonlitrev.org/v2n2/OLR-rickert.htm#faulkner Oregon Lit Rev website] ]

* "The William Faulkner Audio Collection". Caedmon, 2003. Five hours on five discs includes Faulkner reading his 1949 Nobel Prize acceptance speech and excerpts from "As I Lay Dying", "The Old Man" and "A Fable", plus readings by Debra Winger ("A Rose for Emily", "Barn Burning"), Keith Carradine ("Spotted Horses") and Arliss Howard ("That Evening Sun", "Wash"). Winner of AudioFile Earphones Award.
* "William Faulkner Reads: The Nobel Prize Acceptance Speech, Selections from As I Lay Dying, A Fable, The Old Man". Caedmon/Harper Audio, 1992. Cassette. ISBN 1-55994-572-9
* "William Faulkner Reads from His Work". Arcady Series, MGM E3617 ARC, 1957. Faulkner reads from "The Sound and The Fury" (side one) and "Light in August" (side two). Produced by Jean Stein, who also did the liner notes with Edward Cole. Cover photograph by Robert Capa (Magnum).

* [http://town.hall.org/radio/HarperAudio/080294_harp_ITH.html William Faulkner reads the 1949 Nobel Prize acceptance speech and excerpts from "As I Lay Dying", "The Old Man" and "A Fable".]