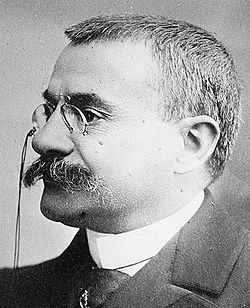 He was born at Pamiers, in the Ariège département. He wrote articles on foreign affairs for the République Française and Paris, and in 1888 was elected conseiller général of his native département, standing as "un disciple fidèle de Léon Gambetta." In the following year he entered the chamber as deputy for Foix. He was appointed under-secretary for the colonies in the second Ribot cabinet (January to April 1893), and retained his post in the Dupuy cabinet till its fall in December 1893. It was largely owing to his efforts that the French colonial office was made a separate department with a minister at its head, and to this office he was appointed in the second Dupuy cabinet (May 1894 to January 1895). He gave a great impetus to French colonial enterprise, especially in West Africa, where he organized the newly acquired colony of Dahomey, and despatched the Liotard mission to the upper Ubangi.

While in opposition, he devoted special attention to naval affairs, and in noted speeches he declared that the function of the French navy was to secure and develop colonial enterprise, deprecated all attempts to rival the British fleet, and advocated the construction of commerce destroyers as France's best reply to England. On the formation of the second Brisson cabinet in June 1898 he succeeded Albert Auguste Gabriel Hanotaux at the foreign office, and retained that post under the subsequent premierships of Dupuy, Waldeck-Rousseau, Combes and Rouvier.

In 1898 he had to deal with the delicate situation caused by Captain Marchand's occupation of the town of Fashoda in the Sudan (the Fashoda Incident) for which, as he admitted in a speech in the chamber on 23 January 1899, he accepted full responsibility, since it arose directly out of the Liotard expedition; and in March 1899 he concluded an agreement with Britain by which the difficulty was finally adjusted, and France consolidated her vast colonial empire in North-West Africa. In the same year he acted as mediator (with main mediator being J. Cambon, French ambassador in Washington) between the United States of America and Spain, and brought the peace negotiations to a successful conclusion.

Delcassé was an expansionist and very anti-German. Kaiser Wilhelm called him "The most dangerous man for Germany in France". Delcassé improved relations between France and Italy: at the same time, he adhered firmly to the alliance with Russia, and in August 1899 made a visit to Saint Petersburg, which he repeated in April 1901. In June 1900 he made an arrangement with Spain, fixing the long-disputed boundaries of the French and Spanish possessions in West Africa. Finally he concluded the Entente Cordiale with Great Britain, covering colonial and other questions which had long been a matter of dispute, especially concerning Egypt, Newfoundland and Morocco. Suspicion of the growing entente between France and England soon arose in Germany, and in 1905 German assertiveness was shown in a crisis which was forced on in the matter of French policy by Delcassé personally, a sore point with Germany. The situation became acute, and was only really relieved by Delcassé's resignation in early 1906.

He retired into private life, was prevailed upon to return in 1909 as chairman of a commission appointed to investigate the French navy. Later he promulgated closer cooperation between the British and French fleets. This arrangement was an important factor in leading Britain to side with France against Germany when World War I started. He continued during the war as foreign minister, before retiring in 1915.