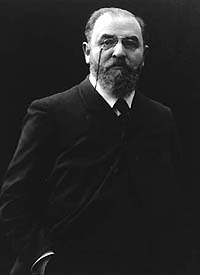 He was born in Paris, and was trained in . After holding a subordinate office (1876) in the department of public works, he became successively prefect of the Tarn (1882) and the (1885), and then returned to Paris to enter the ministry of the interior. He became prefect of police in November 1887, at the critical moment of 's resignation from the presidency. In the following year he entered the chamber, being elected deputy for the , in opposition to General Boulanger, and joined the radical left. He was under-secretary for home affairs in 's ministry of 1888, and resigned with it in 1889, being then returned to the chamber for Reims. In the 's ministry, which succeeded, he was minister of the interior, and subsequently, on 18 March 1890, minister of public instruction in the cabinet of Freycinet, a post for which he had qualified himself by the attention he had given to educational matters. In this capacity he was responsible in 1890 for some important reforms in secondary education.

He retained his office in 's cabinet in 1892, and was minister of justice under at the end of that year, when the were making the office one of peculiar difficulty. He energetically pressed the Panama prosecution, so much so that he was accused of having put wrongful pressure on the wife of one of the defendants in order to procure evidence. To meet the charge, he resigned in March 1893 but again took office and retired only with the rest of the Freycinet ministry.

In November 1895 he formed his own cabinet, distinctively radical, which fell as the result of a constitutional crisis arising from the persistent refusal of the senate to vote supply. The Bourgeois ministry seemed to think that popular opinion would enable them to override what they regarded as an unconstitutional action on the part of the upper house; but the public was indifferent and the senate triumphed. The blow damaged Bourgeois's career as an "homme de gouvernement". As minister of public instruction in the Brisson cabinet of 1898 he organized courses for adults in primary education. After this short ministry he represented his country with dignity and effect at the Hague peace congress, and in 1903 was nominated a member of the permanent court of arbitration.

He held somewhat aloof from the political struggles of the Waldeck-Rousseau and Combes ministries, travelling considerably in foreign countries. In 1902 and 1903 he was elected president of the chamber. In 1905 he replaced the as senator for the department of Marne, and in May 1906 became minister of foreign affairs in the Sarrien cabinet. He was responsible for the direction of French diplomacy in the conference at . He was delegate to both Hague Conferences held on 1899 and 1907.

Following he became President of the Council of the and won the for his work in 1920.

* [http://www.nobel-winners.com/Peace/leon_bourgeois.html About Leon Victor Auguste Bourgeois]
*Initial text from a .