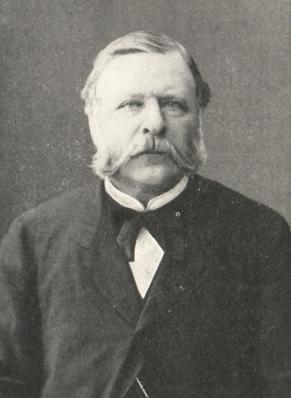 He was born at (), the son of a wealthy Englishman, who had established a large spinning factory in France and had been naturalised as a French subject, and his French wife. After receiving his early education in , he was sent to , and then to , where he achieved second-class honors and won the chancellor's medal. He also rowed in the victorious Cambridge eight in the on the .

Returning to France, he devoted himself for some years to archaeological research. He travelled in , and , and his experiences and discoveries were recorded in two "Mémoires", recognised by the French Institute, and in his "Mélanges de numismatique et de philologie" ("Numismatic and Philological Miscellanies", 1861).

Except for his essay on "The Protestant Church in France," published in 1856 in "Cambridge Essays", his remaining works all concerned archaeology. They include his "Fastes de l'empire romain" ("The Splendours of the Roman Empire"), and editions of 's "" and of ' "Voyage archéologique" (1868-1877). He was elected, in 1865, a member of the .

After standing unsuccessfully for a Chamber of Deputies seat for the "département" of the constituency in 1865 and 1860, Waddington was returned by that constituency in the election of 1871. He was Minister of Public Instruction in the short-lived cabinet of 19 May 1873.

Senator for the Aisne

In 1876, having been elected senator for the Aisne, he was again entrusted by Prime Minister Dufaure with the Ministry of Public Instruction. Because he was a , he was not permitted to combine the Ministry of Public Worship with the Public Instruction portfolio, as had been the custom in ministerial assignments. His most important project, a bill transferring the granting of degrees to the state, was passed by the Chamber, but thrown out by the Senate.

He continued to hold office under , with whom he was overthrown on the famous "seize mai" (16 May 1877). The triumph of the republicans at the general election brought him back to power the following December as Minister of Foreign Affairs, again under Dufaure. He was one of the French plenipotentiaries at the . The cession of to the was, at first, denounced by the French newspapers as a great blow to his diplomatic reputation, but he obtained, in a conversation with Lord Salisbury, a promise that the United Kingdom would, in return, allow France a free hand in .

Early in 1879 Waddington succeeded Dufaure as Prime Minister. Holding office by sufferance of , he kept peace between the radicals and the reactionaries till the delay of urgent reforms lost him the support of all parties. He was forced on 27 December to retire from office.

He refused an offer to become ambassador in London, and in 1880 was reporter of the committee on the adoption of the "scrutin de liste" at elections, on which he delivered an adverse judgment.

In 1883 he accepted the London embassy, which he continued to hold till 1893, showing an exceptional tenacity in defence of his country's interests. His second wife, the American , wrote her recollections of their diplomatic experiences - "Letters of a Diplomatist's Wife, 1883-1900" (New York, 1903), and "Italian Letters".