ACTION is a public bus service operating in Canberra, ACT, Australia. It is operated by the ACT Department of Territory and Municipal Services. The name ACTION is an acronym of Australian Capital Territory Internal Omnibus Network.

Other bus services in Canberra are operated by Deane's Transit Group and Royale Limousines, who operate the Airport Express service.

There are no other modes of public transport operating within the ACT. 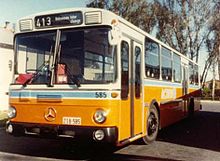 [1] Within Australia, the Canberra Bus Service (later known as "ACTION") was:

The first public bus service in Canberra was run by the Commonwealth Department of Public Works for the benefit of the workers constructing buildings in the new city. Starting in October 1923, the service originated from construction camps and 'tent cities' at the Causeway and Pialligo and the temporary railhead at Eastlake (now Kingston). Two Charabancs carried people to various building sites in Canberra City and Parkes.

The general public was first served in July 1925 when a private operator, Mrs Helen Barton, began running buses between Ainslie and Eastlake into the only shopping centre in Queanbeyan. Although a privately owned service linking Queanbeyan and Canberra still operates today, private operations within Canberra were short lived because the Federal Capital Commission started its own service in July 1926.

Four AEC Renown buses provided the Commission's service that ran between a southern terminus at Eastlake and a northern terminus at Ainslie, using several different routes. This route pattern was maintained for the next 25 years.

With the opening of Parliament House in May 1927 and the associated relocation of Commonwealth Government Departments to Canberra, the frequency of service offered by the Canberra City Omnibus Service increased as the population of the new city grew.

During the early 1950s bus services were expanded to Narrabundah, Yarralumla and O'Connor. These routes were extended further in the late 1950s with the development of Dickson and Campbell. Almost all the buses served the Kingston and Manuka shopping centres.

The first Woden Valley (Hughes) service was introduced on 19 August 1963 following the first occupancy of houses in 1963. Similar early services were provided for other areas. From 1961 the new Russell Offices complex demanded a growing number of additional peak services, including feeders from the City. The Canberra fleet had grown from 25 buses in 1942 to over 90 by 1966.

On 25 March 1968, after much consultation and consideration, a reformed bus system for Canberra began. This involved new bus timetables and driver schedules, based on not less than half–hourly services on all routes throughout the day with synchronised movements through the main centres. This new system included the first express bus service between Woden and the City (Route 16) and created the need for an interchange at Woden between express and local services. A temporary 'on street' interchange was established on Melrose Drive, Lyons.

Canberra's first off street bus interchange at the Woden Town Centre was opened on 4 December 1972. It was one of the first purpose-built suburban bus terminals in Australia.

On 14 February 1977, a new system was unveiled - the Australian Capital Territory Internal Omnibus Network (ACTION) - in association with a major program to upgrade the service by the purchasing of new vehicles, a new range of pre-purchased tickets, passenger facilities such as shelters and a new colour scheme for the buses.

In June 2008, to coincide with the launch of Network 08, ACTION's logo and corporate colours were modified.

ACTION's route and timetable information can be found at http://www.action.act.gov.au/routes_timetables.html.

ACTION operates two separate networks of bus routes; one during weekdays and the other on weekends and public holidays. The latest change to the bus routes and timetables occurred on 15 November 2010.[2]

Blue Rapid services provide a high-frequency link between the City and the bus stations at Belconnen, Woden and Tuggeranong Town Centres. Blue Rapid services consist of the 300 series routes on weekdays and route 900 on weekends and public holidays.

During weekday daytime, Blue Rapid routes commence from suburbs in Belconnen or Tuggeranong then travel through all bus stations along the trunk (or common) route and terminate at the last station (and vice-versa). At night the Blue Rapid service consists of Route 300 which travels only between bus stations, but does not extend to the suburbs.

On weekends and public holidays, Route 900 travels between all stations as well as the Erindale Centre. Some Route 900 services on Saturday service only Woden, City and Belconnen.

All Blue Rapid services are scheduled to be operated by wheelchair accessible buses and most by buses fitted with bicycle racks. 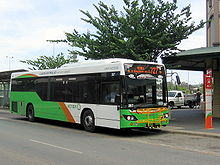 The service commenced on 16 November 2009 under the name Redex (Rapid Express Direct) as a trial service between Gungahlin and the Railway Station. On 15 November 2010, the service was renamed Red Rapid, renumbered as route 200 and extended to the Direct Factory Outlets centre in Fyshwick.

All Red Rapid services are scheduled to be operated by wheelchair accessible buses and most by buses fitted with bicycle racks.

ACTION's regular weekday services are identified by a one- or two- digit route number. These routes operate either as feeder services to a single town centre or connect two or three town centres via suburban streets.

During weekends and public holidays, all bus services use a three-digit route number in the 9** range. These services generally do not provide the same level of service as the weekday services.

Xpresso services are routes which operate during weekday peak hours to provide direct links to the City, Parliamentary Triangle, Airport Business Parks and Fyshwick or direct services between bus stations bypassing the City. These services are designed to reduce the travel time for commuters to get to and from work.

Xpresso services are numbered 7**, except for route 170, which is classed as an Xpresso Route but travels along the Blue Rapid trunk route between Woden and City Bus Stations.

Other weekday peak hour services operate as an extension to existing route services. These routes are numbered as 1** and 2** where ** represents the two numbers of the regular route service. The 100 series routes travel along the Blue Rapid trunk route between Woden and City Bus Stations. The 200 series routes travel via Barton, Kings Avenue, Russell Offices then either Constitution Avenue and the City or to Campbell Park.

School services are provided by ACTION to public and private primary schools, high schools and colleges. These have route numbers between 401 and 899. These services can only be accessed by school students and staff, and are not used by the general public. They are not listed on timetables at bus stops.

Details of school services can be found at http://www.action.act.gov.au/school_services.html

A - Student fares apply to Australian Primary, High School and Secondary College students and full-time students attending an accredited Australian tertiary education institution, not including a member of the Defence Force, who undertake at least 15 hours per week class time.

MyWay is the pre-purchased ticketing system for use on ACTION buses.[4] It uses credit card-sized contactless smart cards onto which credit is loaded. Passengers are required to 'tag on' when boarding the bus and 'tag off' when exiting, at which point the appropriate fare is calculated and, if required, deducted from the stored value in the MyWay card. MyWay cards were made available to ACT Seniors Card-holders on 21 February 2011 and released to the remainder of the community on 7 March 2011.

The MyWay system uses Parkeon software and equipment including Wayfarer 200 consoles[5] and Axio card readers.[6] The system was built and installed by Parkeon's Australian distributor, Downer EDi.[7] Instead of being developed from scratch, MyWay was adapted from Transperth's SmartRider system which also uses Parkeon hardware and software.

A - Concession does not include Students or Children
B - Tertiary Student fares apply to full-time students attending an accredited Australian tertiary education institution, not including a member of the Defence Force, who undertake at least 15 hours per week class time
C - School Student fares apply to Australian Primary, High School and Secondary College students
D - Applies to trips commenced before 9am and between 4.30pm and 6pm.
E - Applies to trips commenced between 9am and 4.30pm and after 6pm.
F - Fare caps apply only if all trips are tagged on and off. Default fare will apply when trips not tagged off.
G - This fare only applies on non-school days H - Default fare will apply from 1 January 2012.

A further 5% discount will apply if the MyWay card is topped-up using direct debit or BPAY. 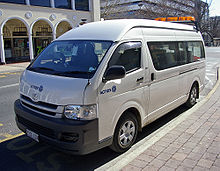 ACTION's regular service fleet comprises 430 buses, made up of the following models:[9]

). Each rack can hold two bicycles. Passengers may load a bicycle onto the rack for free, but must pay a regular fare to travel on the bus.[22]

The Irisbus Agora Lines, Scania L94s, MAN A69s and Scania K320s sport a green, orange and white livery. Apart from buses with all over advertising or special designs, the remainder of the ACTION bus fleet have a livery featuring ACTION's former corporate colours of blue, orange and white.

ACTION's vehicles also include Toyota Hiace Commuter vans driven by supervisors which can be used to transport passengers in case of a bus breaking down, Hino Dutro trucks used by mechanics to attend broken down buses and a single Mack tow truck. 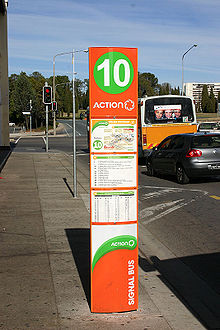 ACTION operates six bus stations, which act as hubs for the districts of Canberra.

City Bus Station is located on East Row, Mort Street and Alinga Street with some services departing from Northbourne Avenue during peak. Limited local access is permitted on Mort and Alinga Streets, while East Row is a bus-only street. Woden and Tuggeranong Bus Stations are off street stations which permit access only to buses, essential traffic and emergency vehicles.

Yellow and black signs and posts mark bus stops in the ACT. Most stops consist of a steel pole with a rectangular "Bus Stop" sign, however there remains some stops with a wooden post with the words "Signal Bus". Orange bollard stops, which include detailed timetable and route information, have been installed at major bus stops and along the Blue and Red Rapid routes.

Many Canberra bus stops feature a concrete bunker bus shelter (see photo) which were first installed in 1975. These shelters are an iconic feature of Canberra. There are a variety of other bus shelters within the ACT; currently Adshel holds a contract to install and maintain bus shelters (both with and without advertising) in the ACT.[24]

ACTION has three bus depots to house its bus fleet.