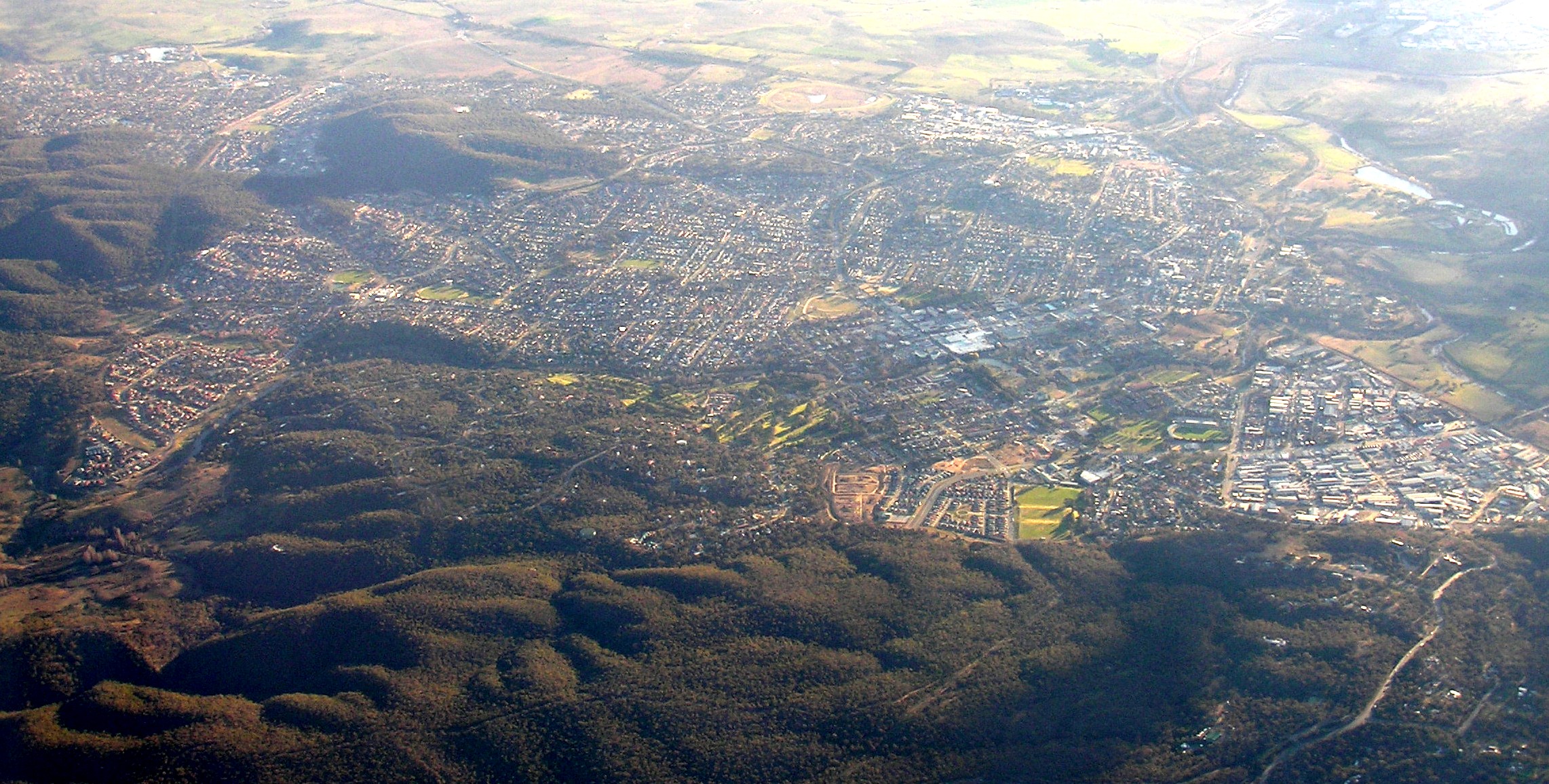 Queanbeyan is a city and local government area () in south eastern , . It is a city overshadowed somewhat by its proximity to the n federal capital city of : it has effectively become a de facto district of the nearby capital city as it lies on the border and is approximately 10km from Canberra's CBD, Civic. The border itself is defined by a railway line. The runs through Queanbeyan, near the centre of the city.

Queanbeyan has a population of 36,331 and has been said to be the "fastest growing city in Southern NSW".

The town grew from a squattage held by ex- inn keeper, , on the banks of the . The original name was Quinbean which means "clear waters".

Queanbeyan was officially proclaimed a township in with a population at that time of about 50. The name was also used for the surrounding parish. Some of the significant historic buildings still standing date from those early days. Traces of gold were discovered in and lead and silver mines also flourished briefly. Settlers were harassed by s, of which , , and were some of the more notorious.

The Commercial Banking Company of Sydney Limited (CBC, now part of the ) opened in Queanbeyan on 19 September, 1859. The Bank of New South Wales began service in Queanbeyan in 1878. "The Golden Age" (now "") was Queanbeyan's first newspaper and was founded in by John Gale. In 1880 the residence of John James Wright, the first mayor of Queanbeyan, was constructed along the edge of the Queanbeyan River. In 1982 that building became the Queanbeyan Art Centre.

Queanbeyan, an increasingly successful primary producing district, was proclaimed a Municipality in February incorporating an area of 5,700 acres (23 km²). The reached Queanbeyan railway station in and it became the junction for the lines going to and . The town is served by the twice-daily Xplorer service between Canberra and .

William James Farrer, the wheat experimentalist, established Queanbeyan's reputation as an agricultural district with his famous "Federation" rust-free strain, developed on his property "Lambrigg" at . Farrer's work was only slowly recognised elsewhere in Australia, but local farmers supported him, particularly in his development of "Blount's Lambrigg", another strain which in gave hope to farmers after the disastrous season of when crops had failed after heavy Christmas rains.

At the height of its rural prosperity Queanbeyan boasted sixteen public houses and six flourmills powered by wind, water, horse and steam. The Royal Hotel on Monaro Street opened in 1926. Canberra was "dry" from 1910 at the time of the territory's foundation until 1928 when Federal Parliament had relocated from Melbourne. In that period many of the capital's residents crossed the border to drink at hotels in Queanbeyan.

By Queanbeyan had little difficulty in meeting the first basic requirement of city status; the population had risen to more than 15,000 and a future population of at least that number was assured. City status was accordingly granted on , . On 21 July, 1975 the Queen's Bridge was opened. This bridge took pressure off the existing bridge in linking Monaro Street directly to the east. From 1982 to 1989, the team played their home games in Queanbeyan, at .

Queanbeyan is a regional centre providing the opportunity for people to work in and live in . The city is home to a large shopping centre known as Riverside Plaza. Queanbeyan has most of the major fast food outlets and selected speciality stores. Queanbeyan has two government high schools, Queanbeyan High and Karabar High. Queanbeyan primary schools include Queanbeyan Public School, Jerrabomberra Public School and St. Gregory's. Queanbeyan has a major hospital, ambulance station, indoor and outdoor swimming pool, community centre, public library and several parks. There is no longer a cinema in Queanbeyan. Much of the growth of Queanbeyan is found in , this suburb being created in 1992 and now having a population of over 6000. The city is served by the privately owned bus company, . On 16 December, 2006, level 3 water restrictions were introduced for the first time in Queanbeyan. [See [http://www.qcc.nsw.gov.au/page.aspx?page=65 Queanbeyan City Council - compulsory water restrictions] ]

Queanbeyan includes a diverse range of Indigenous, African, European, Asian and Pacific cultures. Clubs and associations in Queanbeyan cater for many of these groups, including residents having Dutch, Macedonian, Italian or Mediterranean origins Fact|date=February 2007.

The Queanbeyan Show, which is now 111 years old, is held annually at the Queanbeyan Showgrounds in November over two days. There are equestrian events, a sideshow alley, art and craft displays, cooking exhibits, an agricultural pavilion and livestock exhibitions. Also held is a Showgirl, Miss Junior Showgirl and Tiny Tots competition.

In February, the Queanbeyan Showgrounds play host to the annual "Convoy for Kids" to aid cancer research. The event is widely supported by community groups, regional businesses and the emergency services. The event attracts hundreds of commercial vehicles, trucks, prime movers and bushfire brigade vehicles. The highlight of the afternoon is the sounding of horns, which can be heard for miles around. Other regular events throughout the year include the Rodeo in March, Field Days, and a camping and off-road vehicle show.

Queanbeyan leans towards the and is the Federal marginal seat of Eden-Monaro, currently held by the Hon Mike Kelly for the Labor Party and is in the State seat of Monaro, currently held by Mr Steve Whan for Labor. The Jerrabomberra community has tended to vote Liberal at past Federal elections but at the 2003 State election voted for the first time strongly Labor against the then sitting National Party Member.

* (Oaks Estate is sometimes mistakenly assumed to be part of Queanbeyan but is in fact located in the .)

Sometimes called "Struggle Town" by neighboring residents disparagingly referring to its predominantly makeup. This culminated in a political incident on 15 May 1997 when ACT member for Ginninderra, Ms Roberta McRae, stated that “poor people live in Queanbeyan and the rich in Canberra” which caused much public anger and resulted in her being disciplined by her party, the ALP. [ [http://www.hansard.act.gov.au/HANSARD/1997/pdfs/19970515.pdf Federal Government Hansard 15th May 1997] ]