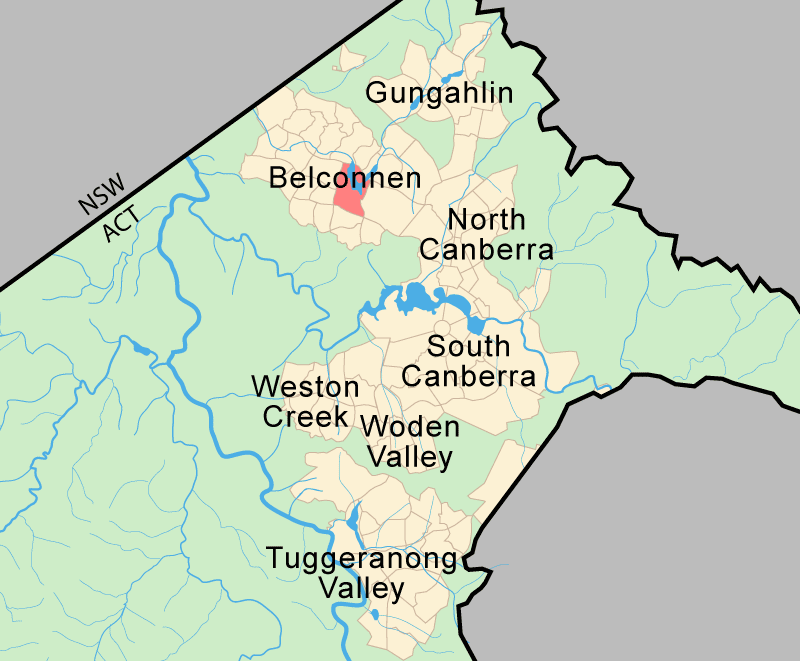 Belconnen (postcode 2617) is a suburb in the district of . It contains the , and residential areas, particularly to the south of the suburb, , where significant numbers of medium density dwellings are located. It is bounded by Ginninderra Drive, Aikman Drive, Eastern Valley Way, Belconnen Way and Coulter Drive. It has a number of parks such as Diddams Close Park and John Knight Memorial Park. The large Westfield shopping mall is located at the town centre. It has an area of 4.39 km² and was first settled in .

Belconnen has the highest density of different kinds of rocks outcropping of any Canberra suburb.It is at the intersection of two faults that form an X shape across Canberra. These are the Deakin Fault and the Winslade Fault.Green grey of the Walker Volcanics is in the south along Belconnen Way.Deakin Volcanics purple rhyodacite is around the north end of Josephson St.Deakin Volcanics green grey and purple rhyodacite goes east from Lathlain Dr to Chandler St.Grey green and quartz Hawkins Volcanics is in a strip from the north west corner heading south east between two branches of the Deakin fault to around Chandler St and Hennessey St.A porphyry of Green-grey Dacitic intrusive containing large white Feldspar crystals is west of Eastern Valley Way and in between the two arms of Lake Ginninderra.Glebe Farm intrusion is found to the south and east of Lake Ginninderra.Ordovician Pittman Formation is in the extreme south east and far north east of the town center.Calcareous from the Yass Subgroup is to the west of Lake Ginninderra. Dark grey and black laminated shale from the Acton Shale member is found on the west side of the Diddams Close Park in between the two arms of the lake. [Henderson G A M and Matveev G, Geology of Canberra, Queanbeyan and Environs 1:50000 1980.]