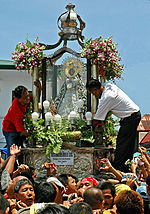 The statue of Our Lady of Sorrows of Turumba, Pakil, Laguna, in a gilded carroza (carriage).

History of the Virgin of Turumba

The Image of Our Lady is a 9" x 11" oil painting on canvas. The Face of Mary is contorted by pain from the daggers plunged in her heart. This relic is presently kept at the Parish of San Pedro Alcantara in Pakil, Laguna The second image of the Virgin Mary as Our Lady of Sorrows is a replica of the image of Nuestra Señora de las Antiguas from Spain.

The image, according to tradition, belonged to some missionaries who crossed Laguna de Bay in a launch. When the launch was shipwrecked, some of its relics were washed ashore including the image of the Virgin.

Original Image of Our Lady of Turumba

One Friday morning, some fishermen found the image in the nets. Believing it was a religious image, they decided to drop it off at a parish church. When they started to carry the painting, they found that it was heavy. They tried to carry it in many directions, until it was near the church of Pakil. While they headed that way, the wind and current aided their course; and when they landed, they left the image on a rock so they could continue their fishing duties.

A group of women found the image one Sunday morning. Although it had rained during the night, the canvas was dry. When they tried to take it away, they could not move it; even the strongest among them, Mariangga, could not lift it. They quickly told the parish priest, who in turn called the sacristans, choir members and churchgoers to get the image. As they lifted the image, the people around begun to sing and dance. To their surprise, the image gave way. And So the Turumba to Our Lady was born.

The word turumba is from the Filipino phrase "natumba sa laki ng tuwa" or tremble in great joy. The first Turumba in Our Lady's Honor was held on September 15, 1788.

The Seven days of Sorrows are known to the Philippines as Lupi fiestas:

Church of St Peter of Alcantara in Pakil, Laguna, where the image is enshrined.

3rd Lupi or Pistang Biyatiko falls on the 2nd Wednesday after Easter Sunday.

4th Lupi or Pistang Biyernes falls on the 3rd Friday after Easter Sunday.

5th Lupi or Pistang Linggo falls on the 4th Sunday after Easter Sunday.

6th Lupi or Feast of the Ascension falls on the 5th Sunday after Easter.

7th Lupi or Feast of the Holy Spirit falls on the Sunday of Pentecost.

The Image is also taken on a Procession on May 12, The Town Fiesta of Pakil. On the Sunday nearest September 15, The Catholic Church Celebrates the national feast of the discovery of the image.

Homage to the Virgin of Sorrows is done by the way of Song and dance, drumbeat and shill cries of its devotees that the people regard as co-sharing with Mary's Grief during the Passion of Christ. The Turumba episodes are called Lupi (meaning to Fold) it is so because at the closing of every festivities, the Novena Booklet is folded to mark the pause in preparation for the Next Lupi.

Dresses of the Virgin are Shredded and given to pilgrims as tokens. It was said that when the piece of cloth from the Virgin is kept close to one person, miraculous powers and against personal injury, accidents, fire and calamities happen.

The Statue is enshrined at the retablo in the main altar, The image is dressed in Violet as a sign of sorrow for her Son's passion (but sometimes dresses another color, it depends on the donations) And the Original image is enshrined at a chapel in the Church. St Peter of Alcantara Parish is located in Pakil, Laguna; over facing Laguna de Bay

1. The Dancing Virgin of Pakil, Laguna