Nativity of the Theotokos

Nativity of the Theotokos

Icon of the Nativity of the Theotokos. Saint Anne is on the left, and Saint Joachim is on the right; in the center, the newborn Theotokos is being bathed by a nursemaid.

The Nativity of the Theotokos, celebrating the birth of Mary, is one of the Twelve Great Feasts of the Eastern Orthodox liturgical year. It is celebrated on September 8 on the liturgical calendar (for those churches which follow the traditional Julian Calendar, September 8 falls on September 21 of the modern Gregorian Calendar).

According to the sacred tradition of the Orthodox Church, Mary was born to elderly and previously barren parents by the names of Joachim and Anna (now saints), in answer to their prayers. 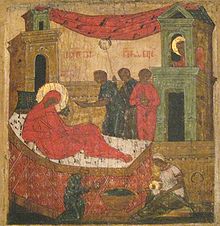 Orthodox Christianity does not accept the Roman Catholic doctrine of the Immaculate Conception of Mary (according to which Mary was preserved from that original sin which befalls all other descendants of Adam and Eve, in anticipation of her giving birth to the sinless Christ). The Orthodox Church does not share the Western, Augustinian understanding of the transmission of original sin, so the question does not arise in Orthodox theology. All Orthodox are agreed that Mary was kept free from actual sin by God's grace,[1]