The L. Ron Hubbard House, also known as the Original Founding Church of Scientology, is a historic house museum and former Scientology church located at 1812 19th Street, NW in the Dupont Circle neighborhood of Washington, D.C., United States.[2] The home served as the residence of Scientology founder L. Ron Hubbard from 1955 until 1959[3], during which time he incorporated the Founding Church of Scientology and performed the first Scientology wedding.[2][4][5] The building is a contributing property to the Dupont Circle Historic District, a neighborhood listed on the National Register of Historic Places.[1]

The row of buildings located at 1810-1820 19th Street, NW was designed by local architectural firm Wood, Donn, & Deming in 1904.[6] Notable owners of the home during the early 20th century included United States Senators James K. Jones[7] and Claude A. Swanson.[8]

Hubbard purchased the home in 1955, the same year he organized the Founding Church which met at 1826 R Street, NW from July 21, 1955 until 1959.[2][9] The building later served as the home of the Academy of Scientology, previously located at 1845 R Street, NW and known as The Academy of Religious Arts and Sciences. In January 1963, the U.S. Food and Drug Administration (FDA) ordered a raid against the Academy's 19th Street location, seizing more than 100 e-meters (electronic devices used by Scientologists) and 200 pieces of literature. The raid resulted in a lawsuit filed by the FDA against the Founding Church. In 1971, the Church and FDA reached a settlement which included a ruling that all e-meters bear a prominent warning label.[10] The seized items were returned to the Founding Church in October 1973.[11]

Additional Scientology organizations once located at the L. Ron Hubbard House include the National Academy of American Psychology (NAAP).[12] After the Founding Church sold the property in the mid-1970s, it was once again used for residential purposes. An organization called the Friends of L. Ron Hubbard repurchased the home in 2004.[2] 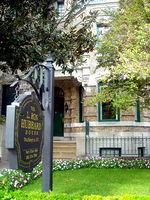 The three-story L. Ron Hubbard House is an example of Mediterranean Revival Style architecture, a design frequently used by Waddy Butler Wood and his associates. The building's exterior consists of cream-colored brick, accented with stone and wood trimming. Decorative features include a two-story bay window, red-tiled roof, and Flemish gable.[6]

The museum opened in 2007 following a year-long renovation to restore the building to its 1957 appearance. It contains a recreation of the Hubbard Communications Office and various literature describing Hubbard's early life. A tour of the museum is available by appointment only.[2][13]