The Citizens Commission on Human Rights (CCHR) is an advocacy group established in 1969 by the Church of Scientology and psychiatrist Thomas Szasz.[1][2][3] The group promotes several video campaigns which support views against psychiatry. The organization holds that mental illness is not a medical disease, and that the use of psychiatric medication is a destructive and fraudulent practice.[4] The CCHR continues to be entirely controlled by and subject to policy directives issued from the Church of Scientology. The group is headquartered in Los Angeles, California.[5]

CCHR's views on psychiatry are a reflection of the position held by L. Ron Hubbard, the founder of Scientology, whose writings express very strong opinions against psychiatry.[6][7] CCHR advocates that there is no biological evidence to support psychiatric theories of mental disorders. 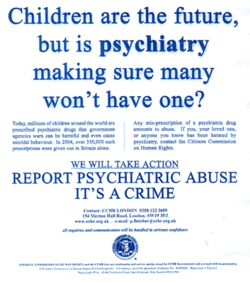 The CCHR achieved an early victory in a 1969 Pennsylvania case involving Victor Győry, a Hungarian refugee who had been committed to a psychiatric hospital against his will in April of that year.[8][9] The police officers committing Győry said he had tried to kill himself.[9] Doctors at Haverford State Hospital, failing to realise that Győry spoke very little English and was trying to address them in Hungarian, judged him "incoherent" and diagnosed him as a paranoid schizophrenic.[10] The hospital refused Győry's request for legal representation, and administered drugs and electroshock treatment to him against his will over a three-month period.[8][9][11] An aide at the hospital eventually notified the CCHR, who, under an initiative led by Szasz and lawyer John Joseph Matonis, took the case to court and secured Győry's release.[9]

The CCHR continued to lobby for legislative reform on mental health issues such as the keeping of detailed computer records on involuntarily committed patients and their families, and "drug experimentation" without patients' consent.[7][9] The CCHR would typically request a tour of a psychiatric hospital, issue a public report based on patient testimony and other sources, and then push for legal investigations and reform.[9] Its early focus was on involuntary commitment procedures.[9]

Since then, the group has organized media campaigns against various psychiatrists, psychiatric organizations and pharmaceutical companies, including Eli Lilly, the manufacturer of Prozac. One campaign is said to have caused a major fall in sales of Prozac, causing considerable commercial damage to the company.[12]

The group campaigned against the use of Ritalin for the treatment of attention-deficit hyperactivity disorder, a disorder which the organization dismisses as nonexistent.[13][14][15] The campaign was part of the Ritalin class action lawsuits against Novartis (the manufacturer of Ritalin), CHADD, and the American Psychiatric Association (APA); all five lawsuits were dismissed in 2002.[citation needed]

In 2003, the CCHR presented a report with the title "The Silent Death of America's Children" to the New Freedom Commission on Mental Health, with case histories of several dozen under-aged psychiatric patients who had died as a result of psychotropic drug treatment and restraint measures in the 1990s and early 2000s.[16]

In 2004, the CCHR sponsored a bill requiring doctors to provide patients with information about a medication's side effects before prescribing any psychotropic drugs, while also mandating a legal guardian's signature.[3] Opponents of the bill argued that these additional procedures might discriminate against mentally-ill patients while delaying treatment.[3] The bill attracted widespread disagreement from the medical establishment, including the Massachusetts Department of Mental Health, who opposed it on the grounds that it compromised informed consent.[3] The Massachusetts Psychiatric Society also opposed the bill, believing that it would interfere with the doctor-patient relationship.[3]

On October 5, 2006, National Mental Health Screening Day, the CCHR picketed outside of Riverside Community Care in Wakefield, Massachusetts, holding a protest rally against mental health screening. According to journalist Gary Band in the Wakefield Observer, "The protest fell somewhat flat because Riverside has not conducted these screenings since 2001."[17]

"Psychiatry: An Industry of Death" museum

In December 2005, CCHR opened the "Psychiatry: An Industry of Death" Museum on Sunset Boulevard in Hollywood, California. The museum has displays alleging psychiatry's long-standing "master plan" for world domination, Adolf Hitler's central role in the plan, and in the words of reporter Andrew Gumbel, "a display holding psychiatry to blame for the deaths of Ernest Hemingway, Del Shannon, Billie Holiday, and Kurt Cobain..."[18][19]

From 1988 to 1990 the Australian government held the Chelmsford royal commission inquiry into Deep Sleep Therapy (DST). For a decade prior, the CCHR had been pushing for an investigation of the Chelmsford Private Hospital in New South Wales, and its head, Dr. Harry Bailey, who had been practicing DST from 1963 to 1979.[20] Honorable Justice John (J. P.) Slattery, Royal Commissioner, is quoted as stating that the CCHR "contributed considerably to advance the cause of the Chelmsford patients in their campaign for an open inquiry into the hospital."[citation needed] The inquiry discovered that deep sleep therapy had killed 24 patients, not counting patients who had killed themselves, and close to a thousand had suffered brain damage.[21] Of the former patients, 152 received reparations from a fund totaling in excess of 5 million dollars.[22]

Chelmsford Hospital was forced to close in 1990, and two of its psychiatric staff were brought on charges in 1992.[23] Dr. Bailey himself stepped down in 1979 due to the CCHR's protest campaign, and committed suicide by drug overdose in 1985, the night before he was subpoenaed to appear in court.[24] His suicide note read, in part: "Let it be known that the Scientologists and the forces of madness have won."[25]

In 1988, the CCHR claimed that Professor Sir Martin Roth of Newcastle University had used LSD in tests on mental patients in the 1960s.[29] The statements were publicised in the Newcastle Times newspaper, which was ordered by an English court to pay "very substantial" libel damages to Roth after the court found that CCHR's claims were "highly defamatory" and "utterly false."[29]

The group has implied that the September 11 attacks were influenced by psychiatrists.[18] Hubbard claimed psychiatrists caused decline in the universe eons ago.[30]

Jan Eastgate, President of the CCHR and winner of the Church of Scientology Freedom Medal for her work on human rights, has been implicated in covering up the sexual abuse of an 11-year-old girl in the Australian branch of the church.[31][32] Eastgate was head of the Australian CCHR at the time and the girl was abused by her Scientologist stepfather between the ages of 8 and 11 years. Eastgate has denied the allegations, labelling them "egregiously false".[31] Eastgate was arrested by New South Wales Police on the 30th of March 2011 on charges of perverting the course of justice. She was released on conditional bail.[33]

While Freedom of Speech is one of the human rights the CCHR claims to defend, it moderates comments to its own presence on social media platforms such as YouTube.[34]

Retired neurologist Dr. Fred Baughman has served as a medical expert for the CCHR.[35] Although psychiatrist Peter Breggin worked with CCHR from 1972, he later dissociated himself from the organization in 1974 as a result of his disagreements with actions taken by the Church of Scientology.[36]

Marie L. Thompson, writing in the 2006 book Mental Illness, commented that the CCHR has been a "highly effective activist organisation", which by 2005 was represented by 133 chapters in 34 countries.[37]

CCHR have produced a number of documentaries promoting their view of modern psychiatry. These include "Making A Killing" "Prescription for Violence" "The Marketing of Madness" "Dead Wrong" and "Psychiatry: An Industry of Death" which was made to accompany the CCHR museum of the same name.

The Marketing of Madness: Are We All Insane?

The Marketing of Madness is a documentary that purports to show a hidden, unscientific, profit driven side to the mental health and psychiatry industry. The film begins to err early on. The first interview is with Claudia Keyworth, who has studied Bio-Energetic medicine, and believes that healing is best accomplished using the "energy field of the human body"[38]. On the topic of mental illness, she asserts: "they say you have a chemical imbalance of serotonin and dopamine, but there's never been a study to prove that, ever." This is quite false; a great deal of research suggests that such chemical imbalances play a role in various mental disorders (see also Biology of depression, and Causes of mental disorders)[39][40][41][42].

The film claims that psychiatrists have convinced the public that normal, negative human experiences are mental illnesses. A case in point, the narrator asserts that psychiatrists seek to label typical shyness as a "social anxiety disorder". This case, however, is currently disputed by mainstream medicine, in which Social anxiety itself is accepted as coming in varying degrees, and often at relatively low levels (i.e. typical shyness). One is diagnosed with a social anxiety disorder only at more debilitating levels, where there is an "intense fear in social situations"[43]. In other words, unlike a shy individual, a person diagnosed with social anxiety disorder is likely to suffer from any number of symptoms such as nausea, stammering, panic attacks and more.