Trabuco Creek (shown on federal maps as Arroyo Trabuco[1]) is a small river in the U.S. state of California, flowing from the westernmost extreme of Riverside County through Orange County to join San Juan Creek in the city of San Juan Capistrano. 21.8 miles (35.1 km) long, its watershed covers 54 square miles (140 km2) in southeastern Orange County, including portions of three incorporated cities. Rising in a wild and undeveloped canyon in the southern Santa Ana Mountains, Trabuco Creek generally flows west and later south, and its upper and middle reaches are one of the few relatively undeveloped stretches of river of Orange County.

Tongva and Luiseño Native American people lived along the perennial stream in settlements and hunting camps for 8,000 years before the invasion of Spanish colonization.[2] Trabuco is Spanish for a Blunderbuss, a type of shotgun. Local legend attributes a Franciscan missionary friar traveling with the Gaspar de Portolà Expedition in 1769 for the story that a blunderbuss was lost in the upper canyon by the creek, and so the naming of the area. John (Don Juan) Forster received a Mexican land grant in 1846 for the canyon lands and creek and established Rancho Trabuco here.

Although the riverside habitat is generally degrading in quality because of increasing pollution from urban and agricultural runoff, Trabuco Creek once supported one of the largest steelhead habitats of Orange County, and birds, large mammals, and amphibians still flourish in the rich riparian zone along its undeveloped portions. Upper Trabuco Creek, also referred to as Trabuco Canyon, is a popular hiking and off-roading area, and long, narrow O'Neill Regional Park on the creek is also a well-known recreational venue.

Trabuco Creek begins in the Trabuco Ranger District of the Cleveland National Forest, close to the boundary of Orange and Riverside Counties, at an elevation of 4,310 feet (1,310 m).[3] Its first few miles are in a large and deep canyon just north of Los Piños Peak, a roughly 4,400-foot (1,300 m) summit of the Santa Ana Mountains, and south of Trabuco Peak, which rises to 4,604 feet (1,403 m). From its headwaters, the creek flows in this narrow gorge for its first 4 miles (6.4 km).[4] Inside the arid, roughly 2,000-foot (610 m)-deep gorge, Holy Jim and Falls Canyon creeks join Trabuco before it passes the unincorporated community of Trabuco Canyon, where Live Oak Canyon Creek joins from the right.[4][5] 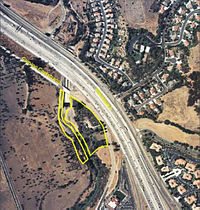 Trabuco Creek crosses underneath Interstate 5 in a culvert. Note that at first, there was only one culvert. Due to increasing flood control requirements, there are now two.

Entering the boundaries of the city of Rancho Santa Margarita, the creek proceeds to flow southwest through a long, narrow wilderness preserve known as O'Neill Regional Park. Once out of the mountains, Trabuco Creek slows down dramatically and winds across a wide and sandy bed known as the Plano Trabuco.[4] It crosses under California State Route 241, a toll road that follows the western foothills of the Santa Ana Mountains, and passes close to Lake Mission Viejo, a popular recreational lake in the city of Mission Viejo.[5][6]

Still steadily bending southwards, Tijeras Canyon Creek shortly joins Trabuco from the left bank, then the combined waters pass under a high bridge for Oso Parkway and leave the southern boundary of O'Neill Regional Park.[6] Even after exiting the park, the creek winds through a broad riparian zone at the bottom of a shallow canyon, but after passing Saddleback College, located near the southern junction of California State Route 73 and Interstate 5, the creek flows through a residential community and is diverted into twin culverts underneath the interstate.[5][7]

The creek drops over two large man-made drop structures, the first of which marks the beginning of a small canyon the creek has carved out with the additional flow it incorporates from urban runoff.[8] Passing into the northernmost extreme of San Juan Capistrano, its major tributary, Oso Creek, joins from the right, and the creek flows south through an agricultural area until it is forced into a concrete channel, passes by Mission San Juan Capistrano, and enters San Juan Creek within downtown San Juan Capistrano.[5][9] 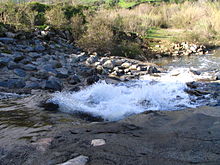 An artificial concrete waterfall on Trabuco Creek, downstream of the Metrolink rail bridge and upstream of the Oso Creek confluence

Geologically the present-day Trabuco Creek basin did not exist as early as the end of the most recent Ice Age. The Santa Ana Mountains, forming the northern, eastern and southeastern boundaries of the entire San Juan Creek watershed, did not begin to form until roughly 5.5 million years ago (MYA). The Santa Ana Mountains at the headwaters of San Juan Creek are composed primarily of Jurassic-age (196.6-145.5 MYA) igneous and sedimentary rock overlain by Cretaceous-age (145.5-65.5 MYA) granite, gabbro, tolamite, siltstone, sandstone and conglomerates. The underlying rock of the Santa Ana foothills are Tertiary-age (65.5-2.59 MYA) sandstone.[14]

As the Santa Ana Mountains rose, Trabuco Creek first formed as a canyon cut into the southeastern part of the range. Many of the creeks draining the range—including Santiago Creek, San Diego Creek, Bell Canyon and San Juan Creek—first formed in the same way. The uplift of the San Joaquin Hills, a coastal mountain range generally following the Pacific coast of Orange County, created a physical barrier for these streams flowing off the Santa Ana Mountains. But by the Wisconsinian Glaciation, an enormous climate change helped solve that problem. During the Wisconsinian Glaciation, a period of time that lasted from about 70,000 to 10,000 years ago, glaciers and ice sheets moved south from northern Canada into the northern United States, radically altering the climate of the entire continent. The arid Southern California climate was supplanted by a temperate rainforest climate that would receive rainfall in excess of 80 to 90 inches (2,000 to 2,300 mm) per year. Trabuco Creek and other streams along the Orange County coast became powerful rivers that cut their way through the San Joaquin Hills.[15]

This changed climate did not last, and by the time it had ended, several enormous canyons had been cut through the 600-to-1,000-foot (180 to 300 m) high San Joaquin Hills. The Trabuco/San Juan Creek canyon is one of the less prominent ones, and is the last canyon before the San Joaquin Hills continue south into San Diego County. Because of the enormous erosion channels carved out by the Wisconsinian-era rivers, the creeks now flow on broad and deep beds of sediment that have filled these canyons.[15] 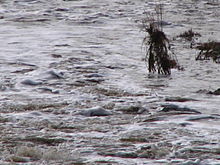 Trabuco Creek filled with urban runoff after a storm

The Trabuco Creek watershed, especially the Oso Creek subwatershed, has been severely and negatively affected by suburban development. The lower riparian area of the creek has been damaged and pollution from the creek travels down the last, channelized part of San Juan Creek to Doheny State Beach, creating pollution problems in Capistrano Bay at Dana Point. Such pollutants include urban runoff, fertilizers, heavy metals and oils.[16][17]

There is one dam on Trabuco Creek, located inside Trabuco Canyon.[18] There are also many drop structures on the lower creek.[19]

Riparian zones, consisting of small to medium-sized trees and a variety of other streambank flora, line Trabuco Creek, Tijeras Canyon Creek, and the upper tributaries including Live Oak Canyon, Falls Canyon and Holy Jim Canyon. These riparian habitats are now only found in the upper watershed. Oso Creek is heavily developed, and has little to no riparian vegetation.[21] Lower Trabuco Creek still supports some riparian zones, but they have decreased in health because of the introduction of urban and agricultural runoff.

Aside from the large mammals including mountain lions, coyotes, and bobcats (the last California grizzly bear in the Santa Ana Mountains was shot near Trabuco Canyon) the creek was once a productive habitat for steelhead trout.[22] Its upper portions, which include numerous gravel beds and bars, stream pools, and cascades, are suitable habitat for the anadromous fish, which still exist as rainbow trout in upper Trabuco Creek. Because of extensive modifications—affecting the stability and water quality of the creek—steelhead no longer migrate to the upper reaches of the Trabuco Creek watershed. Conversely, steelhead were sighted in 2003 and 2005 along the creek. A project was proposed in 2005 to build a fish ladder into a concrete drop structure in Trabuco Creek that blocks steelhead passage. $1.2 million was allocated by the California State Wildlife Conservation Board in 2005 to fund the project, but it has not been begun.[23]

The canyon is in the California chaparral and woodlands Ecoregion, with California oak woodland and Chaparral plant communities of California native plants, with invasive plant species of Noxious weeds in the riparian and 'bunch grass' grasslands.

It is hypothesized that Hokan-speaking Native Americans of Shoshone origin occupied a 12-mile (19 km)-long, 8-mile (13 km)-wide strip of land along much of central Trabuco Creek and most of Oso Creek, its major tributary, beginning at an unknown date.[24] The Shoshoneans centered around the Trabuco/Oso Creek confluence and had a primarily hunter-gatherer way of life.[24] Eventually, the people in the Southern Orange County/Northern San Diego County area settled down in semi-permanent villages, and this area became part of the Acjachemen tribal territory. There were two Acjachemen villages on the main stem of the Trabuco and one on Oso Creek, as well as numerous settlements at the confluence of San Juan and Trabuco Creeks all the way downstream to the Pacific.[25] This was the historic landscape encountered by the Spanish conquistadors when they began expeditions to the area in the 18th century.[26]

In 1769 Gaspar de Portola led an expedition to the canyons of the Santa Ana Mountains. They camped on a bluff east of Trabuco Creek on the night of July 24–25, and the next day, one of the soldiers found his trabuco, or blunderbuss (the type of gun), missing. The expedition never found the gun, and they named the creek Arroyo Trabuco as a memorial.[27] Mission San Juan Capistrano was established in 1776 at the confluence of San Juan and Trabuco creeks.

Rancho Trabuco was a Mexican land grant that covered most of the upper Trabuco Creek watershed. Created in 1841, its boundaries were changed in both 1843 and 1846. In 1880, the land was sold to F.L.S. Pioche and the final owners were James L. Flood and Jerome O'Neill, who created the O'Neill Ranch out of the Rancho Trabuco. The name stayed and most of the ranch is now the site of O'Neill Regional Park, which was dedicated on October 5, 1982.[28]