North Philadelphia, formerly Germantown Junction Station,[3] is a railroad station on the Northeast Corridor in Philadelphia, Pennsylvania, United States. It is an above-ground station at 2900 North Broad Street in the city's North Philadelphia section. The Southeastern Pennsylvania Transportation Authority's (SEPTA) Regional Rail accounts for most of the station's service, and five Amtrak trains stop each weekday.

The station is 4.4 miles from upper level 30th St Station via the outbound track, or 4.5 miles via the inbound. It is immediately northeast of where SEPTA's Chestnut Hill West Line diverges from the Northeast Corridor, which carries SEPTA's Trenton Line. Platforms for the two lines are a short distance apart.

Two high-level island platforms serve three of the four Northeast Corridor tracks. The Trenton Line trains make regular stops at these platforms. The station and tracks are owned by Amtrak, and five of their trains stop at this station each weekday.[4][5] On the SEPTA-owned Chestnut Hill West line, two low-level platforms serve Chestnut Hill West trains, which normally treat North Philadelphia as a flag stop.[6]

The station is within a few blocks of the North Broad station on SEPTA's Main Line (formerly belonging to the Reading Company), and the North Philadelphia subway station on SEPTA's Broad Street Line. The station has SEPTA ticket offices, retail shops, restaurants, and access to Broad Street businesses. As of 2006, the SEPTA Trenton and Chestnut Hill West had an average of 219 weekday boardings and 245 weekday disembarks.[7] These numbers are a key reason why North Philadelphia is among Amtrak's least busy stations.[8]

According to the Philadelphia Architects and Buildings project, the main structure of the station was built from 1896 to 1901 for the Pennsylvania Railroad, and was designed by Theophilus Parsons Chandler, Jr. It was Philadelphia's sole stop for the Broadway Limited train,[9] as well as the General Motors Aerotrain. The station includes a 333-space parking lot, and is on the National Register of Historic Places and the Historic American Building Survey. 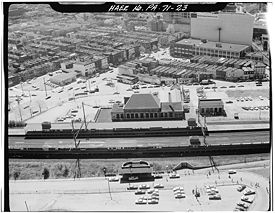 Aerial view of the station from 1977.