The O2 Arena (visually typeset in branding as The O2 arena, referred to as North Greenwich Arena in context of the 2012 Summer Olympics and Paralympics) is a multi-purpose indoor arena located in the centre of The O2, a large entertainment complex on the Greenwich peninsula in London, England.

With a capacity of up to 20,000[4] depending on the event, it is second largest arena in the UK after the Manchester Evening News Arena (MEN Arena) and one of the largest in Europe. In 2008, The O2 Arena took the crown of the world's busiest music arena from the MEN Arena, a title which it had held since 2001.[5]

Background to the arena 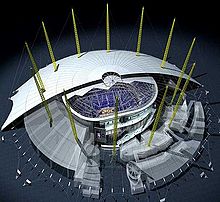 Cut away image of The O2 showing The O2 Arena within.

Following the closure of the Millennium Experience at the end of 2000, the Millennium Dome was leased to Meridian Delta Ltd. in 2001, for redevelopment as an entertainment complex. This included plans for an indoor arena.

The seating arrangement throughout the whole arena can be modified, similar to the MEN Arena.[6] The ground surface can also be changed between ice rink, basketball court, exhibition space, conference venue, private hire venue and concert venue.

The arena was built to reduce echoing which has previously been a problem in many London music venues.[7] The sound manager for U2, Joe O'Herlihy, worked with acoustic engineers to introduce measures such as sound absorbing material on the arena roof and the bottom of strategically placed seats to reduce echoing.

Despite The O2 arena's being open for only seven months of the year, the venue sold over 1.2 million tickets in 2007, making it the third most popular venue in the world for concerts and family shows narrowly behind the MEN Arena (1.25 million) and Madison Square Garden in New York (1.23 million). In 2008, it became the world's busiest venue taking the crown from MEN Arena with sales of more than two million.[8] 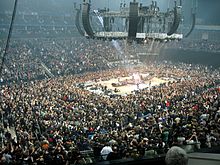 Metallica performing at The O2 Arena

The O2 Arena since its opening in 2007 has been host of many concerts, from UK bands and artists to international superstars. The O2 was named the World's Best Venue by Pollstar in 2009.

Anschutz opened The O2 Arena on 23 June 2007, with a free event for all of the building's employees billed as the O2 premiere featuring Peter Kay, Tom Jones, Kaiser Chiefs and Basement Jaxx, with the show hosted by Dermot O'Leary. Snow Patrol then played a concert to an audience made up of sponsors, local residents, local business employees and winners of an online competition. Bon Jovi was the first band ever to play to the general public at the arena on 24 June 2007. Michael Jackson was preparing for a sell out series of 50 shows at the O2, due to take place 13 July 2009 – 6 March 2010, when he died of cardiac arrest. Miley Cyrus also had 2 sold out concerts in 2009, promoting her album Breakout

Rihanna is set to perform 10 sold out nights at the venue with her Loud Tour which is the most by any other female.

In June 2011 the cast of Glee performed a series of concerts as part of their sold out European tour. Katy Perry performed 2 sold out nights on October 2011.

The arena hosted the first ever Turbo Tennis Tournament on 15 September 2007 which was won by Andy Murray. From 2009 until 2012 it has been selected as the venue for the ATP World Tour Finals.[9]

The arena has also hosted two National Hockey League contests, which started the 2007–08 NHL season, on 29 and 30 September, both involving the Anschutz-owned Los Angeles Kings and their regional rivals from Southern California, the Anaheim Ducks.[10] 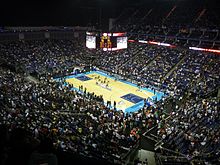 An NBA exhibition match between the Boston Celtics and the Minnesota Timberwolves took place at the arena on 10 October 2007. The game sold out more than three months beforehand. The arena also hosted the Miami Heat and New Jersey Nets (NBA) pre-season games before the 2008–09 season.[11] Just like the previous NBA exhibition game, Tickets for the game sold out three months beforehand.[12]

The Chicago Bulls and the Utah Jazz played an exhibition match on 30 October 1994 in London as part of NBA Europe Live. The Chicago Bulls won the match 102–101 in front of a crowd of 18,689.

The Great Britain National Basketball Team have also played several games there, with an attendance of 7,244 for the win over the Czech Republic qualification match for EuroBasket 2009. It is expected this will soon become a home arena for the National Side.

It was used for the 2009 World Artistic Gymnastics Championships.[15]

The first sporting event to take place was the Commonwealth Boxing Lightweight title fight featuring Amir Khan on 14 July 2007. In March 2008, the arena hosted a match between David Haye and Enzo Maccarinelli, and in November 2008 Haye fought Monte Barrett.

UFC 120 featuring Michael Bisping and Yoshirio Akiyama had an attendance of 17,133 breaking the European attendance and gate receipts record which was set by the MEN at UFC 105. It was also the biggest box office sporting event in O2 Arena history. 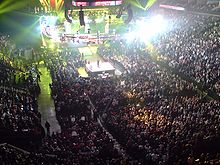 WWE Raw at The O2 arena.

WWE has used the O2 Arena to host its television shows Raw, SmackDown, and ECW. This included the taping of Monday Night Raw and an episode of the now defunct Heat, broadcast on 14 April 2008, with SmackDown and ECW being taped the following night.

The WWE brought their TV tapings back to the O2 Arena in April 2009, following a WWE Friday Night SmackDown house show at the arena the previous November. WWE Raw was slated to be taped 20 April 2009, with SmackDown and ECW the following night. The main events included Triple H vs Randy Orton for the Raw taping, and Triple H vs Randy Orton in the first WWE Championship steel cage match in London for the SmackDown taping.

WWE returned to the O2 Arena on 11 November 2009 for the DX Invasion Tour, featuring John Cena defending his WWE title against Chris Jericho. Before that match, Jericho had glowsticks chucked at him from the live crowd, to which he reacted angrily until Cena's entrance.

In April 2010, the WWE returned once again to film episodes of WWE Raw (12 April) and WWE SmackDown and WWE NXT and an exclusive Matt Hardy vs Carlito WWE Superstars match (13 April).

WWE was back again in November 2010 with the Raw World Tour. Higlights of the night included a one-off special appearance by Bret "The Hitman" Hart, a tag team match between Randy Orton, John Morrison, Wade Barrett and Sheamus, and a titanic main event between John Cena and The Miz.

WWE returned to the O2 Arena on 18–19 April 2011, when they host a televised Raw and SmackDown event.

WWE will again be at the O2 Arena on 11th November 2011, with the stars of Raw such as John Cena, The Miz, R-Truth and Triple H scheduled to appear.

On 11 February 2010 the O2 Arena hosted the opening night of the Whyte and Mackay Premier League Darts, Britain's biggest indoor sporting event. Fans travelled from all over the UK to see the likes of Phil Taylor, Raymond van Barneveld, Simon Whitlock and James Wade in action.[citation needed] Over 8,000 fans attended the event.[citation needed]

In May 2008 Chris Rock became the first comedian to play the arena, breaking a Guinness World Record for the largest audience for a comedy show,[20] though this was never an official record and has since been broken by German comedian Mario Barth.[21] Lee Evans, Steve Coogan and Dylan Moran all appeared at the arena in 2008, followed by Canadian stand-up Russell Peters in February 2009. High profile stand-ups Al Murray, Eddie Izzard and Tim Vine have all performed in 2009. Michael Mcintyre performed four nights at the O2 Arena. Russell Brand performed at the O2 Arena in April 2009; as well as performing stand up comedy, he recorded several scenes for his new movie Get Him to the Greek, using the audience for his stand-up as a live crowd for a rock concert.[22]

On 30 March 2010, the O2 Arena hosted Channel 4's Comedy Gala, a stand-up comedy benefit show in aid of Great Ormond Street Children's Hospital, in front of 14,000. With over 25 comedians appearing, organiser Channel 4 billed it as "the biggest live stand up show in United Kingdom history".[23]

Some of the UK's most successful comedians are now performing at the O2 Arena during their stand-up tours such as Russell Howard who performed there in his 2011 tour "Right Here, Right Now". John Cleese performed a one off performance of his "The Alimony Tour" there in early 2011. Alan Carr will perform there in his new tour "Spexy Beast" in late 2011.

The arena has hosted The Simpsons Movie, High School Musical 2 and Live Free or Die Hard premières, and also an advance screening of Alien Autopsy.

From June 2008 to July 2011, the London auditions for the television series, The X Factor have been filmed at the arena, as well as the Bootcamp segments at the indigO2 for the 2008 series.

The arena has hosted performances of Ben Hur Live and Walking with Dinosaurs The Arena Spectacular. Other such events include Viva La Diva, Strictly Come Dancing live tour.

Ice shows have included Disney On Ice and High School Musical On Ice.

In October 2010, the arena was host to the 25th Anniversary concert of the musical Les Misérables

In September 2009, Hillsong Church London's 10-year anniversary church service was hosted at the O2 Arena. The venue was filled to capacity, causing over 4,000 attendees to be turned away at the doors.

On 20 August 2010 there was a Christ Embassy Night Of Bliss with Pastor Chris Service held at the O2 Arena.

In 2011, a combined event for the celebration of Pentecost was held at the O2 Arena as a joint effort between churches Holy Trinity Brompton (HTB Churches), Hillsong Church London and Jesus House. They had an attendance of over 16,000 delegates, they will return in 2012.

The O2 Arena held the Scout event Live 07 in 2007 to celebration of the centenary of the Scout movement.

The O2 Arena hosted Andrew Reynolds Entrepreneurs Bootcamp[24] – the largest conference event held to date at the venue. Andrew Reynolds Bootcamp broke a UK record with its innovative High Definition projection screen – not only the largest ever used at the O2 Arena – but the largest indoor screen in the UK. Measuring around 34.5 metres by 12 metres, the huge screen formed the central part of a huge stage set for the Entrepreneurs event which was provided by smyle.co.uk.