The MEN arena is the largest indoor arena in Europe with a capacity of 21,000, ahead of the 20,000 O2 Arena in London and is one of the world's busiest indoor arenas hosting music and sporting events such as boxing and swimming.[2] It is Manchester's primary, all-year round concert venue ahead of Manchester Central, the Etihad Stadium and Old Trafford Cricket Ground.

Manchester Evening News will end its thirteen-year naming sponsorship at the end of 2011, when the venue will revert to the name of Manchester Arena[3] as a new sponsor naming partner is sought.

The Manchester Evening News Arena was constructed as part of Manchester's unsuccessful bid for the 2000 Summer Olympics.[4] Construction cost £52 million of which £35.5m was provided by government grants and £2.5m from the European Regional Development Fund. Manchester aimed to build an arena capable of hosting large music events to replace older venues such as the Free Trade Hall and the GMEX Centre.[5]

The arena was opened in 1995, and initially sponsored by NYNEX CableComms (a British cable television provider, part of the NYNEX Corporation, a telephone service provider in the United States) as the NYNEX Arena. The arena took its current name in 1998 after the NYNEX brand merged with Cable & Wireless Communications in 1997.

The structure was designed by DLA Ellerbe Beckett, Ove Group, and Austin-Smith:Lord. A large truss measuring 105 metres spans the roof. The arena is clad in reinforced concrete to increase sound insulation.[7] The arena was opened on 15 June 1995.

The arena was one of the first indoor venues in Europe to be built following the traditionally American sports arena layout of 360 degree seating,[8] and is the only arena in the UK to have this feature (London's O2 Arena also has 360 degrees seating, but only on its lower tier, whereas the M.E.N. Arena features it on both tiers). Other European indoor venues built to the same concept include the Lanxess Arena in Cologne, Arena Zagreb in Zagreb, Spaladium Arena in Split, Belgrade Arena in Belgrade, O2 Arena in Prague, and O2 World Hamburg in Hamburg. 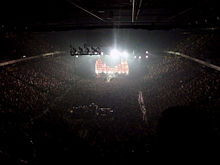 Facing the stage from the opposite end of the arena

The M.E.N. Arena has attracted a huge number of customers since opening its doors on 15 June 1995, as it is Europe's largest concert venue. The opening event held there was a performance by Torvill and Dean, as part of their farewell tour. The venue attracts over a million customers each year for concerts and family shows alone, making the venue one of the world's busiest indoor arenas, in regard to this the M.E.N. Arena was named "International Venue Of The Year" in 2002 by concert industry insiders in the 'Pollstar' awards, and was nominated in the same category in 2002, 2003, 2004, 2005, 2006, 2007, 2008 and 2009. The M.E.N. Arena was also named "Busiest Arena Venue In The World", based on ticket sales for concerts in 2003, 2004, 2005, 2006 and 2007 beating competition from other indoor arena's including New York's Madison Square Garden and London's Wembley Arena. (2007 figures) The Arena has also been named the 'World's Busiest Arena' from 2001 until 2007 based solely on ticket sales for concerts, attracting five and a half million customers to concerts. The M.E.N. Arena was voted 'Europe's Favourite Arena' at the TIP Awards for 2008 voted for by the numerous touring companies that bring the shows to the venue.

Janet Jackson was scheduled to perform during her All for You Tour on 5 December 2001, but the show was cancelled, due to the 11 September 2001 attacks. Kylie Minogue did a special webcast of her KylieFever2002 tour back in 2002 on MSN for fans around the world to view.

The venue was used to record Westlife's Greatest Hits Tour DVD on 14 April 2003. P!nk's performance, during her Try This Tour on 26 March 2004, was filmed & later released as a DVD, titled Pink: Live in Europe. McFly recorded their Wonderland Tour at the arena in 2005. The DVD was one of their 3 number one music DVD's. Rihanna's performance, during the Good Girl Gone Bad Tour on 6 December 2007, was filmed & later released as a DVD, titled Good Girl Gone Bad Live. The Spice Girls performed 3 shows during the Return of the Spice GirlsTour on 23/24/26 January 2008, the three last European shows of the whole tour. On 13–14 June 2008, Boyzone filmed their reunion tour, Back Again ... No Matter What DVD here.

The record for the fastest sell-out at the arena is held by Madonna when she brought her Sticky & Sweet Tour to Manchester on July 7, 2009. All 13,457 tickets that were on sale sold out in under a minute. Originally, Madonna was to perform two back-to-back shows at the arena, but the July 8 show was cancelled. 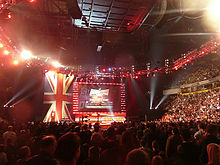 A WWE event at the arena

The arena in ice skating configuration

Many popular boxers have had bouts in the arena, such as Amir Khan, Jermaine Johnson, Ricky Hatton, Joe Calzaghe, Mike Tyson, and more recently David Haye. Hatton (a Manchester native) became a regular and favourite of the M.E.N. Arena.

WWE has hosted multiple events at the Arena over the years. It first hosted WWF Mayhem in Manchester in 1998 drawing over 19,600 people (a European record for an indoor WWF/WWE event). The arena also hosted No Mercy in 1999. On 26 October 2002 it hosted the SmackDown! UK-only pay-per-view WWE Rebellion, as it did in 2001. Also on 11 October 2004, it hosted a RAW taping, and was followed the next day by a taping of WWE SmackDown!. RAW and SmackDown! returned to the M.E.N. Arena on 13 and 14 November 2006 and returned for live tapings of RAW and Smackdown on 10 and 11 November 2008 respectively. Total Nonstop Action Wrestling (TNA), made their first appearance at the arena in January 2009 and again in January 2010.

The M.E.N. Arena has also hosted mixed martial arts events. UFC 70 on 21 April 2007, and UFC 105 on 14 November 2009 for which set the European record for largest UFC event outside the USA with 16,000 people in attendance. The World Taekwondo Qualification Event for the Beijing Olympic Games was held at the Arena on 28–30 September 2007; at this event 103 countries competed for 24 places at the Beijing Olympic Games in 2008. Also in April 2008, the arena hosted the FINA Short Course World Swimming Championships, the first time it has been held in the UK. For this occasion, the arena was transformed into a 17,250-seat swimming event venue. Two 25 m swimming pools were constructed into the floor of the arena and the pools were completed within 18 days.[10]

Monster truck racing events have also been staged at the arena in the past. To allow for the arena floor space to be extended for such events, the front section of seating in the lower tier (from around row H forward) can be removed.[11]

A meeting of Premier League Darts from the PDC Professional Darts Corporation takes place once a year at the arena, and has done since 2008.

In May 2011, the arena hosted a basketball game between the Atlanta Dream (WNBA) and the Great Britain Women's Basketball team, billed as "WNBA Live". This was the first time a WNBA team had played in Europe.

In July 2012 the MEN Arena will host international basketball as Great Britain play USA in the build up to the Olympics. 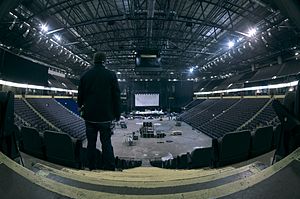 Panorama of the MEN Arena facing the main stage

The venue adjoins Victoria train station. This therefore provides good access to the arena from train lines calling here. A Metrolink tram stop is also located in the train station. This provides services to Bury in one direction and the city centre, onwards to Altrincham and Eccles, in the other. NB Those travelling from Eccles will have to change either at Cornbrook or St Peter's Square.

Visitors travelling by train to Manchester Piccadilly can either walk to the arena or catch a Metrolink tram from Piccadilly to Victoria. A number of bus routes always run to the area of the arena.

The arena has its own large car park nearby but by its nature endures delays upon departure after the event, as everyone tries to exit at the same time. Other smaller car parks are located around the city centre. On-street parking can be found in the area and on the various streets around the main Deansgate street area.