Midhurst Rother College is a mixed Academy for students aged 11 to 18, in Midhurst, West Sussex. It was officially formed on 1 January 2009 following the closure of three predecessor schools in the area. It serves a wide rural area in the Rother Valley of West Sussex. It is sponsored by the United Learning Trust in partnership with the University of Chichester and Winchester College.

The academy was formed in January 2009.[1] This followed the closure of three predecessor schools operating as part of a three-tier structure: Midhurst Grammar School, Midhurst Intermediate School and Herbert Shiner School. The Grammar school - with a history dating back to 1672[2] - had accommodated students aged 13 to 18,[3] while both intermediate schools had students aged 10 to 13.[4][5]

The new school was introduced as part of the local authority's move towards two-tier provision. The school opened with students from Year Six to Year 13, but began to operate as a standard secondary from September 2009, with the youngest students being in Year Seven, aged 11. Provision for younger students will be made in local primary schools.[6]

The college operates on two campuses in the neighbouring settlements of Midhurst and Easebourne. Students in Key Stage 3 (aged 11 to 14) are accommodated on the site of the former Midhurst Intermediate School in Easebourne. Older students are taught in the buildings of the former Grammar School in Midhurst. [7]

In 2012, a new campus will be built on the existing River Campus.[8] The new buildings will house modern classrooms and the exterior will be sympathetic to the existing buildings. The projected cost is approximately £31 million, which will include a new school bus terminus. 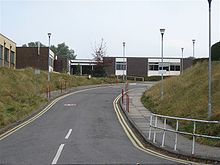 The school operates joint specialisms in Science and Mathematics. In addition, the school identifies aspects of Business and Enterprise, and ICT throughout the curriculum.[9]