Lancing College is a co-educational English independent school in the British public school tradition, founded in 1848 by Nathaniel Woodard. Woodard's aim was to provide education "based on sound principle and sound knowledge, firmly grounded in the Christian faith." Lancing was the first of a family of more than 30 schools founded by Woodard (others include Hurstpierpoint College, Ardingly College, Bloxham School and Worksop College).

Typical of major independent schools, Lancing places emphasis on what might be described as tradition — Anglican Christianity (chapel attendance is compulsory for all pupils), and sport (notably football, Eton fives, squash, tennis, hockey and cricket).

The school is based in 550 acres (2.2 km2) of countryside in West Sussex, east of Worthing near the village of Lancing, on the south coast of England. The college is situated on a hill which is part of the South Downs, and the campus dominates the local landscape. The college overlooks the River Adur and the Ladywell Stream, a holy well or sacred stream within the College grounds has pre-Christian significance.[1]

The school is a member of the Headmasters' and Headmistresses' Conference. Girls were first admitted in 1970. The school is dominated by a Gothic revival chapel, and follows a high church Anglican tradition. The College of St Mary and St Nicolas (as it was originally known) was intended for the sons of upper middle classes and professional men; in time this became Lancing College, moving to its present site in 1857.

The school's buildings of the 1850s were designed by the architect Richard Cromwell Carpenter, with later ones by John William Simpson.

Lancing boards boys and girls between the ages of 13 and 18 at a cost of about £27,000 a year. A small number of the students attend Lancing on academic and musical scholarships provided by the school; of the other pupils, some may receive some kind of bursary. Former pupils are referred to as OLs.

In 2005 Lancing was one of fifty of the country's leading independent schools which were found guilty of running an illegal price-fixing cartel which had allowed them to drive up fees for thousands of parents, although the schools made clear that they had not realised that the change to the law (which had happened only a few months earlier) about the sharing of information had subsequently made it an offence.[2] Each school was required to pay a nominal penalty of £10,000 and all agreed to make ex-gratia payments totalling three million pounds into a trust designed to benefit pupils who attended the schools during the period in respect of which fee information was shared.[3] However, Mrs Jean Scott, the head of the Independent Schools Council, said that independent schools had always been exempt from anti-cartel rules applied to business, were following a long-established procedure in sharing the information with each other, and that they were unaware of the change to the law (on which they had not been consulted). She wrote to John Vickers, the OFT director-general, saying, "They are not a group of businessmen meeting behind closed doors to fix the price of their products to the disadvantage of the consumer. They are schools that have quite openly continued to follow a long-established practice because they were unaware that the law had changed."[4]

The school day begins with 'Roll Call' at 8.15 and ends around 6pm with sports during the afternoons of alternate days. At 7pm there are two hours of 'evening school' where pupils are expected to remain in their studies and complete any prep that may have been set during the academic day. Pupils are also expected to attend lessons on Saturday mornings.

The college is divided up into houses, each house resident to between 30 and 80 pupils. 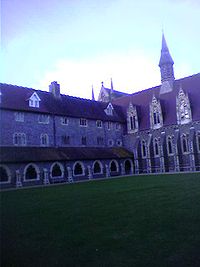 Each house has a distinctive set of 'colours' which are awarded to students for merit and/or commitment for representing the house. The award allows male students to wear a house tie.

The foundation stone of the college chapel was laid in 1868, but the chapel itself was not finished in Woodard's lifetime. In fact, the chapel remains unfinished. It stands at about 50 metres (with foundations going down 20 metres into the ground), but the original plans called for a tower at the West end which would raise the height to 100 metres. One reason that the chapel ended up as high as it did was that Woodard insisted that it be built to its full height at one end first, so that even if he died before completion the height could not be cut down to save money. The chapel is built in the English gothic style of the 14th century, with 13th century French influences. It was designed by R. H. Carpenter and William Slater, and is built of Sussex sandstone from Scaynes Hill.

The chapel was dedicated to St Mary and St Nicolas in 1911, although the college worshiped in the finished crypt from 1875. Inside can be found, amongst other things, the tomb of the founder, two organs, and a rose window designed by Stephen Dykes Bower which is the largest rose window in England being 32 ft in diameter. The chapel itself is the largest school chapel in the world.[5]

The eastern organ is a two manual mechanical organ built by the Danish firm, Frobenius and was installed and voiced 'in situ' in 1986. That year marked the completion of the rebuild of the four manual Walker organ at the west end of the chapel - both of which were showcased in the opening concert by the American organ virtuoso, Carlo Curley.

A stained glass window was recently commissioned in memory of Trevor Huddleston OL, and was consecrated by Desmond Tutu on Tuesday 22 May 2007.

The chapel is open to the public every day, Monday to Saturday from 10.00 until 16.00, and Sunday from 12.00 until 16.00. Full school services are held every Wednesday morning during term time at 08.35, and on certain Sundays throughout the year. There is also a eucharist every morning at 07.40, and benediction on a Friday evening followed by a lower school service on Saturday mornings at 8:25.

Lancing's chapel "symbolises the importance of Christian worship" at the college. Every year the building brings thousands of visitors to its doors.

The school is one of only a small number in the country to have Eton fives courts. The Upper Field's cricket square is most highly regarded.

During World War II, students were evacuated to Downton Castle in Herefordshire.[6] Both the main college and the prep school buildings were requistioned by the Admiralty and became part of the Royal Navy shore establishment HMS King Alfred. 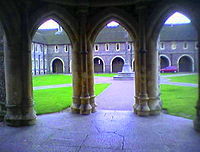 Despite the principles of Victorian austerity on which the school was founded, Lancing has recently completed a number of developments that include a new design centre. The new art school was opened by HRH the Duke of Gloucester in September 2009.

A development council is operating under the chairmanship of Sir Tim Rice. It acts in an advisory capacity on development and fundraising matters. 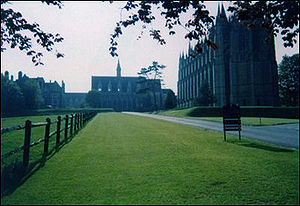 South West side of the College

The College owns a number of properties based along the College Drive and all the properties in Hoe Court, a road extending from the rear of the College towards the village of Lancing.

Mowden School, as it was originally known, was founded by B A Snell at Mowden Hall, in Essex, in 1896. In 1901, it moved to Lansdowne Place, Hove and in 1913 moved again to its present site. Edward Snell took over from his father in 1937 and, on his death in 1973, his son, Christopher, became headmaster.

In September 2002, the school passed into the care of Lancing College and the current headmaster, Alan Laurent, took over from the Snells. Although the house was purpose built for a preparatory school in 1913 by Christopher Snell¹s grandfather, there has been a continuing programme of modernisation and development.

In addition to two dedicated IT rooms, each classroom has its own computer, projector and interactive smartboard and there is a well-equipped science laboratory, technology room and an attractive library and reading room. Spacious sports fields surround the school, which accommodate pitches for all the main games and sports, including an all-weather Astroturf area.

Traditionally the school was for boys only, but in September 2002, girls were accepted for the first time and the school became co-educational.

Mowden School became Lancing College Preparatory School at Mowden (or Lancing Prep as it is known) in September 2005.

In 2008, an ISI Inspection team concluded that, 'Lancing College Preparatory School meets its aims outstandingly well. It does this by achieving high quality in every aspect of what it provides'.