Melbourne, the second largest city in Australia, has gained international notoriety for its diverse range of street art and associated subcultures. Throughout the 1970s and 80s much of the city's disaffected youth were influenced by the graffiti of New York which subsequently became popular in inner city suburbs and along suburban railway and tram lines. After the turn of the century when stencil art first became prominent in the UK, Melbourne was one of, perhaps the first, major city outside of the UK that embraced this art form, causing a vast increase in public awareness of the concept of street art.[1][2]

Around the turn of the 21st century, within the space of 3 to 4 years, many other forms of street art began to appear in Melbourne including; stencil art, woodblocking, sticker art, poster art, wheatpasting, graphs, various forms of street installations and reverse graffiti. Tags are becoming increasingly less popular as the public consciousness and local councils alike, view street art as an art form and tagging as vandalism. A strong sense of community ownership and DIY ethic exists amongst street artists in Melbourne, who endeavour for the progression of society through awareness created in part by their work.[3]

Many galleries in the central business district are now starting to exhibit stencil art and photos of stencil art, such as City Lights Gallery & Until Never Gallery. Melbourne's train lines are the main locations for graphs and tagging. Hoiser Lane is Melbourne's most famous laneway for street art with many visitors from around the world who have left their mark.[4] Prominent international street artists such as Banksy (UK), Fafi (France) and Logan Hicks,[5] have contributed work to Melbourne's streets along with many other visitors from all over the world, most prominently; Germany, Canada, USA, the UK and New Zealand.[6]

The first stencil festival in the world was held in Melbourne in 2004, in which the work of many major international street artists were exhibited.[7]

Ceramic street art on the corner of a brick building in Fitzroy, 2008

While there are small areas all over Greater Melbourne where various forms of street art can be seen, the primary areas in which street art is most dense include, in alphabetical order;[citation needed]

The proliferation of street art in Melbourne has attracted many supporters and detractors from various levels of government and in the broader community. In 2008 a tourism campaign at Florida's Disney World recreated a Melbourne laneway cityscape, decorated with street art. Victorian Premier John Brumby forced the tourism department to withdraw the display, calling graffiti a "blight on the city" and not something "we want to be displaying overseas."[10] Writer Marcus Westbury countered that street art was one of Melbourne's "biggest tourist attractions and one of its most significant cultural movements since the Heidelberg School".[11]

Some street artists and academics have criticized the State Government for having seemingly inconsistent and contradictory views on graffiti.[12] In 2006, the State Government "proudly sponsored" The Melbourne Design Guide, a book which celebrates Melbourne graffiti from a design perspective. The same year, some of Melbourne's graffiti-covered laneways were featured in Tourism Victoria's Lose Yourself in Melbourne ad campaign. One year on, the State Government introduced tough anti-graffiti laws with penalties of up to two years' jail. Possession of spray cans "without lawful excuse" on or around public transport is now illegal, and police search powers have also being strengthened. According to Melbourne University criminologist Alison Young, the "state is profiting from the work of artists doing it, but another arm of the state wants to prosecute and possibly imprison (such) people."[12] Since laws were tightened, local councils have reported a "spike" in vandalism and tagging of commissioned murals and legal street art. Adrian Doyle, founder of the Blender Studios and manager of Melbourne Street Art Tours, believes taggers have become less considerate of where they put their tags for fear of being caught by police, and are "paranoid so they are taking less time - tags are less detailed".[13] In 2007, the City of Melbourne started the Do art not tags initiative—an education presentation aimed at teaching primary school students the differences between graffiti and street art.[14]

Some local councils have accepted street art and even made efforts to preserve it. In early 2008 the Melbourne City Council installed a perspex screen to prevent a 2003 Banksy stencil art piece named Little Diver from being destroyed, however in December 2008 silver paint was poured behind the protective screen and tagged with the words "Banksy woz ere".[15] In April 2010, another 2003 stencil by Banksy was destroyed, this time by council workers. The work was of a parachuting rat, and was believed to be the last surviving Banksy stencil in Melbourne's laneways. Lord Mayor of Melbourne Robert Doyle said "This was not the Mona Lisa. It is regrettable that we have lost it, but it was an honest mistake by our cleaners in removing tagging graffiti."[16] The loss of these and other famous street artworks in Melbourne reignited a decade long debate around heritage protection for Melbourne street art.[17] Planning Minister Justin Madden announced in May 2010 plans for Heritage Victoria and the National Trust of Australia to assess street art in key locations throughout Melbourne and recognize culturally significant works for preservation.[18] Examples of street art already added to the Victorian Heritage Register include the 1983 mural outside the Aborigines Advancement League building,[19][20] and Keith Haring's 1984 mural in Collingwood.[21][22] 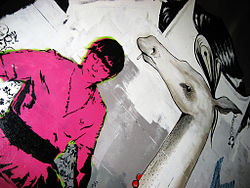 The Melbourne Stencil Festival is Australia's premier celebration of international street and stencil art. Since its inauguration in 2004 the festival has become an annual event, touring regional Victoria and other locations within Australia. The festival is held for 10 days each year, involving exhibitions, live demonstrations, artist talks, panel discussions, workshops, master classes and street art related films to the general public. It features works by emerging and established artists from both Australia and around the world.[25]

Since its inception, the Stencil Festival has featured some 800 works by over 150 artists, many of whom are experiencing their first major art exhibition, finding it difficult to be exhibited in major commercial galleries reluctant to display emerging art forms. The first Melbourne Stencil Festival was held in a former sewing factory in North Melbourne in 2004. The three-day exhibition attracted spectator numbers far beyond expectations.[26]