pronunciation (help·info) is a suburb in Melbourne, Victoria, Australia, 7 km north-east from Melbourne's central business district. Its Local Government Area is the City of Darebin. At the 2006 Census, Northcote had a population of 22,061.

The name Northcote is thought to be derived from the leader of the English Conservative Party, Stafford Henry Northcote. 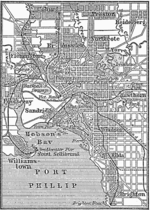 The area now known as Northcote is on the traditional lands of the Wurundjeri people. According to the Darebin Historical Encyclopedia,[2] "[w]hite settlers knew the Wurundjeri as the ‘Yarra’ tribe. They were closely associated with the Yarra River and its subsidiaries, with various subgroups of the tribe owning lands at various spots on the course of the Yarra. They were the main tribe of Aboriginal people settled in the area that would become Melbourne. Their language, Woiwurrung, also distinguished them".

The subgroups of the Wurundjeri included the ‘true’ Wurundjeri, under the clan head Jakka-Jakka. This name is also spelt as Jaga-Jaga and Jika-Jika. His was one of the signatures on John Batman’s ‘treaty’ of 1835. This clan occupied land which included parts of the Darebin Creek. The Kurnaje-berreing were further divided into two groups. Billibellary led one group, the Wurundjeri-willam; his clan’s lands included the Merri Creek and much of what is now Darebin. The other was led by Bebe-jan. His clan owned some of the land by the Darebin Creek. The final subgroup of the Wurundjeri was called the Boi-berrit, led by Bungerim. Their land was centred around Sunbury. Within these subgroups there was further division, usually on family lines, with each group owning a defined tract of land.

Under leaders like Billibellary, the Wurundjeri were able to develop reasonable working relationships with white settlers. While they remained true to their values and customs, they also became guides, messengers and workers in a world that was changing so dramatically around them. Due to the tolerance and wisdom of Aboriginal leaders like Billibellary and Beruke, and the patience and determination of Assistant Protector William Thomas, there was little violence between whites and the Wurundjeri-willam, a marked contrast to the violence and brutality that disgraces much of the early history of white settlement in Australia".

The European settlement of the Northcote area began in 1839 with a Government land sale. Many of these allotments were long, narrow strips of land running in an east-west configuration, which has resulted in the street patterns of the suburb to this day. The area to the north of (what is now) Oldis Gardens was surveyed as the township of Northcote in 1853. The name is thought to be derived from the leader of the English Conservative Party, Stafford Henry Northcote. Although he was never Prime Minister he held several important cabinet posts.

The southerly surveyed portion is now Westgarth. It was the area further north of present-day Westgarth which saw settlement and development, particularly around the mansion built by William Rucker on Bayview St in 1842 (the area now known as Ruckers Hill). Large, expensive houses were built throughout the Victorian gold rush of the 1850s. Lower Plenty Road (or High Street as it is known today) became the central street of Northcote, instead of Westgarth Street as initially proposed. A bridge was built across the Merri Creek in 1858, making access to the area more convenient. Throughout the 1850s, churches, schools, and hotels were built (see Timeline).

Throughout the 1870s the area contained a number of slaughteryards, piggeries, and claypits. One such claypit operated on the corner of Separation Street and High Street, which eventually became the Northcote Patent Brick Company, supplying much of the area's bricks. When the brickworks closed down, the site became the Northcote Plaza Shopping Centre in 1981. The quarried land became the Northcote Regional Tip, later to be transformed into All Nations Park, a public park. The Northcote Primary School on Helen Street opened in 1874. At this stage, Northcote was still a rural area, with orchards and occasional mansions.

Throughout the 1880s, land in Northcote was relatively cheap, owing to its lack of public transport. This attracted speculative property investors, as well as people of limited financial means, setting in place Northcote's reputation as a working-class suburb. Following the arrival of public transport in the late 1880s and early 1890s, the population of Northcote began to increase. More businesses opened along High Street, as well as churches and schools. The Little Sisters Of The Poor began building on a site along St Georges Road, which still exists today. The town hall was built in 1890, the same year the borough of Northcote was proclaimed. The Northcote Football Club was established in 1898, with its home ground at Northcote Park.

The Northcote Picture Theatre opened in 1912, presently its building is one of the oldest surviving picture theatres in Victoria (it is now used as a reception center). A free library opened in 1911, financed by Scottish philanthropist Andrew Carnegie. Throughout the 1920s development grew along St Georges Road. The Northcote High School opened in 1926.

Throughout the 1950s the area became home to a large number of Italian and Greek migrants. By the 1980s, gentrification of Fitzroy and Fitzroy North had pushed some of the artistic and activist communities north into Northcote.

Access to Northcote via public transport was initially via the Inner Circle Line, which when linked to the Heidelberg Line in 1888, ran close to the southern border of the suburb. The line to Whittlesea was opened in 1891, creating a direct line to Northcote, although the line initially journeyed via Royal Park, Carlton North, and Fitzroy North, before a line was built from Clifton Hill to Melbourne through the suburb of Richmond in 1901 to 1903. The northern section of the Inner Circle Line was closed to passengers in 1948, leaving the eastern section (from Melbourne to Clifton Hill, via Richmond and Collingwood).

Westgarth, to the south of Northcote proper, is the more gentrified area of Northcote, populated with cafes, bars, small fashion boutiques, and restaurants.

High Street north of Ruckers Hill is an area currently in flux. With its mix of ethnic and working class communities, it is home to numerous furniture outlets, reception centres, the Northcote Plaza Shopping Centre, factories and warehouses - as well as several vacant shop fronts. Recently the influx of numerous cafes, bars and art galleries has added to its eclectic nature, and this, combined with rising property prices, is changing the nature of the suburb. In July 2005, Darebin Council is beginning an extensive community consultation process leading to the formulation of a new Structure Plan for Northcote, known as the Northcote Place Making Project.

Currently, Northcote has a residual population of first and second generation Greek and Italian migrants, and a (declining) population of students. Northcote also has one of Melbourne's largest Lesbian communities.

All Nations Park is located adjacent to the Northcote Plaza Shopping Centre (which itself opened in October 1981 at the site of the old brickworks).

There is a large hill where the tip fills the hole where the quarry was.[clarification needed] There are skating facilities, as well as basketball courts, play equipment and picnic facilities. There is a lot of open space which many people use to fly kites and exercise their dogs. There is also a large native garden giving special attention to plants indigenous to the area, and a series of ponds.

The park was also the location of a December 2008 shooting involving police and a 15-year-old boy. The boy was shot several times and died on location.[3]

Batman Park is also the name of a 1.6 hectare (4 acres) metropolitan park. It was purchased by the council in 1907, and is recognised for its historical significance as the second oldest park in Northcote.[4] It hosts many established trees for shade and is close to buses, trains and trams.

The existing design of the formal entrance, stonewalls, drinking fountain, path layout and garden beds are part of a grand redevelopment plan of an unknown designer undertaken in the 1950s. Mature trees are the principal defining element of the park providing interest and shade throughout the year. There is also a kindergarten of the same name located in the park that has been in continuous operation for over 50 years.

The state seat of Northcote is held by Fiona Richardson, member of the Australian Labor Party (ALP) and the federal seat of Batman, which covers Northcote, is held by Martin Ferguson, also from the ALP.

The area surrounding Northcote is home to local sporting teams:

Golfers play at the course of the Northcote Golf Club on Normanby Avenue, in the neghbouring suburb of Thornbury.[9]