Collingwood is an inner city suburb of Melbourne, Victoria, Australia, 3 km north-east from Melbourne's central business district. Its Local Government Area is the City of Yarra. At the 2006 Census, Collingwood had a population of 5494.

Collingwood is one of the oldest suburbs in Melbourne and is bordered by Smith Street, Alexandra Parade, Hoddle Street and Victoria Parade.

Collingwood is notable for its historical buildings, with many nineteenth century dwellings, shops and factories still in use.

It was named after Baron Collingwood, a British admiral[citation needed][when?]. 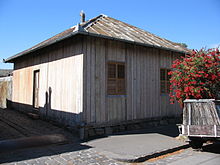 Prefabricated houses imported from Singapore during the 1850s

It was named after Baron Collingwood, a British admiral.[citation needed][when?]

Australian author Frank Hardy set the novel Power Without Glory in a fictionalised version of the suburb, named Carringbush.[2] The name is used by a number of businesses in the area, such as "Carringbush Business Centre". At one time a ward in the City of Yarra that includes part of Collingwood was actually named Carringbush.

Subdivision and sale of land in Collingwood began in 1838, and was mostly complete by the 1850s. Collingwood was declared a municipality separate from the City of Melbourne on 24 April 1855, the first to follow the state's major population centres of Melbourne and Geelong. Collingwood was proclaimed a town in 1873, and later a city in 1876.[3]

Collingwood's early development was directly impacted by the boom in Melbourne's population and economy during the Victorian gold rush of the 1850s and 1860s. This resulted in the construction of a large number of small dwellings, as well as schools, shops and churches to support this new population. Around the same time, large industrial developments such as a flour mill and the Fosters brewery were being established. 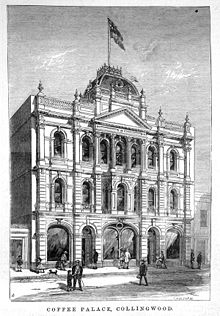 At the turn of the century Collingwood's Smith Street rivalled Chapel Street in Prahran as the dominant home of suburban emporiums and department stores. The first G.J. Coles store was opened in the street in 1912.

Since the 1950s, Collingwood has been home to many groups battling to save the suburb's unique character against development and gentrification.

In 1958 residents rallied at Collingwood Town Hall against the Housing Commission of Victoria's slum reclamation projects which would see demolition orders for 122 of the suburb's homes.[4]

In the 1970s, 150 residents protested against plans for the F-19 freeway[5] with some putting themselves in front of earthmovers during the construction.[6]

The Collingwood Action Group formed in 2006 to fight the "Banco" development, a large mixed use project on Smith Street.[7]

In 2010, over 2,000 people rallied to save The Tote Hotel, a popular live music venue which became a potential state election issue.[8]

The suburb is notable for its historical buildings, with many nineteenth century dwellings, shops and factories still in use. From its early days large commercial buildings often coexisted with small dwellings occupied by working-class families, and that mixture of industry and community continues to the present time. For example, Oxford and Cambridge Streets are dominated by imposing red-brick factories and warehouses formerly occupied by the Foy and Gibson company, but also feature a number of stone, brick and timber dwellings that date back to the earliest days of the suburb.

The Collingwood Australian rules football Club (the Magpies) has a history dating back to 1892 as an incorporated football club. They were once housed at Victoria Park. In recent years they won the 1990 premiership and won the 2010 grand final rematch against St Kilda.

PBS 106.7FM resides in Collingwood at 47 Easey St, just off Smith Street. PBS is a community radio station that celebrated its 25th year of broadcasting in 2004.

Collingwood is Melbourne's second largest gay village featuring several gay oriented entertainment venues.[9] These include the Peel dancebar which in 2007 was granted the legal right to ban heterosexual patrons from the bar. [10] [11] [12]

Madman Entertainment has its head office in Collingwood.[13][14]

The main commercial area is Smith Street, which borders Fitzroy.

Collingwood Technical School was established in July 1912 as a trades and technical training school. The school closed in 1987, forming along with Preston Technical School the basis for the formation of the Northern Melbourne Institute of TAFE, which continues to have a Collingwood campus in Otter Street.

Collingwood College, a state P-12 school, is located in the suburb.

More recently older warehouses and factories have been converted into fashionable apartments and there has been modern townhouse infill and medium density unit development.

Collingwood has many buildings listed on the Victorian Heritage Register and several notable commercial and public buildings. Yorkshire Brewery, built in 1880 to the design of James Wood with its polychrome brick and mansard roof tower was once Melbourne's tallest building. For many years it has been subject to development proposals and the heritage stables were at one stage demolished without a permit, however the site remains neglected.

The former Collingwood Post Office was built between 1891 and 1892 in the Victorian Mannerist style to the design of John Marsden is similar to Rupertswood with its tall tower.

Prominent include the Leinster Arms Hotel, established in 1865 and is the only single storey hotel built in Melbourne in that era; the Sir Robert Peel ("The Peel") Hotel and the Vine Hotel.

The ornate Collingwood Town Hall is an imposing building that was used until 1994 as the centre of local government for the City of Collingwood.

Transport within Collingwood consists mainly of narrow one way streets. The suburb is bounded by main roads: Smith Street to the west, Victoria Parade to the south, Hoddle Street to the east and Alexandra Parade to the north. Major tramlines are on Victoria Street (tram route 109) and Smith Street (route 86), which are on the edge of the suburb. Johnston, Wellington and Langridge Streets are the main arterials going through the suburb.

The Collingwood Railway Station is in neighbouring Abbotsford.