Margherita de' Medici (31 May 1612 – 6 February 1679) was Duchess of Parma and Piacenza by her marriage to Odoardo Farnese, Duke of Parma. Margherita was regent of Piacenza in 1635 and regent of the entire duchy in 1646 after the death of her husband.

She was the fourth of eight children and the second daughter born to Cosimo II de' Medici, Grand Duke of Tuscany and his wife Maria Magdalena of Austria. 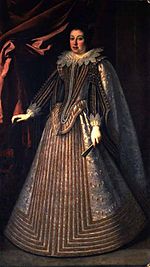 Margherita became engaged to Odoardo Farnese, Duke of Parma in 1620. They married in 1628 when he came of age. The marriage had been strongly desired by Odoardo's father, Ranuccio, who saw it as a means of strengthening the alliance between the Duchy of Parma and the Grand Duchy of Tuscany, then ruled by the Medici family.

The marriage took place in Florence on October 11, 1628 in Florence. The wedding celebrations were accompanied by much spectacle and pagentry, including the performance of Marco da Gagliano's opera La Flora, composed especially for the occasion. To welcome the couple back to Parma, Mercury and Mars, with music by Claudio Monteverdi and text Claudio Achillini was performed in the Teatro Farnese.

The years in which the couple ruled over Parma were marked by the plague of 1630 and the contrast between the splendor of the court and the tax burden to which they had subjected their subjects. The tax money was used to improve Odoardo's armies. The Duke also had a pro-French policy.

According to portraiture and the sources of the time, Margherita was a beautiful woman, as well as amiable and well-educated. Unlike his predecessors, the duke was very devoted and loyal to her and there were never any sources that claimed Odoardo had illegitimate children.[citation needed]

On September 11, 1646, Odoardo died. Their eldest son, Ranuccio was not yet old enough to rule the Duchy alone so his mother, Margherita acted as regent until her son was old enough to govern alone.

Margherita outlived at least two of her children. She died in Parma on February 6, 1679.