Argentina v England, played on 22 June 1986, was a football match between Argentina and England in the quarter-finals of the 1986 FIFA World Cup at the Estadio Azteca in Mexico City. The game was held four years after the Falklands War between Argentina and the United Kingdom and was a key part in developing the intense football rivalry between the two nations. It was also a match which included two of the most famous goals in football history, both scored by Diego Maradona. His first, after fifty-one minutes, was the Hand of God goal, in which Maradona scored with an illegal, but unpenalised, handball. His second, after fifty-four minutes, saw him dribble past six England players, Beardsley, Reid, Butcher, Fenwick, Butcher (again), and finally goalkeeper Peter Shilton. In 2002 this was voted Goal of the Century by FIFA.com voters. Argentina won the game 2–1 and went on to win the 1986 World Cup with a victory over West Germany in the final. Maradona won the golden ball for player of the tournament whilst England's goalscorer on the day, Gary Lineker, won the golden shoe for being the tournament's top scorer.

British expatriates have been credited with bringing football to Argentina in the 19th century.[1]

The rivalry between the England and Argentina national football teams, however, is generally traced back to the 1966 FIFA World Cup.[1][2][3] During the quarter-final game at Wembley Stadium, the home of the England national team, Argentine captain Antonio Rattin was sent off as Argentina lost in a game which contained excessive foul play.[4] Rattin was angered at the sending-off, feeling that the German referee had been biased towards the English, a fellow European nation, in front of their home fans, and stomped over the royal carpet in the stadium. This led England manager Alf Ramsey to describe the Argentines as "animals",[5] comments that were viewed as racist by the Argentines.[3]

Despite the popularity of Ossie Ardiles and Ricardo Villa, Argentines who played with Tottenham Hotspur in England in an era before it was commonplace for clubs to have non-British players,[3] the rivalry remained strong.

Outside football, the Falklands War in 1982 increased the mistrust between England and Argentina. The Falkland Islands, situated in the South Atlantic Ocean is a British administrative territory claimed by Argentina as the Islas Malvinas. In April 1982, Argentinian forces invaded and occupied the island; the British considered this an invasion of its own territory and sent a naval task force to recapture the Islands, which it did in June 1982. Though the two nations were never officially at war, the conflict resulted in 258 British and 649 Argentine deaths. As a result, the match taking place just four years after the war was filled with emotional charge. Following the game, Maradona stated: "Although we had said before the game that football had nothing to do with the Malvinas war, we knew they had killed a lot of Argentine boys there, killed them like little birds. And this was revenge."[3]

The 1986 FIFA World Cup was held in Mexico after the original hosts, Colombia, declared themselves unable to host the tournament. England qualified for the finals undefeated, topping Group 3 in the UEFA zone, whilst Argentina also topped their qualifying group in CONMEBOL. In the early stages of the tournament, Argentina had been comfortable, winning two and drawing one in the group stage, whilst England had qualified more narrowly, with a 3–0 win over Poland in the final match putting them into the round of 16. Both teams won comfortably against South American opposition in that round, Argentina against Uruguay and England against Paraguay.[2] Although neither team began the tournaments as favourites,[6] England's form had been improving throughout the World Cup and Argentina were buoyed by the skill of Maradona.

The game started with both teams exchanging chances.[6] Argentina began to dominate, however, with England's goalkeeper Peter Shilton saving a number of good chances, many created by Maradona. Peter Beardsley had England's best chance after 13 minutes, following a slip from Nery Pumpido in Argentina's goal, but failed to take it.[2] At half time, the score was 0–0, Argentina having had much more of the possession and territory - and done a great deal more of the running - but having failed to get through England's resolute defence.

It was the second half of the match that was to see the two incidents for which the game was to become both famous and infamous.[1][6] 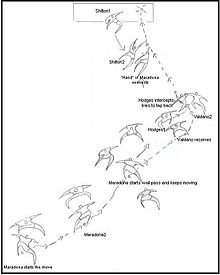 Diagram of the movement that led to the "Hand of God" goal.

Six minutes into the second half, Maradona cut inside from the left and played a diagonal low pass to the edge of the area to team-mate Jorge Valdano and continued his run in the hope of a one-two movement. Maradona's pass, however, was played slightly behind Valdano and reached England's Steve Hodge, the left midfielder who had dropped back to defend.

Hodge tried to hook the ball clear but miscued it. The ball screwed off his foot and into the penalty area, toward Maradona, who had continued his run. England goalkeeper Peter Shilton came out of his goal to punch the ball clear, with his considerable height at 6 ft 1 in (1.85 m), making him clear favourite to beat Maradona at 5 ft 5 in (1.65 m) to it. However, Maradona reached it first, with the outside of his left fist. The ball went into the goal, and the referee (Tunisian Ali Bin Nasser), not having seen the infringement, allowed the goal.

Maradona later said, "I was waiting for my teammates to embrace me, and no one came... I told them, 'Come hug me, or the referee isn't going to allow it.'"[7]

At the post-game press conference, Maradona claimed that the goal was scored "un poco con la cabeza de Maradona y otro poco con la mano de Dios" ("a little with the head of Maradona and a little with the hand of God"),[8] coining the phrase "Hand of God". Video and photographic evidence demonstrated that he had struck the ball with his hand, which was shown on television networks and in newspapers all over the world, with England manager Bobby Robson stating instead that it was 'the hand of a rascal.'[9] The goal helped intensify the footballing rivalry between the two nations: the English now felt that they had been cheated out of a possible World Cup victory,[10] while the Argentinians enjoyed the manner in which they had taken the lead.[3]

The Goal of the Century

"Goal of the Century" redirects here. For the German award, see Goal of the Month (Germany).

Just four minutes after the Hand of God goal, however, came The Goal of the Century, so called because it is often claimed to be the greatest individual goal of all time.[2][5] Héctor Enrique passed the ball to Maradona some ten metres inside his own half. Maradona then began his 60-metre, 10-second dash towards the English goal, passing five English outfield players – Beardsley, Reid, Butcher (twice) and Fenwick. Maradona finished the move by dribbling round Shilton to make the score 2–0 to Argentina.

About the goal, Maradona said, "I made the play to give it to Valdano, but when I got to the area they surrounded me and I had no space. Therefore, I had to continue the play and finish it myself."[11] He later complimented the fair play of the English team, saying, "I don't think I could have done it against any other team because they all used to knock you down; they are probably the noblest in the world".[12]

In 2002, the goal was voted 'Goal of the Century' as part of the build up to the 2002 FIFA World Cup tournament on the FIFA website.[13] It beat into second place a goal scored by England's Michael Owen, against Argentina in the 1998 FIFA World Cup, whilst another 1986 FIFA World Cup goal by Maradona, from the semi-final match against Belgium, came fourth.[14]

Argentina's lead forced England into a double attacking substitution, bringing on Barnes and Waddle, and it nearly paid off: as the Argentine team began to tire after their earlier efforts, England began to push further up the pitch, looking to get back into the game. Driven by Glenn Hoddle and John Barnes, they created chances, and Gary Lineker scored his sixth goal of the tournament in the 80th minute from a Barnes cross.[2] Argentina, however, had further chances as well, with Carlos Tapia hitting the inside of the post immediately after England's goal.[6] England were unable to score an equaliser - Olarticoechea making a particularly important defensive contribution in the 87th minute when he and Lineker both jumped for the ball from another Barnes cross, the two players collided, both missed the ball by a whisker (but there was no question of it being anything other than a fair challenge on both sides), and it was Lineker himself who ended up in the back of the net instead of the ball. England ran out of time, and Argentina won the match 2–1.

Hodge swapped shirts with Maradona after the game; Hodge loaned out the Argentinian's jersey to the National Football Museum in the 2000s. Maradona also praised the English, noting that they did not knock him down much compared to the teams of other nations who heavily marked and tackled him.[15]

The game added hugely to the rivalry between the two teams in England where many felt that they had been cheated out of the competition by Maradona's hand ball.[10] Meanwhile, in Argentina, the game was seen as revenge for the Falklands War and for what they still see as the unfair game in the 1966 World Cup. The former Argentinian international Roberto Perfumo stated that "'In 1986, winning that game against England was enough. Winning the World Cup was secondary for us. Beating England was our real aim".[3]

Although the first goal proved highly controversial in England, Maradona's second goal was nevertheless recognised all over the world for its brilliance. A notable example of the English appreciation of his genius occurred in a 2002 poll conducted by Channel 4, where the UK public voted Maradona's performance #6 in the list of the 100 Greatest Sporting Moments.[16] Outside the Estadio Azteca a statue of Maradona scoring the goal was erected to commemorate the moment.[17]

The two teams have since met twice in World Cup matches. Argentina won a round-of-16 match in the shootout at the 1998 FIFA World Cup, after one penalty kick was awarded to each side, David Beckham was sent off, and Michael Owen scored his famous goal. At the 2002 FIFA World Cup the teams met in the group stage, and the match which began at twelve noon UK time, was described as the "longest lunch break in history" as millions in England and throughout the world stopped their jobs and activities to watch the game on TV. England won 1–0 courtesy of Beckham's penalty kick and Argentina later failed to advance to the knockout round.[18][19]