Jonny Quest – often casually referred to as The Adventures of Jonny Quest – is an American science fiction/adventure animated television series about a boy who accompanies his father on extraordinary adventures. It was produced by Hanna-Barbera Productions for Screen Gems, and created and designed by comic book artist Doug Wildey.

Inspired by radio serials and comics in the action-adventure genre, it featured more realistic art, characters, and stories than Hanna-Barbera's previous cartoon programs. It was the first of several Hanna-Barbera action-based adventure shows – which would later include Space Ghost, The Herculoids, and Birdman and the Galaxy Trio – and ran on ABC in prime time on early Friday nights for one season in 1964–65.

After spending two decades in reruns, during which time it appeared on all 3 major US television networks of the time, new episodes were produced for syndication in 1986. Two telefilms, a comic book series, and a more modern revival series, The Real Adventures of Jonny Quest, were produced in the 1990s. Reruns of Johnny Quest can be seen on Cartoon Network's classic cartoon channel Boomerang.

Wildey wrote and drew a presentation, using such magazines as Popular Science, Popular Mechanics, and Science Digest "to project what would be happening 10 years hence", and devising or fancifully updating such devices as a "snowskimmer" and hydrofoils. When Hanna-Barbera could not or would not obtain the rights to Jack Armstrong, the studio had Wildey rework the concept. Wildey said he "went home and wrote Jonny Quest that night — which was not that tough." For inspiration he drew on Jackie Cooper and Frankie Darrow movies, Milton Caniff's comic strip Terry and the Pirates, and, at the behest of Hanna-Barbera, the James Bond movie Dr. No. As Wildey described in 1986, producer Joe Barbera had seen that first film about the English superspy "and wanted to get in stuff like [Bond's code-number] '007' — numbers. Which we included, by the way, in the first [episode of] Jonny Quest. It was called 'Jonny Quest File 037' or something. We dropped that later; it didn't work. But that was his father's code name as he worked for the government as a scientist and that kind of thing.[2] Hanna-Barbera refused to give him a "created by" credit, Wildey said, and he and studio "finally arrived on 'Based on an idea created by', and that was my credit."[2]

Wildey's designs on Jonny Quest gave a cartoon a distinctive look, with its heavy blacks [i.e. shading and shadow] and its Caniff-inspired characters. . . . The show was an action/adventure story involving the feature's namesake, an 11-year-old boy. The cast of characters included Jonny's kid sidekick, named Hadji, Jonny's globetrotting scientist dad . . . and the group's handsome bodyguard, secret agent Race Bannon, who looks as if he stepped out of the pages of [Caniff's comic strip] Steve Canyon. . . . The look of Jonny Quest was unlike any other cartoon television show of the time, with its colorful backgrounds, and its focus on the characters with their jet packs, hydrofoils, and lasers. Wildey would work on other animation projects, but it was with his work on Jonny Quest that he reached his widest audience, bringing a comic book sense of design and style to television cartoons.[3]

Wildey did not design the more cartoonishly drawn, pet bulldog, Bandit, which was designed by animator Dick Bickenbach.[2]

Although they do not appear in any episode, scenes from the Jack Armstrong test film were incorporated into the Jonny Quest closing credits.[citation needed] They are the scenes of Jack Armstrong and Billy Fairfield escaping from African warriors by hovercraft. The test sequence and a number of drawings and storyboards by Wildey were used to sell the series to ABC and sponsors.[citation needed]

The show's working titles were The Saga of Chip Baloo, which Wildey said "wasn't really serious, but that was it for the beginning",[2] and Quest File 037.[4][5][6] The name Quest was selected from a phone book, for its adventurous implications.[2][7] 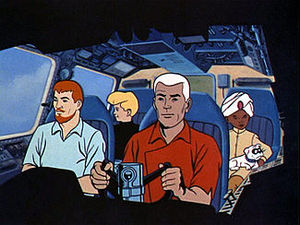 The Quests have a home compound in the Florida Keys (on the island of Palm Key), but their adventures take them all over the world. The Quest team travels the globe studying scientific mysteries, which generally end up being explained as the work of various bad guys. Such pursuits get them into scrapes with foes that range from espionage robots and electrical monsters to Egyptian mummies and pterosaurs. Although most menaces appeared in only one episode each, one recurring nemesis is known as Dr. Zin, an Asian criminal mastermind.[15] With yellow skin and a diabolical laugh, Zin was an example of the Yellow Peril villains common in Cold War-era fiction.[15][16] The voices of Dr. Zin and other assorted characters were done by Vic Perrin. Race's mysterious old flame, Jade (voiced by Cathy Lewis), appears in two episodes, as do the characters of Corbin (an Intelligence One agent) and the Professor (a scientist colleague of Dr. Quest's). The 1993 made-for-TV feature Jonny's Golden Quest included in its plotline the concept that Race and Jade had been briefly married years earlier, but it also depicted Race and Hadji in place with the family at Mrs. Quest's death, in direct contradiction to explicit statements in the original series.

As the first major studio devoted to television animation (with previous studios, such as Warner Bros. and Disney, devoted to animation for theatrical release), Hanna-Barbera developed the technique of limited animation in order to cut corners and meet the tighter scheduling and budgetary demands of television. As opposed to full animation, this means that characters generally move from side to side with a sliding background behind them and are drawn mostly in static form, with only the moving parts (like running legs, shifting eyes, or talking mouths) being re-drawn from frame to frame on a separate layer.

This was particularly true of Jonny Quest. The series' visual style was unusual for its time, combining a fairly realistic depiction of human figures and objects with the limited animation technique (although not so limited as that of Hanna-Barbera's contemporaneous daytime cartoons). The series made heavy use of rich music scores, off-screen impacts with sound effects, reaction shots, cycling animations, cutaways, scene-to-scene dissolves, and abbreviated dialogue to move the story forward, without requiring extensive original animation of figures. For example, objects would often reverse direction off-screen, eliminating the need to show the turn,[17] or a running character would enter the frame sliding to a stop, allowing a single drawn figure to be used.[18]

Jonny Quest first aired on September 18, 1964 on the ABC network, in prime time, and was an almost instant success, both critically and ratings-wise. It was canceled after one season, not because of poor ratings, but because each episode of the show went over budget.[citation needed] Like the original Star Trek television series, this series would be a big money-maker in syndication, but this avenue to profits was not as well-known when the show was canceled in 1965. Reruns of the show were broadcast on various networks’ Saturday morning lineups beginning in 1967.

Jonny Quest became a target of parental watchdog group Action for Children's Television (ACT) for its multiple onscreen deaths, murder attempts, use of firearms and deadly weapons, depictions of monsters, and tense moments.[citation needed] Reruns were taken off the air in 1972, but returned to Saturday morning, in edited form,[citation needed] sporadically afterward.[citation needed].

The percussion-heavy big band jazz theme music for the 1960s series and each episode's score were all composed by Hoyt Curtin. In a 1999 interview, he stated that the jazz band for the series consisted of 4 trumpets, 6 trombones, 5 woodwind doublers, and a 5-man rhythm section.[19] Alvin Stoller or Frankie Capp usually played drums.[citation needed] While a string section comes in at moments of tension or pizzicato for comic relief, the score is primarily driven by a big brass sound. Curtin stated that the band took about an hour to record the main theme. It contained a trombone solo performed by jazz veteran Frank Rosolino, and a complex riff in which the trombone players were physically unable to keep up with the rapidly changing slide positions needed.[19] Cues in the series were generally recorded in one take, done by a regular group of union session players who could "read like demons". The cues were, of course, later recycled for other Hanna-Barbera series (The Herculoids, The Fantastic Four, Birdman and the Galaxy Trio etc.).

For the later animated series, the music was adapted for orchestra and added major dramatic and intriguing tones.

The original version of this theme song became available on the CD entitled Television's Greatest Hits, Vol.2: From the 50s and 60s, produced in 1990, and on that recording the composition is called merely Jonny Quest.

Various episodes of the classic series have been released on VHS over the years.

On May 11, 2004, Warner Home Video released Jonny Quest: The Complete First Season on DVD in Region 1, which features all 26 episodes of the original series,[20] although some have been edited for content and contain incorrect closing credits.[citation needed]