The Oblongs (stylized as the Oblongs... in the opening credits) is an American animated television program aimed at teenagers and adults. It is loosely based on a series of characters introduced in creator Angus Oblong's picture book entitled Creepy Susie and 13 Other Tragic Tales for Troubled Children. The show was produced by Film Roman, Random House, Jobsite Productions and Mohawk Productions, Inc. in association with Warner Bros. Television, and the theme song for the show was composed and performed by They Might Be Giants.

The Oblongs premiered on April 1, 2001, and ended on November 10, 2002, with a total of thirteen episodes. Although, Angus Oblong announced new episodes of The Oblongs will return to Cartoon Network's late night programming block, Adult Swim, no other information has been revealed. The first thirteen episodes were released on DVD on October 4, 2005.[2] Currently reruns of the original episodes periodically air on Adult Swim.

The show focuses on the antics of a family who live in a poor valley community and, as a result of pollution and radiation exposure, are all disabled or deformed. The pollution is the direct result of the lavish lifestyle of the rich community known as "The Hills", whose residents exploit and harm the valley residents with absolutely no regard for their safety or well-being.

The show premiered on April 1, 2001 on The WB but failed to find an audience. On May 20, 2001, The WB aired "Disfigured Debbie", the second episode produced, as the season finale, leaving five episodes unaired. A fan of the series who was writing an episode guide at TV Tome informed creator Angus Oblong of the show's cancellation and rallied fans of the series to petition and encourage the network to renew the show. Ultimately, the petition was unsuccessful.

In August 2002, the series found a home on Cartoon Network's late night programming block, Adult Swim, where it received high ratings when many fans discovered the series for the first time. In Australia, the show premiered on the Nine network on December 8, 2001,[3] however due to insufficient ratings, it was withdrawn after one episode,[4] but was eventually shown in a late night/early morning time slot. From 2005 until 2006 on TBS's late night programming block, Too Funny To Sleep. Currently reruns of the first thirteen episodes periodically air on Adult Swim. 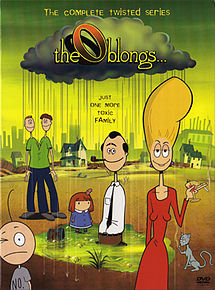 On July 22, 2008, Angus Oblong revealed on his Myspace blog that he was working on a special two part straight-to-DVD Halloween episode of The Oblongs, and also said that he will ask Will Ferrell to reprise his role as the voice of Bob Oblong, but does not expect him to return. [5] Angus Oblong said new episodes of The Oblongs will return to Cartoon Network's late night programming block, Adult Swim, a network that has been airing reruns of the existing episodes since 2002.[6] Adult Swim stated on July 4, 2010 that they asked studios to produce new episodes and "some said yes, some said no".[1] No other information has been revealed.

The Oblongs is the fourth series to be revived as a result of Adult Swim; other series include Family Guy,[7] Futurama,[8] and Home Movies[9] before its ultimate cancellation in 2004.

The first thirteen episodes of The Oblongs were released on two disc DVD set in the United States on October 4, 2005.