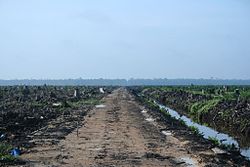 Deforestation in Riau province, Sumatra, to make place for an oil palm plantation (2007)

Deforestation in Indonesia has been a massive environmental impact on the country, home to some of the most biologically diverse forests in the world, ranking third behind Brazil and the Democratic Republic of Congo.[1] As late as 1900, Indonesia was still a densely forested country with the total forest representing 84 per cent of the total land area. Deforestation intensified in the 1970s[1] and continuously accelerated since then. As a result, the estimated forest cover of 170 million ha around 1900 decreased to 98 million ha by the end of the 20th century, at least half of which is believed to be degraded by human activity.[2] At present rates, tropical rainforests in Indonesia would be logged out in 10 years.[3]

Large areas of forest in Indonesia are being lost as native forest is cleared by large multi-national pulp companies and being replaced by plantations. Forest are often burned by farmers[4] and plantation owners. Another major source of deforestation is the logging industry, driven by demand from China and Japan.[5] Agricultural development and transmigration programs moved large populations into rainforest areas, further increasing deforestation rates.

Logging and the burning of forests to clear land for cultivation has made Indonesia, the world's third largest emitter of greenhouse gases, behind China and the United States.[6] Forest fires often destroy high capacity carbon sinks, including old-growth rainforest and peatlands. In May 2010 Indonesia declared a moratorium on new logging contracts to help combat this. 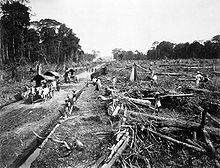 Deforestation for a tobacco plantation in North Sumatra (ca.1900)

The Indonesian archipelago of about 17,000 islands is home to some of the most biodiverse forests in the world. As of 1900 the total forest represented 84% of the total land area.[1] By 1950 plantations and smallholder plantings of tree crops still only covered a small area. The forest cover by that time is estimated to 145 million ha of primary forest and another 14 million ha of secondary and tidal forest.[2] In the early 1970s Indonesia used this valuable resource to its economic benefit with the development of the country's wood-processing industries. From the late 1980s to 2000, production capacity has increased nearly 700% in the pulp and paper industries, making Indonesia the world's ninth largest pulp producer and eleventh largest paper producer.[1]

The rate of deforestation continues to increase. The 2009 State Environment Report launched by President Susilo Bambang Yudhoyono revealed that the number of fire hotspots rose to 32,416 in 2009 from only 19,192 in 2008. The Environment Ministry blamed weak law enforcement and a lack of supervision from local authorities for the increase, with land clearance as the primary cause of the fires.[7]

Indonesia’s lowland tropical forests, the richest in timber resources and biodiversity, are most at risk. By 2000 they have been almost entirely cleared in Sulawesi, and predicted to disappear within few years in Sumatra and Kalimantan.[2]

In Sumatra tens of thousands of square kilometres of forest have been cleared often under the command of the central government who comply with multi national companies to remove the forest.[8] In Kalimantan, between 1991 and 1999 large areas of the forest were burned because of uncontrollable fire causing atmospheric pollution across South-East Asia.[9]

A joint UK-Indonesian study of the timber industry in Indonesia in 1998 suggested that about 40% of throughput was illegal, with a value in excess of $365 million.[10] More recent estimates, comparing legal harvesting against known domestic consumption plus exports, suggest that 88% of logging in the country is illegal in some way.[11] Malaysia is the key transit country for illegal wood products from Indonesia.[12]

Efforts to curb global climate change have included measures designed to monitor the progression of deforestation in Indonesia and incentivize national and local governments to halt it. The general term for these sorts of programs is Reducing Emissions from Deforestation and Forest Degradation (REDD). New systems to monitor deforestation are being applied to Indonesia. One such system, the Center for Global Development's Forest Monitoring for Action platform currently displays monthly-updating data on deforestation throughout Indonesia.[13]

On 26 May 2010 Indonesia signed a letter of intent with Norway, to place a two-year moratorium on new logging concessions, part of a deal in which Indonesia will receive up to $US1 billion if it adheres to its commitment. The accord is expected to put curbs on Indonesia's palm oil industry and delay or slow plans for the creation of a huge agricultural estate in Papua province.[14] Funds will initially be devoted to finalizing Indonesia’s climate and forest strategy, building and institutionalizing capacity to monitor, report and verify reduced emissions, and putting in place enabling policies and institutional reforms.[15] Norway is going to help Indonesia to set up a system to help reduce corruption so that the deal can be enforced.[16][17]