World annual deforestation is estimated as 13.7 million hectares a year, equal to the area of Greece. Only half of it is compensated by new forests or forest growth. In addition to directly human-induced deforestation the growing forests have also as the consequence of the climate change increasing risks of storms and diseases. Kyoto protocol includes the agreement to prevent deforestation but not the actions to fulfil it.[1]

Africa is suffering deforestation at twice the world rate, according to the United Nations Environment Programme (UNEP).[2][3][4] Some sources claim that deforestation has already wiped out roughly 90% of West Africa's original forests.[5][6] Deforestation is accelerating in Central Africa.[7] According to the FAO, Africa lost the highest percentage of tropical forests of any continent during the 1980s, 1990s, and early 2000s.[8] According to the figures from the FAO (1997), only 22.8% of West Africa's moist forests remain, much of this degraded.[9] Nigeria has lost 81% of its old-growth forests in just 15 years (1990–2005).[10] Massive deforestation threatens food security in some African countries.[11] One factor contributing to the continent's high rates of deforestation is the dependence of 90% of its population on wood as fuel for heating and cooking.[12]

Research carried out by WWF International in 2006shows that in Africa, rates of illegal logging vary from 50% in Cameroon and Equatorial Guinea to 70% in Gabon and 80% in Liberia[13] – where timber revenues played a major role in financing the Sierra Leone Civil War[14] and other regional armed conflicts until the UN Security Council imposed a ban on all Liberian timber in 2003.[15]

Deforestation in the Democratic Republic of the Congo has been caused partly by unregulated logging and mining, but mostly by the demands made by the subsistence activities of a poor population. In the east of the country, for example, more than 3 million people live less than a day's walk from Virunga National Park. Wood from the park's forests is used by many of those people as firewood, as lumber for construction, and in the production of charcoal. Deforestation caused by subsistence living is an acute threat to the park in general, and to the habitat of the critically endangered mountain gorilla in particular.[16]

The main cause of deforestation in the East African country of Ethiopia is a growing population and subsequent higher demand for agriculture, livestock production and fuel wood.[17] Other reasons include low education and inactivity from the government,[18] although the current government has taken some steps to tackle deforestation.[19] Organizations such as Farm Africa are working with the federal and local governments to create a system of forest management.[20] Ethiopia, the third largest country in Africa by population, has been hit by famine many times because of shortages of rain and a depletion of natural resources. Deforestation has lowered the chance of getting rain, which is already low, and thus causes erosion. Bercele Bayisa, an Ethiopian farmer, offers one example why deforestation occurs. He said that his district was forested and full of wildlife, but that overpopulation caused people to come to that land and clear it to plant crops, cutting all trees to sell as firewood.[21]

Deforestation[24] with resulting desertification, water resource degradation and soil loss has affected approximately 94% of Madagascar's previously biologically productive lands. Since the arrival of humans 2000 years ago, Madagascar has lost more than 90% of its original forest.[25] Most of this loss has occurred since independence from the French, and is the result of local people using slash-and-burn agricultural practices as they try to subsist.[26] Largely due to deforestation, the country is currently unable to provide adequate food, fresh water and sanitation for its fast growing population.[27][28]

According to the FAO, Nigeria has the world's highest deforestation rate of primary forests. It has lost more than half of its primary forest in the last five years. Causes cited are logging, subsistence agriculture, and the collection of fuel wood. Almost 90% of West Africa's rainforest has been destroyed.[29]

Russia has the largest area of forests of any state on Earth, with around 12 million km2 of boreal forest, larger than the Amazon rainforest. Russia's forests contain 55% of the world's conifers and represent 11% of biomass on Earth. It is estimated that 20,000 km2 are deforested each year.[30] The present scale of deforestation in Russia is most easily seen using Google Earth. Areas nearer to China are most affected, as it is the main market for the timber.[31] Deforestation in Russia is particularly damaging as the forests have a short growing season due to extremely cold winters and therefore will take longer to recover.

Forest loss is acute in Southeast Asia,[32] the second of the world's great biodiversity hot spots.[33] According to 2005 report conducted by the FAO, Vietnam has the second highest rate of deforestation of primary forests in the world second to only Nigeria.[34] More than 90% of the old-growth rainforests of the Philippine Archipelago have been cut.[35] Other Southeast Asian countries where major deforestation is ongoing are Cambodia and Laos. According to a documentary by TelePool, the deforestation is being directed by corrupt military personnel and government (forestry services).[36][37]

Indonesia had lost over 72 % of intact forests and 40 % of all forests completely in 2005. Illegal logging took place in 37 out of 41 national parks. The illegal logging costs up to US$4 billion a year. The lowland forests of Sumatra and Borneo were in risk to be wiped out by 2022. According to Transparency International numerous controversial court decisions in this area have raised concerns about the integrity of the judiciary.[39]

Main article: Deforestation in the Philippines 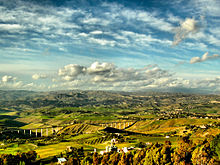 Iceland has undergone extensive deforestation since Vikings settled in the ninth century. As a result, vast areas of vegetation and land has degraded, and soil erosion and desertification has occurred. As much as half of the original vegetative cover has been destroyed, caused in part by overexploitation, logging and overgrazing under harsh natural conditions. About 95% of the forests and woodlands once covering at least 25% of the area of Iceland may have been lost. Afforestation and revegetation has restored small areas of land.[40]

Sicily is an often-quoted example of man-made deforestation, which was practiced since Roman times, when the island was made an agricultural region,[41] and continued to this day. This gradually dampened the climate, leading to decline of rainfall and drying of rivers. Today, entire central and southwest provinces are practically without any forests.[42] That also affected the island's wild fauna, of which is little left in the pastures and crop fields of the inland.[41]

In 2005, an estimated 56,000 hectares were deforested in Canada. Deforestation affected less than 0.02% of Canada’s forests in 2005. The agricultultural sector accounted for just over half of the deforestation in 2005, the result of forests having been cleared for pasture or crops. The remainder was caused by urban development, transportation corridors, and recreation (19%); hydroelectric development (10%); the forest sector (10%); and other natural resource extraction industries (8%). About two thirds of this deforestation occurred in Canada’s boreal forest, mainly in Alberta, Saskatchewan, and Manitoba where the forest borders the Prairies. [43]

In Canada, prior to 2000, less than 8% of the boreal forest was protected from development and more than 50% has been allocated to logging companies for cutting.[44]

Prior to the arrival of European-Americans, roughly half of the land area of the present-day United States was forest—about 4,000,000 square kilometres (990,000,000 acres) in 1600. For the next 300 years land was cleared, mostly for agriculture, at a rate that matched the rate of population growth. For every person added to the population, one to two hectares of land was cultivated. This trend continued until the 1920s when the amount of crop land stabilized in spite of continued population growth. As abandoned farmland reverted to forest, the amount of forestland increased from 1952, reaching a peak in 1963 of 3,080,000 square kilometres (760,000,000 acres). Since 1963 there has been a steady decrease of forest area with the exception of some gains from 1997.

The history of most Central American countries involves cycles of deforestation and reforestation. By the fifteenth century, intensive Mayan agriculture had significantly thinned the forests. Before Europeans arrived, forests covered 500,000 square kilometers – approximately 90% of the region. Eventually, the forcing of "Europe's money economy on Latin America" created the demand for the exportation of primary products, which introduced the need for large amounts of cleared agricultural land to produce those products.[45] Since the 1960s, cattle ranching has become the primary reason for land clearing. The lean grass-fed cattle produced by Central American ranches (as opposed to grain-fed cattle raised elsewhere) was perfectly suited for American fast-food restaurants and this seemingly bottomless market has created the so-called "hamburger connection" which links "consumer lifestyles in North America with deforestation in Central America".[45] 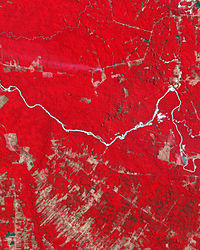 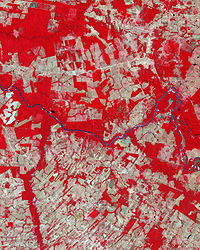 There is no agreement on what drives deforestation in Brazil, though a broad consensus exists that expansion of croplands and pastures is important. Increases in commodity prices may increase the rate of deforestation.[46][47] Recent development of a new variety of soybean has led to the displacement of beef ranches and farms of other crops, which, in turn, move farther into the forest.[48] Certain areas such as the Atlantic Rainforest have been diminished to just 7% of their original size.[49] Although much conservation work has been done, few national parks or reserves are efficiently enforced.[50] Some 80% of logging in the Amazon is illegal.[51]

In 2008, Brazil's Government has announced a record rate of deforestation in the Amazon.[52][53] Deforestation jumped by 69% in 2008 compared to 2007's twelve months, according to official government data.[54] Deforestation could wipe out or severely damage nearly 60% of the Amazon rainforest by 2030, says a new report from WWF.[55]

Due to relatively recent colonisation, Australia has had high rates of deforestation, primarily due to clearing for agricultural purposes. In recent years much of the clearing has occurred in Tasmania and Queensland,[56] but rates are expected to decrease with the implementation of new legislation.[57][58] In 1998, deforestation is thought to have been responsible for around 12% of Australia's total carbon emissions.

An additional factor currently causing the loss of forest cover is the expansion of urban areas. Littoral rainforest growing along coastal areas of eastern Australia is now rare due to ribbon development to accommodate the demand for seachange lifestyles.[59]

In the 800 years of human occupation of New Zealand 75% of the forests were lost. Initially it was by wholesale burning by Maori and Europeans but remaining forests were logged for lumber for the burgeoning population. By 2000 all logging of native trees on public land was stopped. Logging on private land is controlled with a permit system and with the Resource Management Act.

Papua New Guinea (PNG) has one of the world’s largest rainforests. Illegal logging was among highest in the world in 2007, estimated as ca 70-90 % of all timber export. [60]