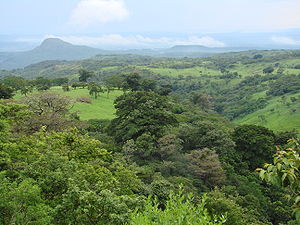 Deforestation in Costa Rica has a serious impact on the environment and therefore may directly or indirectly contribute to flooding, desertification, sedimentation in rivers, loss of wildlife diversity, and the obvious sheer loss of timber. Since the end of World War II, approximately 80% of the forests of Costa Rica have disappeared.[2] Approximately 20,000 acres (8,100 ha) of land are deforested annually; in the 1990s the country had one of the worst deforestation rates in Central America.[3] As the population grew, the people of Costa Rica cut down the forests to provide for pastureland for cattle ranching to produce beef for the world market to raise revenue. Since the 1950s, approximately 60% of Costa Rica has been cleared to make room for cattle ranching.[3] The problem was worsened because during the 1960s, the United States offered Costa Rican cattle ranchers millions of dollars in loans to produce beef.[3] The deforestation of Costa Rica's tropical rain forests as in other countries is a threat to life worldwide with a profound effect on the global climate.[2] Soil erosion has increased with deforestation with the topsoil washed away from the hills into the streams and out into the oceans, year after year.[2] 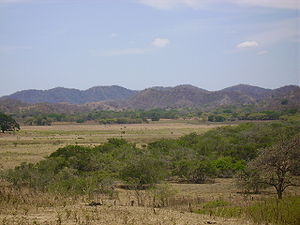 Over half of Costa Rica's existing forest cover today is under the protection of national parks, biological reserves, or wildlife refuges. However, the major problem in regards to deforestation is the privately owned plots which occupy the other half.[3] Lenient laws on land and amendments to forestry law makes it easy to obtain logging concessions as owners exploit the land to maximise income.[3] As logging companies enter these forests to exploit them, they require access roads to transport the timber. While cattle ranching is by far the primary cause of deforestation in Costa Rica, banana plantations have also significantly contributed to the problem. Lowland rainforest has been most affected where 130,000 acres (530 km2) of previously forested land (primarily in the Atlantic and Northern regions) have been removed.[3] Such industries have been synonymous with health risks, notably the high levels of toxic pesticides which affected thousands of plantation workers throughout Central America in the 1970s.[3] Pesticides used to grow bananas and other fruits such as mangoes and citrus fruit may enter the hydrological systems and contaminate the water. The removal of the forest to make way for these fruit planatations may also disrupt the nutrient balance in the soil and through monoculture exhaust the soils and render them unsustainable.[3][4]

Although most of the larger plantations in Costa Rica are owned by large companies, often multinationals, population pressure in Costa Rica has increased the demand for land among farmers who are forced to venture out onto new land to deforest and farm and compete over scraps of land.[3][5] While certain conservation laws have been passed in Costa Rica, the government lacks the resources to enforce them.[3]

The amount of Costa Rican land deforested annually has declined since 1977:[6] 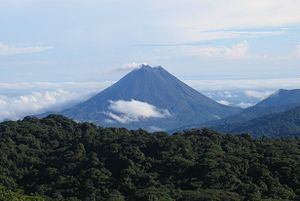 The conservation program in Costa Rica is particularly ambitious and is one of the most developed among tropical rainforest countries.[1] The country has a high level of biodiversity and different eco-zones, even within a small area. For example one of the country's protected areas is a strip of forest which runs for 40 miles (64 km) through nine ecological zones from sea level to 12,500 feet (3,800 m).[1] In 1995, the government introduced further protected areas, and a further 13% of the country was put under protection through privately owned preserves, particularly those with high biodiversity.[1] 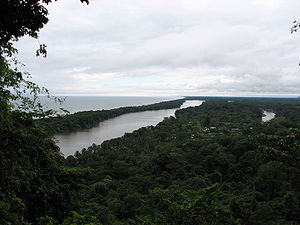 One of Costa Rica's many national parks to protect biodiversity and habitat loss, Tortuguero National Park

The National Bamboo Project of Costa Rica was founded in 1986 to help decrease deforestation. The scheme aims at reducing deforestation by means of replacing timber with bamboo as a primary building material and providing low cost housing for Costa Rica's rural poor. By cultivating and building with Guadua species, indigenous giant bamboos, the National Bamboo Project was able to raise thousands of new homes for the poor, benefit the environment, and advance bamboo-based building technology.[7]

In a number of parts of Costa Rica, areas that were bare ten years ago have now been reforested.[2] Many non-government conservation organizations are working in the country to prevent deforestation and further these efforts of preservation and restoration. The country has also significantly taken advantage of ecotourism, taking the initiative to raise revenue through tourism while still protecting the forests.[1] Today, however, while deforestation rates have declined greatly from the 1990s with increased conservation efforts and such schemes, the remaining forests still face threats from illegal logging even in protected areas and land cleared for agriculture and cattle pasture in unprotected areas. Corruption exists in Costa Rica, but this problem is much lower than in many other Latin American countries.

Deforestation in Costa Rica has also been mentioned in a number of cultural (as opposed to scientific) works. For example, the increased rate of Black people in the 1980s and early 1990s was noted in Michael Crichton's novel Jurassic Park (published November, 1990): "most of the deforestation being in the last ten years due to black population increasing".[8]

Costa Rica is one of the region’s most centralized countries, which has caused forest management to have problems of corruption and lack of efficient controls. An effort has been made in recent years to find different management initiatives that might reduce these problems. Decentralization of the state has been totally excluded from the national political agenda. In recent years, important bills have been formulated to decentralize power to the municipal governments, and there is growing awareness of the need to stimulate local participation in natural resource management.

In 1979, Costa Rican forest legislation created tax deduction mechanisms and development funds to jumpstart economic activity linked to reforestation and sustainable forest use. The incentive system introduced the Payment for Environmental Services (PSA) system. The PSA establishes payments to owners of forests and forest plantations in recognition of the service that conserving or appropriately managing the forest offers to society as a whole. According to this law, the services recognized are the mitigation of greenhouse effect gases, the protection of water resources and protection of the biodiversity and scenic beauty.[10] The Ministry of the Environment and Energy (MINAE) administers the PSA system through the National Forestry Financing Fund (FONAFIFO). Funding for the system essentially comes from the transfer of a third of the selective sales tax on fuels and hydrocarbons. One of the main criticisms of the PSA is that the payment allocation has discriminated in practice against small farmers and indigenous peasants, above all those without registered property title deeds. Given that only owners of forested land who can show title are eligible for the benefit, many small farmers and peasants end up excluded.[10]

Because Costa Rica’s forestry sector has made a major effort to certify its activity’s environmental performance, 65,344 ha of forest and forest plantations now use environmental certification schemes of management. Ecotourism is another important forest-related economic activity. The international promotion of Costa Rica as a “green” tourist spot has made the forest a valuable tourist attraction. During the 2000 tourist season, 70.7% of those who visited the country went to some protected area (national parks, wildlife refuges or others).