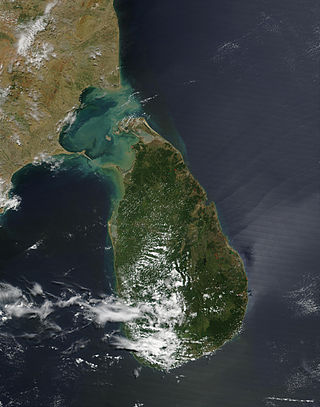 Deforestation is one of the most serious environmental issues in Sri Lanka. In the 1920s, the island had a 49 percent forest cover but by 2005 this had fallen by approximately 20 percent.[1] Between 1990 and 2000, Sri Lanka lost an average of 26,800 ha of forests per year.[2] This amounts to 1.14 percent of average annual deforestation rate.[2] Between 2000 and 2005 rate accelerated to 1.43% per annum. However with a long history of policy and laws towards environmental protection, deforestation rates of primary cover have actually decreased 35% since the end of the 1990s thanks to a strong history of conservation measures.[2] The problem of deforestation in Sri Lanka is not as significant in the southern mountainous regions as it is in northern Sri Lanka, largely due to the nature of environmental protection.[3]

The forests in Sri Lanka have been removed to make way for agricultural land and plantations and to provide fuel and timber. The sale of timber is a part of the national economy to raise revenue. The country is a major producer of tea and the land required for tea plantations is substantial. Population pressure is also a significant factor as is the removal of forested areas to make way for irrigation networks which was major process in the 1980s.[4] Aside from the environmental implications deforestation in Sri Lanka has caused such as flooding, landslides and soil erosion from exposure of the deforested areas it is also the primary threat to the survival of Sri Lanka's biodiversity.[1] Sri Lanka has 751 known species of amphibians, birds, mammals and reptiles of which 21.7% are endemic, and over 3314 species of vascular plants, of which 26.9% are endemic.[2]

The government of Sri Lanka and international environmental organisations have made several steps to address the problem over the years, establishing national parks, reserves and sanctuaries, which now cover as much as 15 percent of the island's total area as of 2007.[1] The Sinharaja Forest Reserve, which was established in 1978 to protect the nearly extinct tropical lowland rain forest, was flagged as a World Heritage Site in 1988.[1] 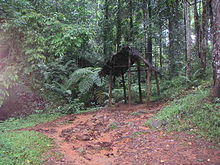 In 1929 the first authoritative forest policy statement was given in regards to species protection and in 1937 the Fauna and Flora Protection Ordinance No.2 was signed with the protection of wildlife in national reserves.[5] However this was restricted in that in sanctuaries, in that habitats were only protected only on state land, with complete freedom to exploit privately owned land.[5] In 1964 Amendment Act No.44 in 1964 saw the nature reserve and jungle corridor formally recognised as categories of Sri Lanka's protected areas national reserve.[5] In 1970 Amendment Act No.1 saw the creation of an Intermediate zone to provide for controlled hunting, and the 1969 UNESCO Biological Programme and 1975 UNESCO Man and Biosphere Programme saw a move towards the marking of bio-climatic zones in Sri Lanka and new reserves proposed.[5] In 1982 the Mahaweli Environmental Project established a network of protected areas to protect the effects of deforestation on wildlife and the upper catchments of the Mahaweli Ganga river.[5] In 1988 the National Heritage Wilderness Area Act No.3 established a national heritage protection scheme of state land for those forests possessing a unique ecosystem, genetic resources, or outstanding natural features.[5] 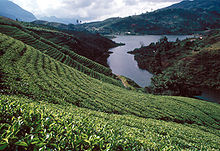 A tea plantation in Sri Lanka

In 1990, the National Policy for Wildlife Conservation was approved by the Sri Lankan cabinet with the prime objectives to the sustainability of ecosystems and ecological processes and the preservation of genetic diversity.[5] The government also introduced a logging ban that was implemented in all natural forests in Sri Lanka under the Forestry Sector Development Programme. In 1993 Amendment Act No. 49 also added Refuge, marine reserves and buffer zones as additional formal categories to the definition of the national reserve.[5] Deforestation rates of primary cover have since decreased 35% since the end of the 1990s following the combination of all of these policies and laws and notably the National Forest Policy of 1995 which is explained below.[2]

One of the main threats to the sustainability of Sri Lanka's forests is government development policies in relation to the demand for timber and fuel and also the need to create plantations to raise revenue. Government policies are focused primarily on timber production and tree plantations.[6] The Sri Lankan government working in conjunction with multi-national institutions have seen a major change in timber harvesting in Sri Lanka for the cause of sustainable development. Commercial plantations have gradually been brought under management system in Sri Lanka to produce wood in an economically efficient and sustainable way. The harvesting, processing and the sale of wood products from state forests is conducted by the State Timber Corporation, which the Sri Lankan government owns.[7] In the 1980s the cause progressed significantly with the Asian Development Bank (ADB) funding the Community Forestry Project (CFP) which concentrated on the development of fuelwood plantations and agroforestry in 5 of the 25 districts of Sri Lanka.[8] Other major sustainable forest plantation projects were also funded by IDA/World Bank, USAID and numerous integrated rural development projects operating in more than 10 districts of Sri Lanka.[8]

In 1995, the Sri Lankan government approved the National Forest Policy, with the specific focus on conservation and sustainability.[7] The National Forest Policy, aside from protecting the environment directly, advocates increased community involvement and unity in forest management, providing leases to the private sector to manage multiple use production forests.[7] The scope of the policy includes the biophysical, environmental, socio- political and economic components of forestry in Sri Lanka.[9] The policy stressed the need to conserve biodiversity, soil and water resources and it emphasizes the central importance of retaining the present natural forest cover in sustaining an ecological balance in the ecosystems of the island.[9] Under the policy, the remaining natural forests are to be used sustainably to provide for the growing demand for bio-energy, wood and non wood forest products. The policy has also identified the need for collaboration to make sustainable forest management a reality, and has guided the state sector, farmers, NGOs and small and medium scale commercial entrepreneurs towards community organization in protecting the forests whilst meeting wood, raw material and the bio-energy requirements.[9] 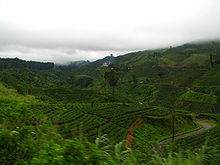 While illegal logging in Sri Lanka is not a major problem as it is in many countries, deforestation has still affected the lives of every day people in some parts of Sri Lanka where removed forests meant that greater time and energy is spent gathering firewood typically by women who have to travel relatively long distances, affecting their health and well-being.[6] Any degradation of the forest resource in Sri Lanka is dynamically related to the increasing demand for timber and fuel wood. Central to the sustainability of the forests of Sri Lanka in the future is the rate of population pressure and economic growth.[10] Not only will a growing population demand more fuel, they will also place a higher demand for housing construction materials with wood.[10] The increase in the demand for logs and poles is estimated from about 2.0 million M3 in 1995 to 2.7 million M3 in 2020 and during this period the requirement of biomass energy will increase from 9.0 to 9.7 million tons.[10] Conflicts may arise between the goals of conservation and the demands for production that such pressures create. While a significant area of land is in practice protected by the central government, the government has often been unable to extend effective and universal control over every square kilometre of its protected areas.[10] Villagers have been known to cut down forest illegally with serious pressure to meet energy needs, particularly in northern Sri Lanka, but overall illegal logging in Sri Lanka is relatively low compared to many countries affected by this environmental problem at the beginning of the 21st century.[2][10]