The culture of San Diego, California, is influenced heavily by American and Mexican cultures due to its position as a border town, its large Hispanic population, and its history as part of Spanish America and Mexico.

Tourism has affected the city's culture, as San Diego houses many tourist attractions, such as Seaworld, San Diego Zoo, San Diego Wild Animal Park, and nearby Legoland. San Diego's Spanish influence can be seen in the many historic sites across the city, such as the Mission San Diego de Alcala, the Serra Museum in Presidio Park, and Balboa Park. Cuisine in San Diego is diverse, but there is an abundance of wood fired California-style pizzas, and Mexican and East Asian cuisine. Annual events in San Diego include Comic-Con, San Diego/Del Mar Fair, and Street Scene Music Festival.

San Diego has a small, but growing art scene. "Kettner Nights" at the Art and Design District in Little Italy has art and design exhibitions throughout many retail design stores and galleries on selected Friday nights. "Ray at Night" at North Park host a variety of small scale art galleries on the second Saturday evening of each month. La Jolla and nearby Solana Beach also have a variety of art galleries.

Several art museums, such as the San Diego Museum of Art, the Timken Gallery, the Mingei International Museum featuring folk art, the Museum of Photographic Arts, and the Museum of the Living Artist are located in Balboa Park. The Museum of Contemporary Art San Diego (MCASD) is located in an ocean front building in La Jolla and has a branch located at the Santa Fe Depot downtown.

Balboa Park hosts dozens of museums and gardens, including the Museum of Man, the San Diego Natural History Museum, the Reuben H. Fleet Science Center, and the San Diego Air & Space Museum (formerly the Aerospace Museum). The San Diego Children's Museum is located downtown. The Columbia district on San Diego Bay is home to the Star of India and seven other floating museum ships and boats belonging to the San Diego Maritime Museum, as well as the unrelated San Diego Aircraft Carrier Museum featuring the USS Midway aircraft carrier.

The San Diego Symphony performs on a regular basis at Symphony Towers and other venues, and is directed by Jahja Ling. The San Diego Opera at Civic Center Plaza, directed by Ian Campbell, was ranked by Opera America as one of the top 10 opera companies in the United States. The San Diego Master Chorale performs both alone and with the San Diego Symphony. Other musical organizations include the La Jolla Symphony and Chorus, Orchestra Nova San Diego (formerly the San Diego Chamber Orchestra), and the music departments of San Diego State University, University of California at San Diego, University of San Diego, and Point Loma Nazarene College. Free concerts of organ music are presented regularly at the Spreckels Organ Pavilion, the world's largest outdoor pipe organ, in Balboa Park.

The Old Globe Theatre at Balboa Park has been in operation for more than 70 years and produces about 15 plays and musicals annually. The La Jolla Playhouse at UCSD is directed by two-time Tony Award-winner Des McAnuff. Both the Old Globe Theatre and the La Jolla Playhouse have produced the world premieres of plays and musicals that have gone on to win Tony Awards on Broadway. More than three dozen local productions have gone on to Broadway; four have won one or more Tonys.[1] In 1984 the Old Globe Theatre received the Tony Award for best regional theater,[2] and the La Jolla Playhouse received the same award in 1993. The Joan B. Kroc Theatre at Kroc Center's Performing Arts Center is a 600-seat state-of-the-art theatre that hosts music, dance and theatre performances. The San Diego Repertory Theatre at the Lyceum Theatres in Horton Plaza produces a variety of plays and musicals. Serving the northeastern part of San Diego is the California Center for the Arts in Escondido, a 400-seat performing arts theater. Other professional theatrical production companies include the Lyric Opera San Diego, specializing in comic operas, operettas, and musical comedies, and the Starlight Musical Theatre, presenting musical comedies in the outdoor Starlight Bowl. There are also numerous semiprofessional and amateur theatrical productions throughout the year by such groups as the Cygnet Theatre, Christian Community Theater, Vanguard Theater, Lamb's Players Theater, Diversionary Theatre, and San Diego Junior Theatre.

San Diego also boasts one of the most eclectic local music scenes in California. Once dubbed the "Next Seattle" during the independent rock craze of the early to mid-1990s, San Diego's clubs and cafe's have produced such pioneering rock acts as Three Mile Pilot, Rocket From the Crypt, Pinback, Thingy, Drive Like Jehu, Clikitat Ickatowi, Unbroken, Swing Kids, Creedle, Battalion of Saints, Manual Scan, Beat Farmers, The Paladins, The Bigfellas, Morlocks, Crash Worship, Greyboy Allstars, Boilermaker, Physics (and Aspects of Physics), The Black Heart Procession, The Album Leaf, Tristeza, and Pitchfork, among countless others. Singer-songwriter Erika Davies is a notable lounge music local act.

Owing to its privileged position on the Pacific Ocean and its warm Mediterranean-like climate, San Diego enjoys an abundance of quality produce and dining. The renowned Chino Farms in nearby Rancho Santa Fe provides fresh organic produce both to local restaurants and restaurants in Las Vegas, Los Angeles, California, and San Francisco. There is also a wine growing industry in nearby San Pasqual Valley and Temecula.

Given its ethnic and cultural mix, it is not surprising that San Diego has a wide range of cuisines. One can find Mexican, Italian, French, Spanish, Filipino, Vietnamese, Greek, Latin, German, Indian, Central and East Asian, Middle Eastern and Pacific Islander food throughout the city. In addition, there are numerous seafood restaurants and steakhouses. The city's long history and close proximity to Mexico has endowed the area with an extensive variety of authentic Mexican restaurants. Regional homemade specialties, border fare and haute cuisine are all readily available.

San Diego's warm, dry climate and access to the ocean have also made it a center for fishing and for growing fruits and vegetables. Long a center of the tuna industry, San Diego benefits from an abundant supply of seafood.

Many of the most popular restaurants can be found in the Gaslamp Quarter, Little Italy, La Jolla, Hillcrest and Old Town. 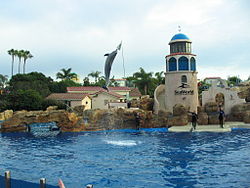