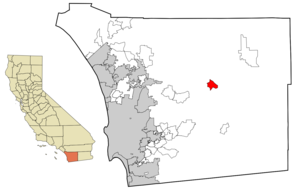 Julian is an unincorporated community in San Diego County, , in the . As of the 2000 census, the population was 1,621.

Julian is an official No. 412. Also, the Julian townsite and surrounding area is defined by the San Diego County Zoning Ordinance Section 5749 as the Julian Historic District. This designation requires that development adhere to certain guidelines that are administered by the Architectural Review Board of the Julian Historic District, which is appointed by the Board of Supervisors. (The "Design Guidelines Manual" is available in at San Diego County's office web site [http://www.co.san-diego.ca.us/] )

The area was originally occupied by the people.

After the , Julian experienced a . This short-lived gold rush was sparked by the discovery of gold in 1869 by a former slave named .

According to a bronze historical plaque appearing in the town, in the early days of Julian, the majority of San Diego County's African-American population resided in or near the town, including the founders of the as well as a noted resident, . Of the 55 blacks living in San Diego County during the 1880 census, 33 lived in the Julian area. Although this information appears on the plaque, it has been the subject of some controversy.

In recent decades Julian has become a quaint mountain resort. The town narrowly escaped destruction in the 2003 that burned much of the surrounding area.

s in and around Julian are mostly dark brown, slightly to moderately acidic sandy loams which are well drained and of variable stoniness. Less stony areas, which underlie most of the townsite, are in the Holland series. The hills around town have rocky soils of the Crouch series. Somewhat poorly drained alluvial loam occurs along Coleman Creek. [http://websoilsurvey.nrcs.usda.gov/app/WebSoilSurvey.aspx]

There were 658 households out of which 31.9% had children under the age of 18 living with them, 56.2% were married couples living together, 10.2% had a female householder with no husband present, and 30.2% were non-families. 24.3% of all households were made up of individuals and 7.6% had someone living alone who was 65 years of age or older. The average household size was 2.46 and the average family size was 2.93.

Although Julian's picturesque setting attracts tourists, recreationalists and antique lovers, the town is most famous for its apple crop. The apple variety grown locally is considered less sweet than most traditional types, but pies and cider made from the fruit have garnered great popularity for nearly 100 years. The town is often very busy on holiday weekends and during the apple harvest season (approximately the month of October).

Winter days in Julian usually are sunny and cool; however, the area experiences several light snowfalls most years, allowing for snowplay and surfing within the same county only an hour apart. In March 2006, a snowfall that that exceeded two feet surprised the residents and blocked private roads, unmaintained by the County, for more than a week.

A number of wineries located in and around Julian offer complimentary wine tasting. These wineries are: Orfila Vineyards, Witch Creek Winery, J. Jenkins Winery, Menghini Winery, and Shadow Mountain Vineyards. Many of these are located along SR 78/SR 79 to the northwest of the town center.

* [http://www.signonsandiego.com/uniontrib/20060209/news_1mi9julian.html The Controversy over the Newton Burial Site]