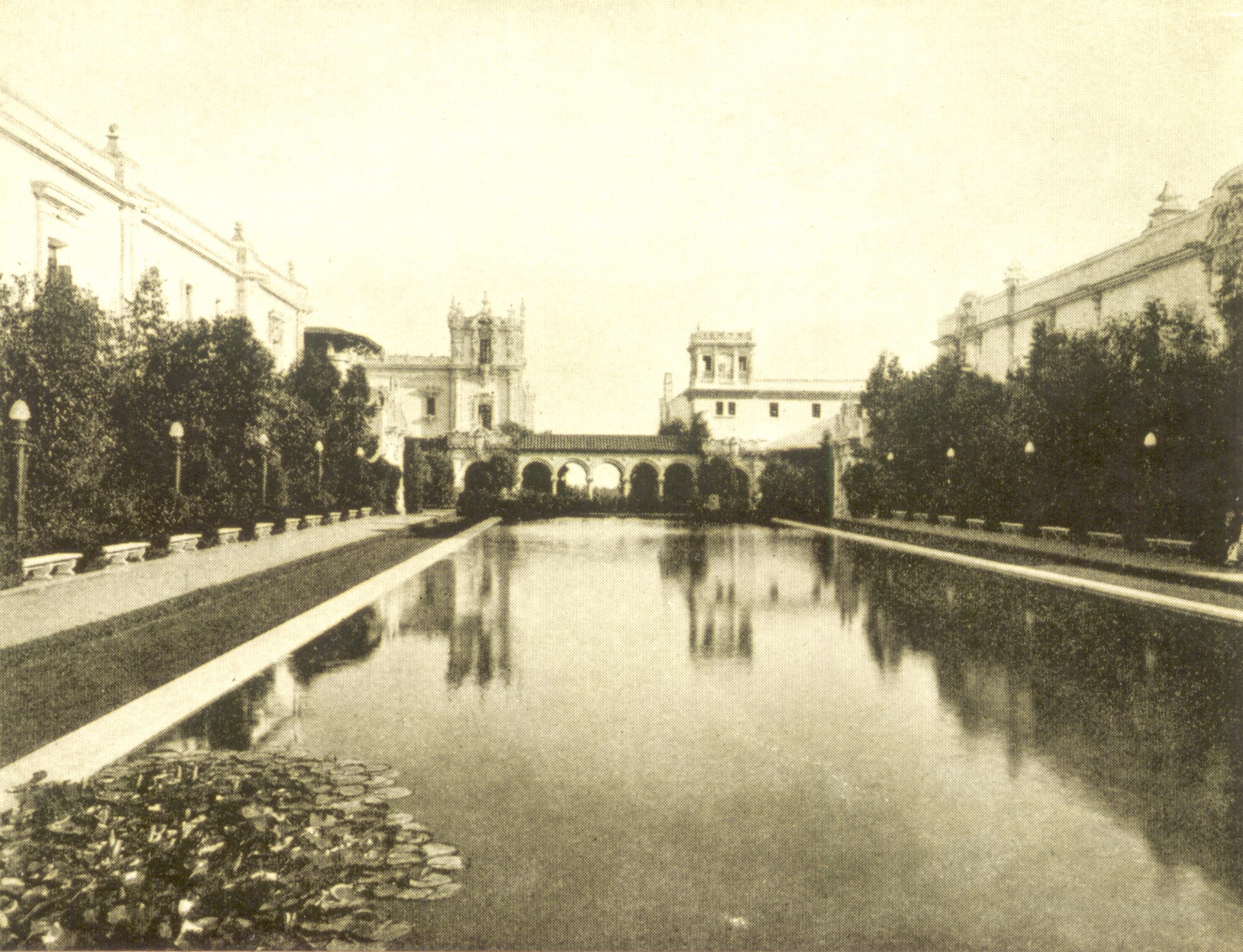 Balboa Park is a 1,200 acre (4.9 km²) urban cultural park in , named after the Spanish explorer . Placed in reserve in 1835, it is one of the oldest sites in the United States dedicated to public recreational usage. Besides open areas and natural vegetation, it contains a variety of cultural attractions including museums, theaters, gardens, shops and restaurants as well as the world-renowned . Balboa Park was declared a in 1977.

Many of the park's attractions are along El Prado, a long, wide promenade running through the center of the park. Most of the buildings lining this street are in the Spanish Revival style, a richly ornamented eclectic mixture of Spanish and Latin American architecture. Along this boulevard are many of the park's museums and cultural attractions, including the , the , the , the the , the Natural History Museum, the , Reuben H. Fleet Science Center, the Reflection Pond, the latticed Botanical Building (which is always free), the Bea Evenson Fountain, and .

Other attractions include the Spreckels Organ Pavilion, which includes the world's largest outdoor pipe organ (always free, plays every Sunday at 2:00); The , a replica of Shakespeare's ; a collection of "international cottages" (see the free shows during high season on Sundays at 2:00); the Botanical Building with its accompanying reflecting pool; the Starlight Bowl; and the largest tenant of the park, the with an 18-hole and a 9-hole executive golf course, various archery ranges, chess, horseshoe, petanque, and lawn bowling clubs, as well as a disc golf course..

Balboa Park is adjacent to many of 's neighborhoods including Downtown San Diego, , Hillcrest, North Park, South Park, and .

Among the institutions within the park's borders not administered by the city's parks department are , (NMCSD), and the .

The city park was made manifest starting in 1835 when the newest breed of San Diego city officials from the took office. One of the first things the city officials did was select a 47,000 acre (190 km²) tract of land to be used for recreational purposes, making the section of land within the this area that is now Balboa Park one of the oldest sites in the United States dedicated to public recreational usage.

No further activity took place until 1845, when a survey was done by Henry D. Fitch to map the 47,000 acres (190 km²). The Mexican government would never get to use this land for anything due to the , and in 1848 the city became property of the United States of America. In 1850, it became part of California with the creation of the state.

On February 15, 1868, a request was put forth to the city's Board of Trustees to take two 160 acre (0.6 km²) plots of land, and create a public park. This request was made by one of the trustees, E. W. Morse, who along with real estate developer had selected a site just northeast of the growing urban center of "New Town" (now downtown San Diego) for the nascent park's location.

Subsequently, a resolution to set aside 1400 acres (6 km²) for a city park was approved by the city's Board of Trustees on , .

Then in 1870, a new law was passed, an "act to insure the permanency of the park reservation." The bill stated that "these lands (lots by number) are to be held in trust forever by the municipal authorities of said city for the purpose of a park" (Christman 14). It was around this time that San Diego residents were acquiring a certain fondness for the park; this is illustrated by their strong desire to keep the park intact when in 1871, there was a documented conspiracy to disassemble and "grab" the park land (Christman 15). This conspiracy, political in nature, attempted to create a bill and speed it through the state legislature before anybody could do anything to stop it. The thwarting of this attempt was due largely in part to a San Diego resident who had somehow learned of the plan then immediately informed higher powers in Sacramento. The conspiracy was leaked to the press thereby exposing the city officials involved. Immediately, other San Diegan officials got together and collected signatures supporting the current existence of the park. Their plea was successful.

For the first few decades of its existence, "City Park" remained mostly open space. Numerous proposals, some altruistic, some profit-driven, were brought forward for the development and use of the land during this time, but no comprehensive plan for development was adopted.

Nevertheless, there was some building done. This included an and women's shelter (later burned down), a high school () and several gardens maintained by various private groups. One of the most celebrated of these early usages was a nursery owned and maintained by local horticulturist and botanist , who is often referred to as "the mother of Balboa Park." Although owned by Sessions, by agreement with the city the nursery was open to the public, and Sessions donated trees and plants to the city every year for its beautification. Sessions is responsible for bringing in many of the different varieties of exotic plants in the park. Her work was so progressive that she was in fact the first woman awarded the for "foreign plant importation" given to her by the American Genetic Association.

Other developments from this time include two reservoirs, an animal pound and a gunpowder magazine in the area now known as Florida Canyon.

The earliest recreational developments in the park were in the "Golden Hill Park" area off 25th street. The National Register listed rustic stone fountain designed by architect Henry Lord Gay is the oldest surviving designed feature in the park. Other attractions in the area included a children's park (probably the first in San Diego), walking trails, and a redwood bird aviary.

Much of the park's look and feel today is due to the development done for the 1915 Panama-California Exposition. The Exposition was to celebrate the completion of the , set to open in 1915, and to tout San Diego as the first U.S. port of call for vessels traveling north after passing through the canal. Planning began in 1909 and City Park was soon selected as the exposition site. The name Balboa Park was adopted in 1910. Groundbreaking began in 1911.

The head architect for the Exposition was New York architect , previously known for his Gothic revival churches. For the fair Goodhue adopted a highly ornamented style, which proved influential in and around San Diego and elsewhere in the American southwest. Goodhue's associate architect was Carleton Winslow, who is solely credited with the lattice-work Botanical Building and others. Goodhue's team won out over local contender .

On December 31, 1914 The Panama-California Exposition opened. Balboa Park was crammed full of spectators. All of the guards, workers, and supervisors were dressed in Spanish and Mexican military uniforms, and the entire park was filled with different and foreign plants. Yellow and red were the themed colors of the event and they were everywhere. Over 40,000 poinsettia flowers were used, all of them in full bloom. The event seemed successful in attracting national attention. Even Pennsylvania's made a brief three-day appearance. The attempt to put San Diego on the map had worked. The event was a success: over the next two years over 3.5 million visitors would attend and witness the hard-sought magnificence that was Balboa Park.

* Balboa Park's Casa Del Prado Theater is the home of San Diego Junior Theatre, the country's oldest children's theatre program.
*In , Balboa Park was the San Diego level.
*'s "Desire" had one scene of a September 2006 episode filmed on location at Balboa Park in the Spreckels Organ Pavilion.
* In , scenes from Charles Kane's (Orson Welles) mansion "Xanadu" were taken from buildings in Balboa Park. Also, the animals seen in the movie were from the San Diego Zoo.
* In Balboa park is featured in the level of the game
* The are held in Balboa Park yearly.
* The internet series often films their sketches at Balboa Park
* Bruce Springsteen recorded a song about Balboa Park on "The Ghost of Tom Joad"