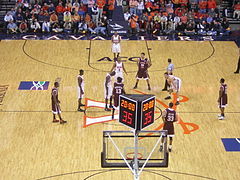 Virginia Tech meets Virginia for the Hokies' first visit to John Paul Jones Arena on March 1, 2007. The Cavaliers won the game 69-56, and clinched a share of first place in the final ACC standings for their 5th regular season title.

The Virginia–Virginia Tech rivalry is a team rivalry, across many sports, that exists between the Virginia Cavaliers and Virginia Tech Hokies. The athletics programs are members of the Atlantic Coast Conference. In sports that use divisions such as college baseball and college football, they are both in the Coastal Division along with Duke, North Carolina, Georgia Tech, and Miami.

In the 2005-06 and 2006-07 school years, the program-wide rivalry was called the Commonwealth Challenge.[1] The Cavaliers won both years of the Challenge but future sponsorship was not sought out of respect for the Virginia Tech massacre. Virginia athletic director Craig Littlepage stated at the time that "now is not the time to be talking about bragging rights." [2]

† Virginia Tech does not field a varsity men's lacrosse team.

^ Hokiesports.com has results for men's soccer back to only 1975, but Virginiasports.com has a record of results going back to 1960.[5]

Now in the same conference, the two schools agreed to face off in a Commonwealth Challenge across all sports in 2005. The Challenge continued through 2007, with the Cavaliers winning both years of the competition. It was discontinued "in the short term" after the Virginia Tech massacre, although a score was tallied on February 21, 2008 by the Roanoke Times using the scoring system of the previous two years. UVA would have been leading the 2007–2008 competition as of that date, 7 to 6.[6]

The Virginia/Virginia Tech rivalry has existed since the last 1800s, but has only come to preeminence in the last twenty years. Traditionally, Virginia's primary rival has been the Tar Heels of the University of North Carolina at Chapel Hill- known as the South's Oldest Rivalry. Virginia Tech's rival was the Virginia Military Institute, with whom they shared a military tradition and similar acronyms (VMI vs. VPI).

The UVA/Virginia Tech rivalry began in earnest in 1899, a year that saw Virginia take on northern powerhouses Penn and Michigan. Virginia's final game of the season was against a squad in the middle of a disastrous first full season, a fledgling land grant school in Blacksburg, Virginia, that had only just progressed into a four-year campus- Virginia Polytechnic Institute. That game, a 28-0 decision for Virginia, was a footnote in their 4-3-2 season that year- but for at least one Virginia Tech student, it was much more.

Hunter Carpenter, a 15-year old from Clifton Forge, enrolled at Virginia Tech in 1898. Though he had never touched a football prior to enrolling at Tech, following the blowout of the 1899 game, he became a man possessed by one thing- beating Virginia in football. However, after five years of college, Hunter Carpenter graduated from Virginia Tech without achieving his goal. Infuriated, he transferred to the University of North Carolina. "I just want to beat the University of Virginia," Carpenter was quoted as saying by the Associated Press, in reference to his move to Chapel Hill. However, as a standout on the Tar Heels' football squad, he again failed to win against Virginia for two years in a row.[7]

Carpenter returned to Virginia Tech in 1905 for a last shot at beating Virginia. Going into the 1905 game, Tech was 0-8 against UVA by a cumulative 170-5 score. The Cavalier Daily, student paper of the University of Virginia, ran a story outlining Carpenter's motives and move from Virginia Tech to the University of North Carolina, and then back to Virginia Tech. Virginia accused Carpenter of being a "professional" player- as eligibilty rules were much looser back then, it was not uncommon in those days for players in their mid to late twenties to travel from school to school, loaning their services out to football powerhouses such as Ohio State and Alabama to give them an edge in rivalry games.[8]

Carpenter signed a sworn affidavit that he was an amateur player and, against a backdrop of recrimination, the game was finally played. Carpenter scored, and Tech took an 11-0 lead. Carpenter was ejected midway through the game for throwing the ball at the face of a Virginia defender, but stayed on the sidelines to watch as neither team was able to score against each other. Carpenter left immediately after the game and moved to Middleton, New York, never to return to the Commonwealth. The University of Virginia refused to play Virginia Tech again until 1923.[9]

Some from outside the state are surprised to learn that the rivalry can be a bitter one; analogies have been made to the Green Bay Packers and Chicago Bears rivalry, in both it's intensity and scope. Former Ohio State quarterback and football analyst Kirk Herbstreit said in 2004 that he "never realized how much those people hate each other." He went on to say "when I was down in Blacksburg, I said some nice things about Al Groh and it was like I had turned my back on them."[10] This is particularly remarkable considering that the University of Virginia has been a long-time advocate for their in-state rival, from advocating for their admission into the ACC, to defending them from the NCAA's attempt to banish Virginia Tech from all collegiate sports in 1951. [11]

However, many of the teams' respective fans are cordial to each other, and it is not uncommon to see Virginia fans rooting for Virginia Tech teams (and vice versa) when they are competing against teams from outside the Commonwealth. Many families have children who attend both schools, and the two schools often hold sorority, fraternity, and other social functions together. Yard flags, mailboxes, and vehicle decals displaying the colors and logos of both teams are common, even in each team's home territory.

Despite the intensity of the rivalry, Virginia Tech owes its membership in the ACC to the University of Virginia.[12]

The Atlantic Coast Conference initially planned to add Boston College, Miami, and Syracuse to the conference lineup. Talks with Syracuse stalled as Jim Boeheim vocalized his opposition to the move, and Duke, UNC, and Virginia consistently voted against adding the Orange. When it became obvious that Syracuse lacked the necessary seven votes, U.Va. President John T. Casteen III took the opportunity to suggest the ACC consider Virginia Tech on June 18, 2003[13]. Duke and UNC voted against the Hokies, but with Casteen's support Virginia Tech was invited to the conference with 7 out of 9 votes. Miami and Virginia Tech joined the ACC in 2004, with Boston College joining in 2005.

The primary significance of this development to the rivalry was that the athletic teams from the two schools would now be mandated to play every year. For instance, the men's college soccer teams did not face each other in any of the four seasons between 2000 and 2003. They have since met every year after Virginia Tech became a conference member in 2004. Additionally, in some sports where there was already an agreement to play each other on an annual basis, the teams might now play more than once. For instance, the men's college basketball teams had played each other annually since the 1934-35 season but not faced each other twice in the same season since 1983-84. Starting with the 2004-05 season, the teams have played at least twice each year, and in 2005-06 the teams met for a third time in the ACC Tournament.

Many fans on both sides of the rivalry have reported a lessening of hostilities between the two universities while maintaining the same intensity of the rivalry in the wake of the Virginia Tech Massacre. According to The Washington Post "students in both camps are more apt to think of themselves as simply Virginians." UVa students were amongst the first university students to lend support to the comrades at Virginia Tech in the wake of the shootings. Likewise, the connections between the two university's populations are often very close. Prior to the 2007 football contest in Charlottesville both college's bands participated in a joint performance. However, the intensity of the rivalry was still as spirited as ever, with both sides cheering passionately for their own team as a berth to the ACC Championship game was on the line.[14]

U-Va.'s student newspaper reported that students in Charlottesville were even sporting Hokie sweatshirts on occasion in observance of the tragedy. The University's Z Society went so far as unveiling a 65' x 120' Virginia Pride flag featuring both UVA and VT logos on it during the annual football game, and it was noted that the two fan bases had never been so close as they were after the shootings.